The 18th and why it was a bloodbath. family stories and birthdays. 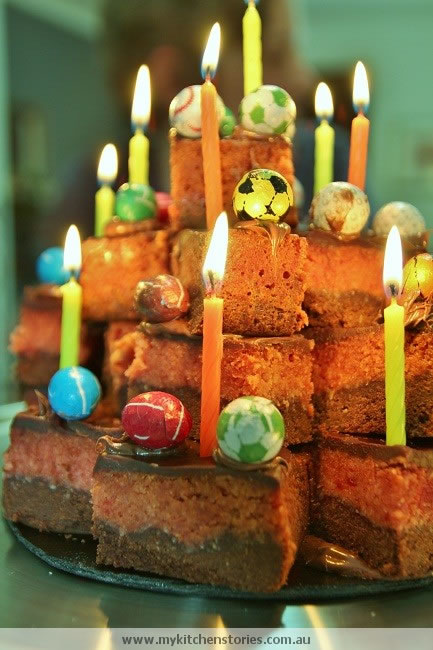 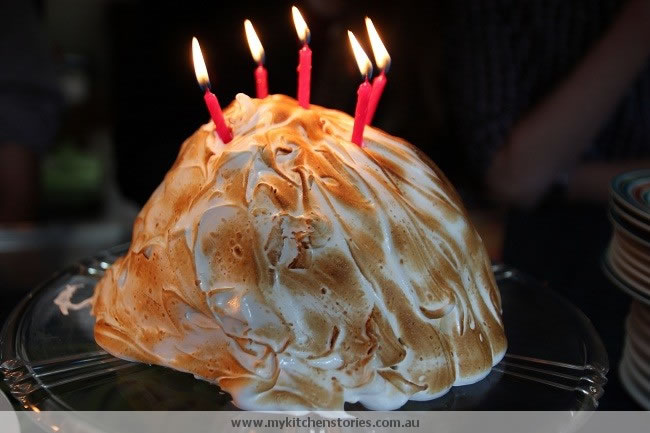 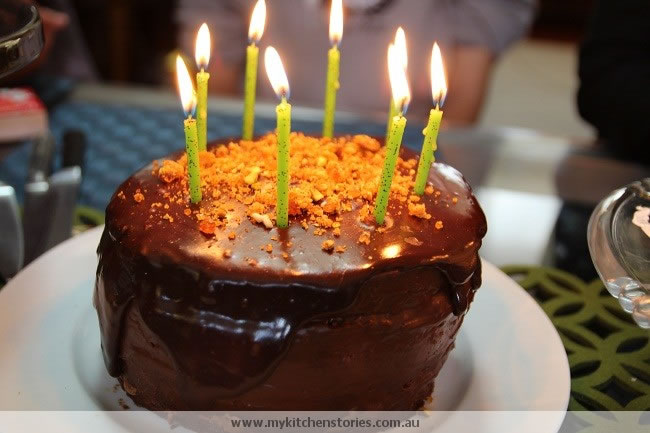 Today is the day.

The day of the year that I always make three cakes. The three birthdays were even more special this year  2 x 18ths and a 13th. Skaters cousins are growing older at the same rate as he  is…..go figure.

Life happens so fast that one minute you have a cute little baby …..the next minute he is nearly six foot and has a beautiful girlfriend. I long for the days when he was small and innocent and cuddly but am equally glad that he is a strapping teenager with a life of his own. Isn’t that strange?

Grozby still cute as ever even though she is all grown up………….She is also part of the family celebrations. When we were having cake she stole the game controller 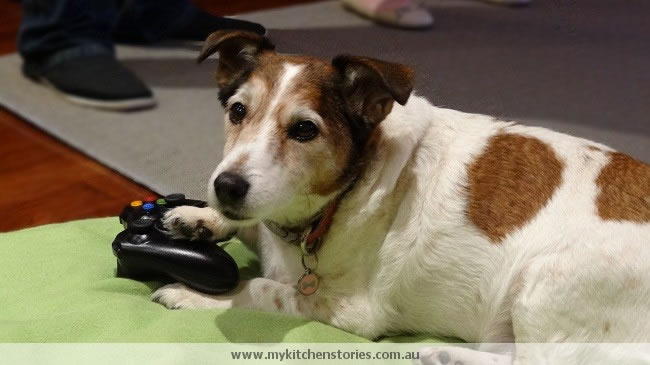 The family converged like a flock of hungry seagulls at my sisters house, about an hours drive away. A horn beeping, stress induced drive over the Sydney Harbour Bridge and along the Pacific Highway to the North, on a Saturday morning.  I was taking all the food and the three cakes, a frozen Baked Alaska, Cherry Ripe Tower and a Nutella sponge. The day dawned fine and sunny for the first time in weeks.  Is someone up there watching?  I scurried around trying to find eskies, and makeshift refrigeration so that we didn’t find three puddles of fruit and chocolate when we opened the boot on arrival. Skater and his girlfriend were busy….. attending to themselves and couldn’t help. Once I had coaxed them to help me load the last of the food, Skater popped his L plates on and sat in the drivers seat. Could there possibly be any more stress introduced this morning?

Petrol?? Air in the tyres?? Do these things only need to be done when you are in a hurry….do these things only happen to me?. We had a little altercation when it came to filling the tank and pumping the tyres. Enough said, just let me say the pressure in the car had risen along with the tyres. We set off and things seemed to be going OK. I had really only panicked and tried to use the passenger side brakes once so far, and we were half way there. As we approached a very large intersection and were at a grinding halt in the traffic, sitting there in the inside lane, the sun beating down on the car, the aircon on 4, the air of tension starting to melt away finally,  I looked at Skater and he looked at me and he said

“OMG what? ” was all I got out before his nose erupted.  This is something that happens to him, and he let go of the wheel and cupped his hands, while I looked on in horror. Once I  found tissues and dispensed half a box we were able to concentrate on the fact we were in the middle lane of a traffic jam. Skater offered to steer with his knees ( or thighs) but I just didn’t feel that this was appropriate as he has only just mastered steering with his hands . 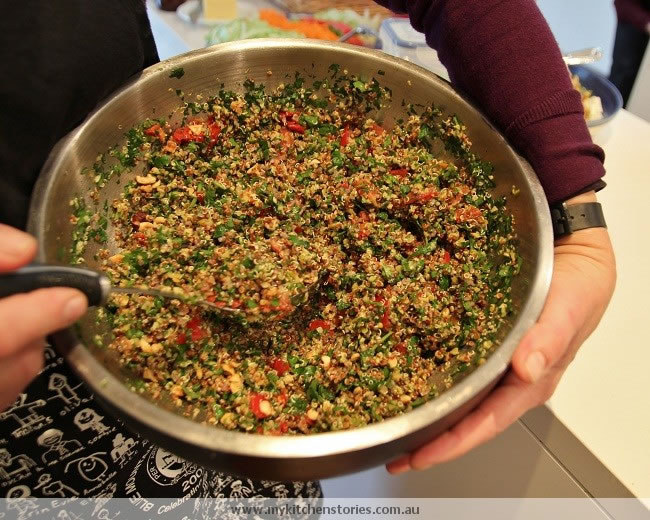 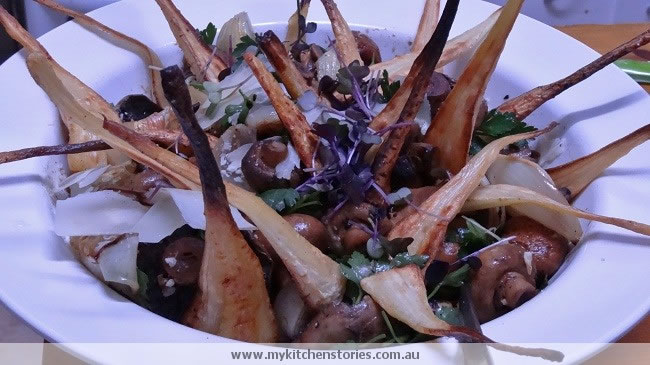 It was clear that the situation was not going to improve and after we inched forward,  me steering and Skater accelerating while holding the bridge of his nose.  We formulated a game plan; put the car into park then I would jump out and run around to the drivers seat while Skater climbed over into the passenger seat. We counted to three. The trouble is when I panic I cant remember how to do things…..like open the door…I couldn’t do that!!. So the first attempt stalled. After another three I managed to work the door handle running around the back of the car, horns beeping and people staring. I scooped up to the L plate from the rear and swiped the L plate from the front in two blurry actions, in time to see Jay climbing over the seat with wads of tissues clamped to his nose.

Chicken cakes  with chickpeas and coriander 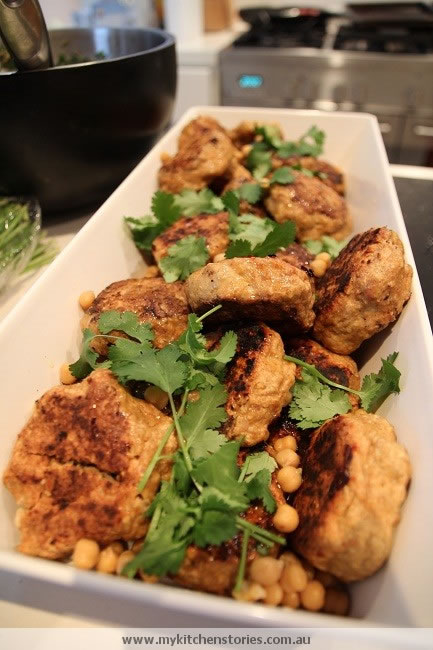 Apparently, you hold your nose in a certain place for 20 minutes and if it hasn’t stopped by then you hold it for another 10. If it is still bleeding after this you go to the hospital. I am not sure if this is true as Dr Google told him. All I know is that it was scaring me, we had exactly that long left to drive, the box of tissues was nearly empty and I was imagining all kinds of terrible things happening to him along with …what was I going to do with these cakes if we had to go to the hospital ( is that a bad thing to think?)…… 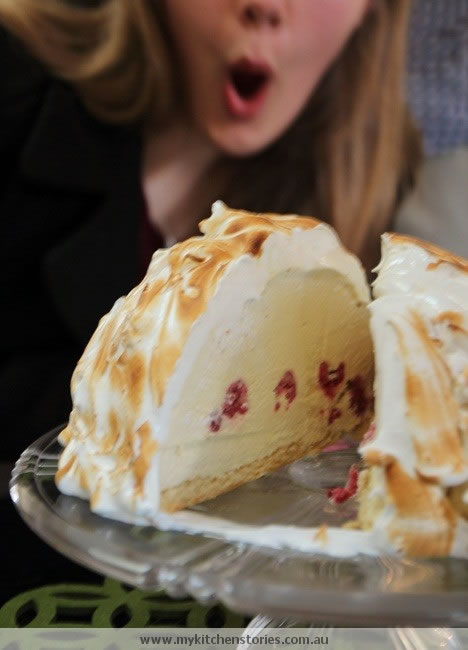 When we pulled up at my sisters house it had magically stopped… literally just then. Naturally this meant he could sit down and take it easy as I unloaded the car………. The Nutella Cake had a bit of a lean but the Baked Alaska filled with golden syrup icecream was still frozen and just needed to be coated in meringue. The Cherry Ripe tower needed to be covered in Chocolate playing balls and of course the other food needed to be prepared but at least we weren’t at the hospital.

I am going to re-share my recipe for Cherry Ripe Slice with you as it is one of my most popular blog posts. Stay tuned for Baked Alaska . 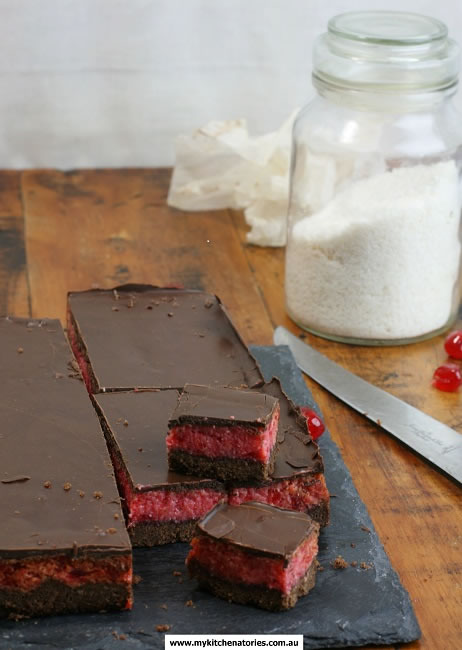 This was the first party and cake for Skater . He’s had a couple more since.

0 shares
Previous Post: « Churros & Chocolate Sauce easy to make at home!
Next Post: Chorizo Meatballs. Balls, and a side of School Social Fun »