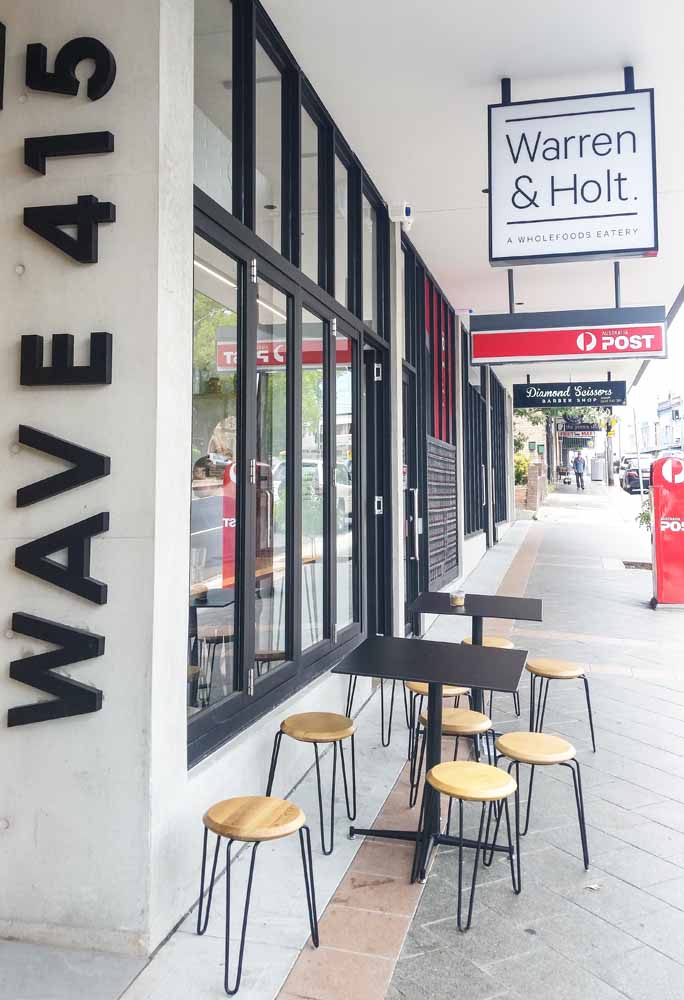 The white walls and blonde wood furniture at Warren and Holt are the first thing that is surprising about this new arrival  to Marrickville, in Sydney’s inner west. The design has strayed far from the grungy Grandmas lounge room look, the decore preferred by Cafes and bars in this precinct. There are streamlined wooden benches following the lines of the walls to create eating spaces all around the well used space each with black iron legged wooden stools and chairs. There are matching black shelves, plants and big black metal windows that can open onto the street. 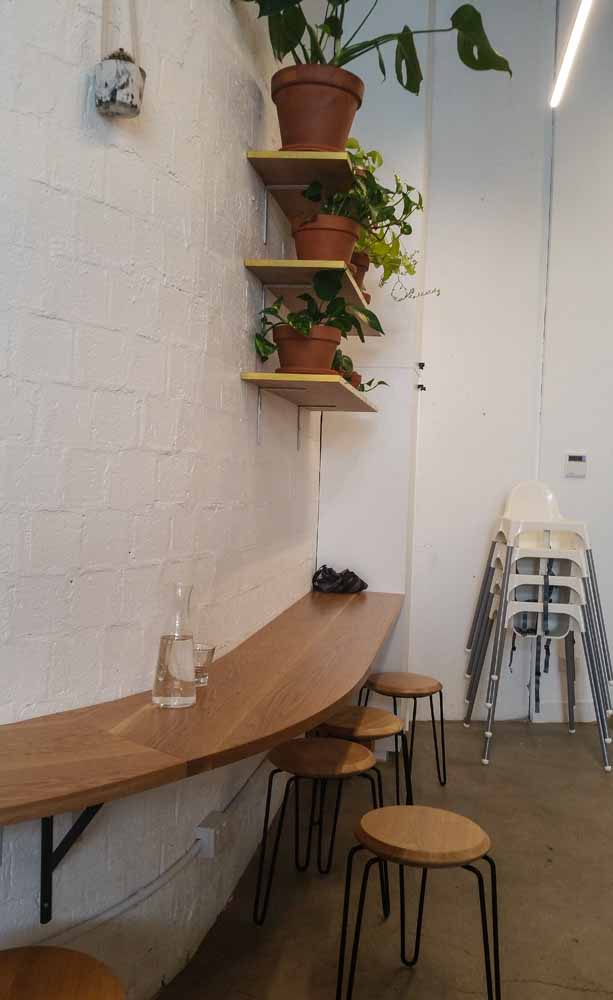 It’s Saturday and I’m driving through Marrickville at lunch time on the unusual occasion that I have a Saturday off. As if that’s not exciting enough I realise I am in just outside a cafe I ‘ve seen on Instagram just the day before. Fate I’d say and hunger, two very compelling reasons to try the newest cafe on the block.  The front bi-fold doors are firmly closed and the air-conditioning is on. It looks bright and clean and there are about 5 people in the clean open kitchen, that also serves as the washing up area and the coffee station. It’s only chalked up a couple of weeks of service yet, so there are no lines down the street but that’s sure will happen soon. 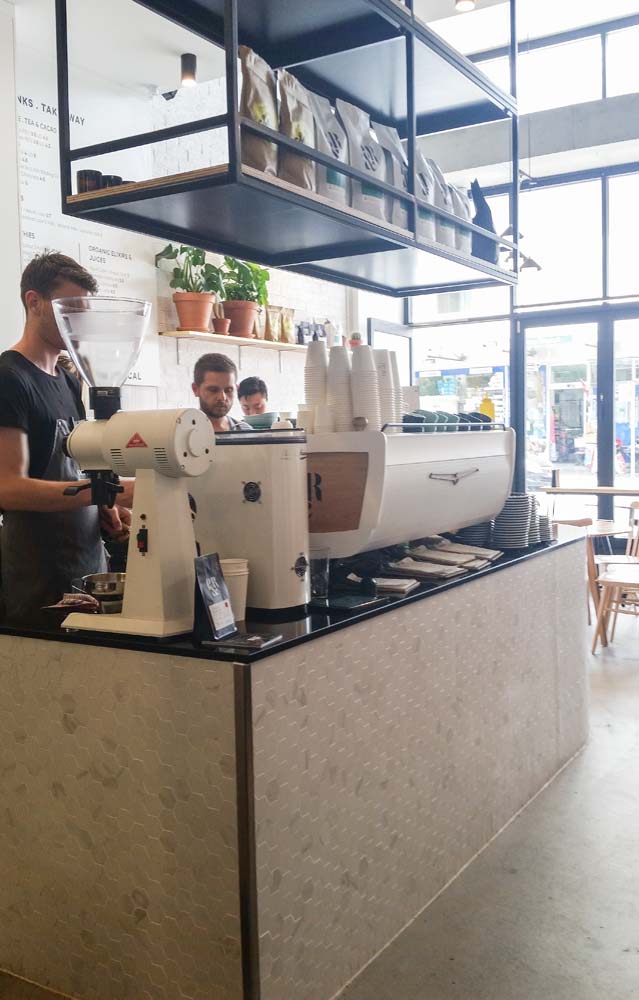 Open from 7 am to 3 pm except Tuesdays the breakfast and lunch menus make my choice of what to order seem daunting as there are so many things I’d like to try. They describe them selves as: 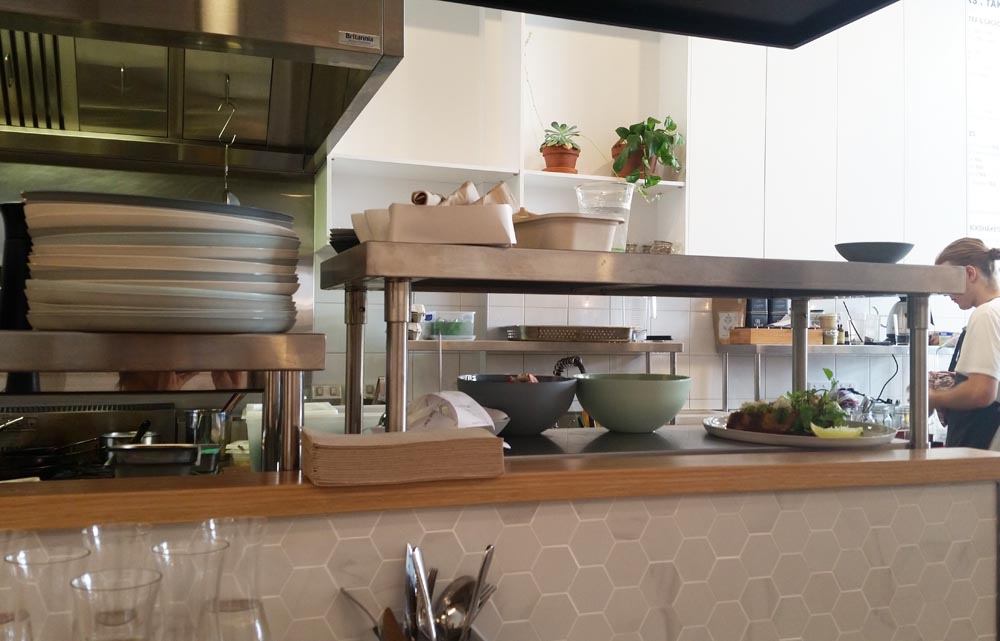 The menu is quite extensive and isn’t dominated by eggs, although if you do eat eggs they’ll be organic and free range. There menu has balance, vegetables, wholefoods, grains and sustainable meats that focus on organic and gluten free, but at the same time it doesn’t feel like it is pushing a cause. The Chicken with thyme and quinoa crust and charred broccoli ($22) also comes in a kids portion with either sweet Potato fries or mashed Pumpkin ($10). You could try the Holt burger, 100% grass fed beef burger patties with caramelised onions, greens and sweet Potato Fries $20, which is also on the kids menu ($10). The burger arrives with a generous portion of Sweet Potato “chips”.  These are sprinkled with chickpea flour and baked till golden. You can have a brioche bun or choose a gluten free sprouted quinoa bun instead. Oh and don’t worry you can get also get both avocado on sour dough and your hit of kale too. 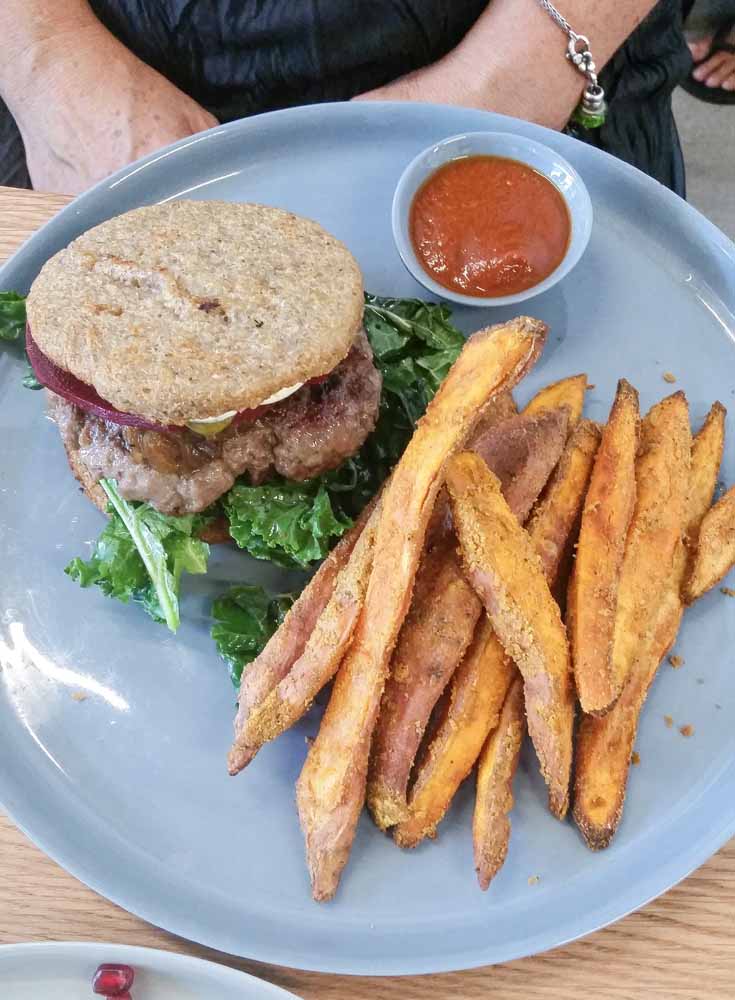 You just have to respect a cafe that does a nourishing “bone” broth with choices of contents like free range Chicken or just vegetables if you like. There are so many choices I am flustered and ask the owner for advise. In the end I order an Eggplant Stack that has orbs of creamy babaganoosh, and roasted eggplant and zucchini all neatly shredded served with leaves of crispy dry roasted eggplant chips. The beautiful handmade ceramic plate is doused in drizzles of bold pesto vinaigrette and pops of pomegranate seeds. I scoff every last morsel for my $22.00. There are plenty of tempting sides to have here too. Lashings of cashew cheese, mushrooms, avocado and salads. 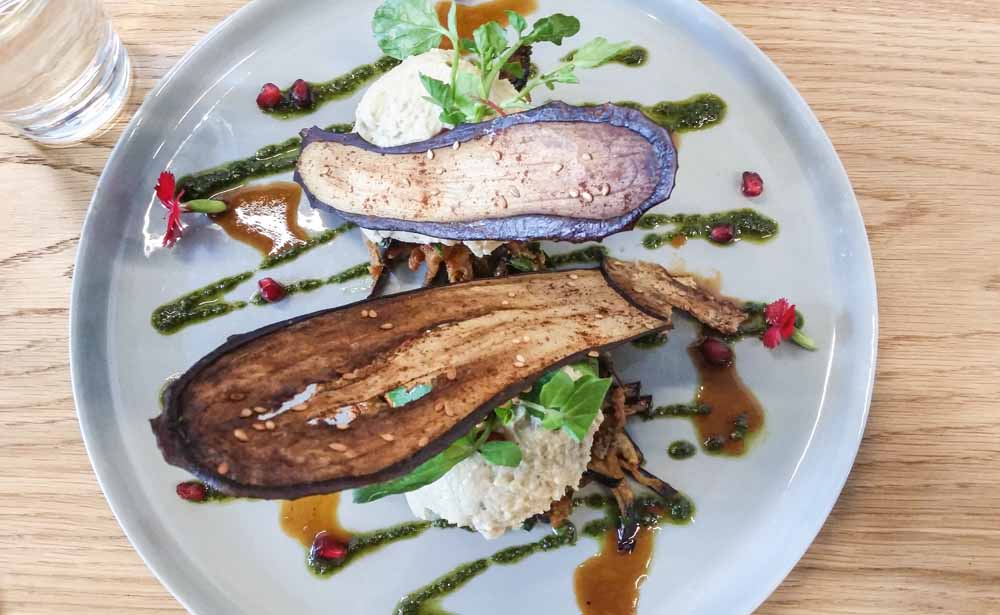 A glass dessert cabinet at the entrance is full of colourful looking treats, some house made alongside goodies Pana Chocolate (desserts without preservatives, dairy, soy, gluten or refined sugar) and Naked Rawr (raw, dairy and gluten free organic treats). This isn’t really my thing because I do love sugar…..but they look very good. 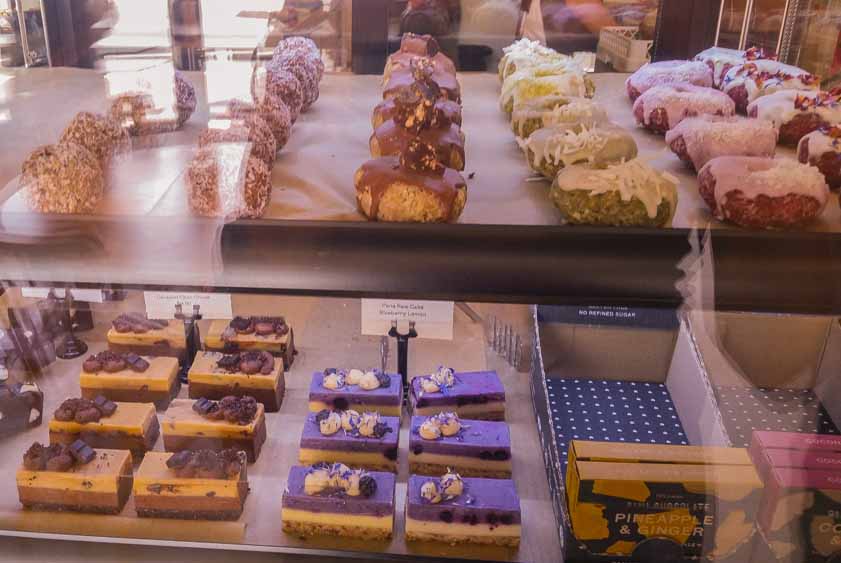 If you are serious about coffee so are they.

They buy from Sydney coffee roasters Pablo and Rusty’s . This week they are featuring a Yara AA from Kiambu, in Kenya it’s cold brewed to beat the heatwave. ( this summer). The sign explains the coffee and says

“with flavours of lemon/lime cordial, red wine and molasses, this single origin coffee is all kinds of refreshing and energy-boosting yum!”.

Also watch out for their @madebycow raw milk lattes. 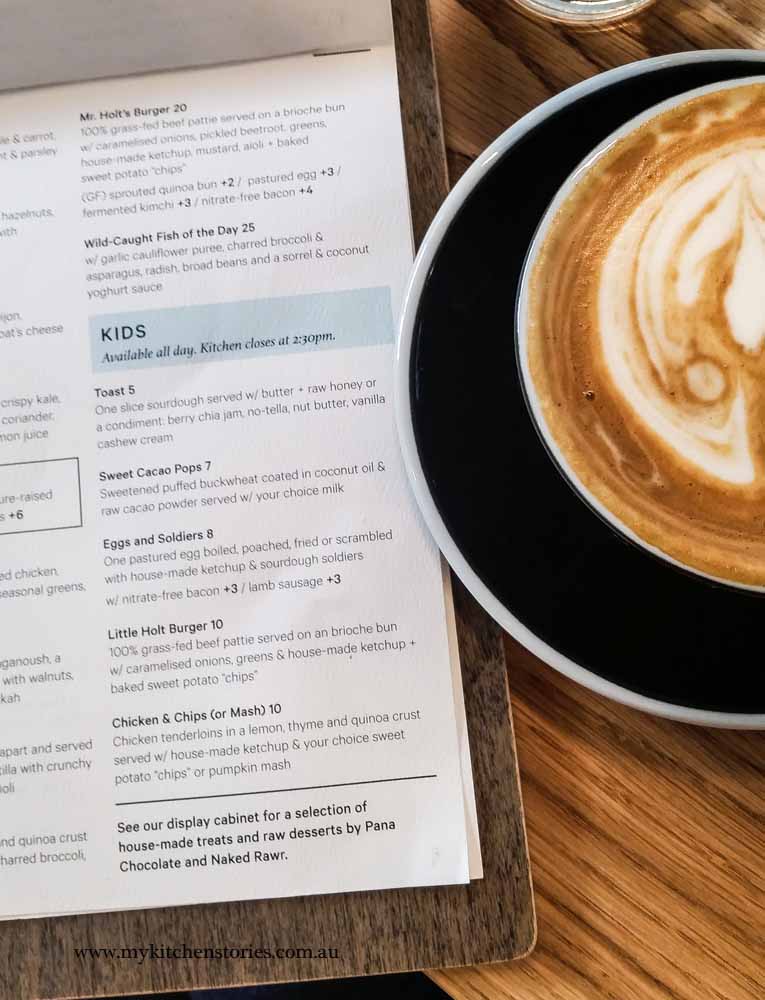 Are you into Turmeric lattes?

Well, so are they. They have an organically-grown, hand-blended one and named I AM GOLDEN.  It’s served in a bulbus looking glass you can wrap your hands around. Tea by @littlewildlingco 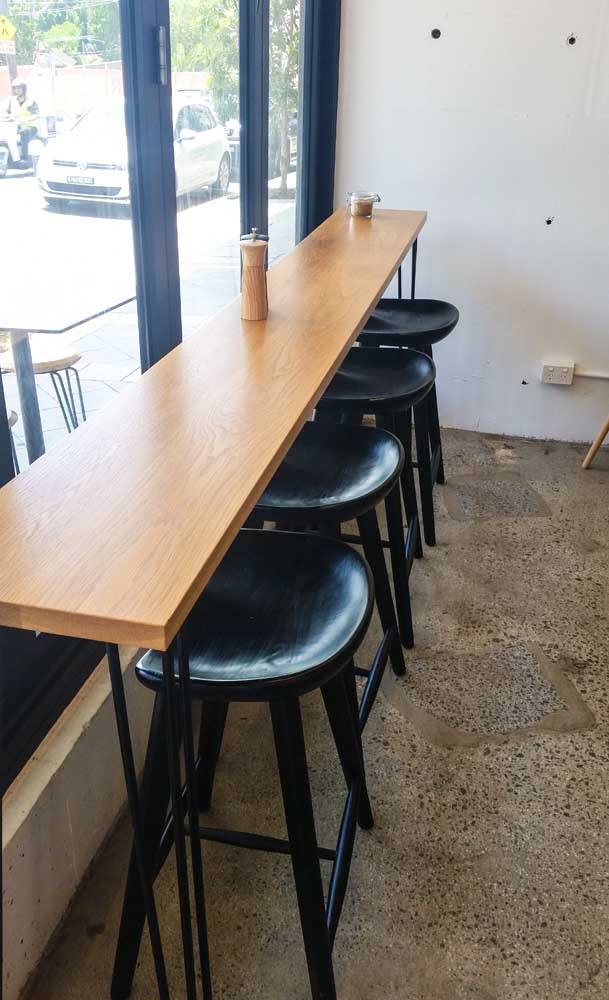 After all that they have intrigued me with their name Warren and Holt.

It sounds a bit quirky but it incorporates some of the local areas more interesting history, and now that I do Food Tours in the suburbs I can’t get enough history!  If you are interested here’s a little piece of it.

Only 7 km from the city centre, Marrickville was once extensive open land on the Cooks River. The area was broken into huge estates and sold to wealthy settlers. One of those was businessman Thomas Holt (1811- 1888), who built a Victorian Gothic mansion named ‘The Warren’ in 1857 in Marrickville South. He decorated it with artefacts from Europe and filled the extensive formal gardens with arches, urns and statues keeping exotic animals brought in from around the world. There were also bathing sheds and a Turkish Bath built on the river. The 100-acre (0.4 km2) property covered the area from Unwin’s Bridge Road to Illawarra Road and Warren Road. He bred rabbits too, strictly for the purpose of hunting. This is what gave the mansion it’s name “The Warren”.  After he returned to London in 1884 “The Warren” became a Nunnery. It was bought by an order of French Carmelite Nuns, who let the property become derelict, and were eventually evicted for outstanding debts. During the early 1900’s it was used as an artillery range by the government, before being demolished and subdivided in 1922. That house had some stories. 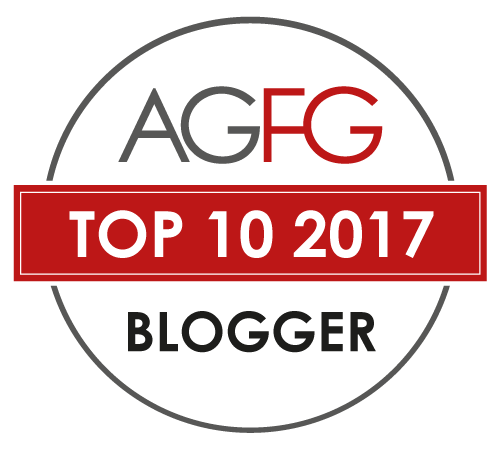 I am very proud to have won a little award. I contribute to the Australian Good Food Guide. It’s a great site and well worth reading for news on Australian restaurants, travel and chefs. See it here.