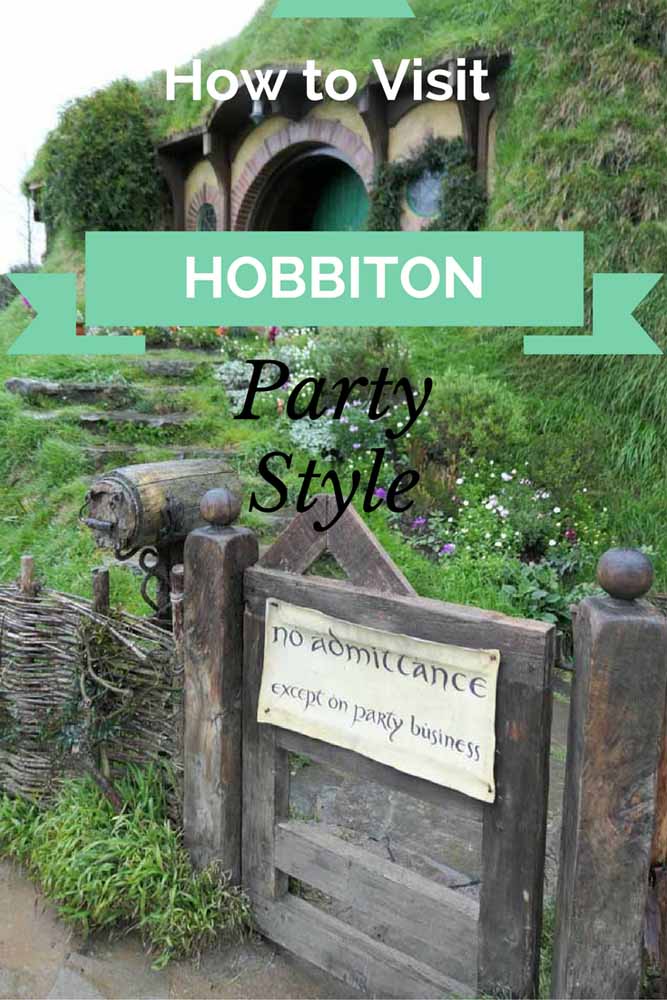 The Hobbiton movie set is one of the main locations for the filming of The Hobbit movies and the Lord of The Rings trilogy. It’s now a permanent tourist attraction that remains on the original family farm a few kilometres out of the Matamata township.  The Alexander family have lived here since 1978 and allowed the use of the property for filming. Construction began in 1999. The site proved to be so popular they have formed a partnership to make the Hobbiton set a permanent attraction. So, you can visit the set passing some of their 13,000 sheep on the way. This is still a working farm. 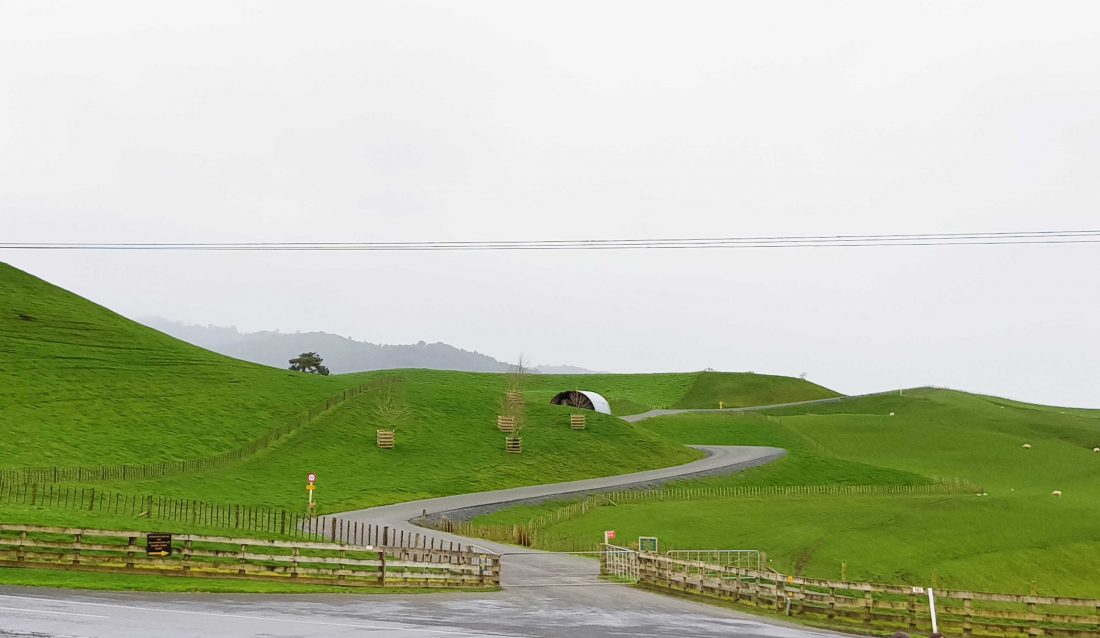 The Alexander farm where it all began.

Even if you are not a huge fan of the movies this is a magical tour.  Every aspect of the adventure has been considered carefully. It all starts in Matamata about 3 hours south of Auckland. You can get on a tour leaving Auckland but we drove and stayed the night because we chose a late afternoon tour. (We stayed at The Tower Motel in Matamata). We caught a small shuttle to and from the set run from the I-Site in Matamata. (I- sites are tourist information centres and places to book tours and can be found all around New Zealand).  This site really looks the part. How very cool is that building?  Even on this small shuttle ride they dial up the excitement by starting you off with a taste of one of the Hobbit movies. 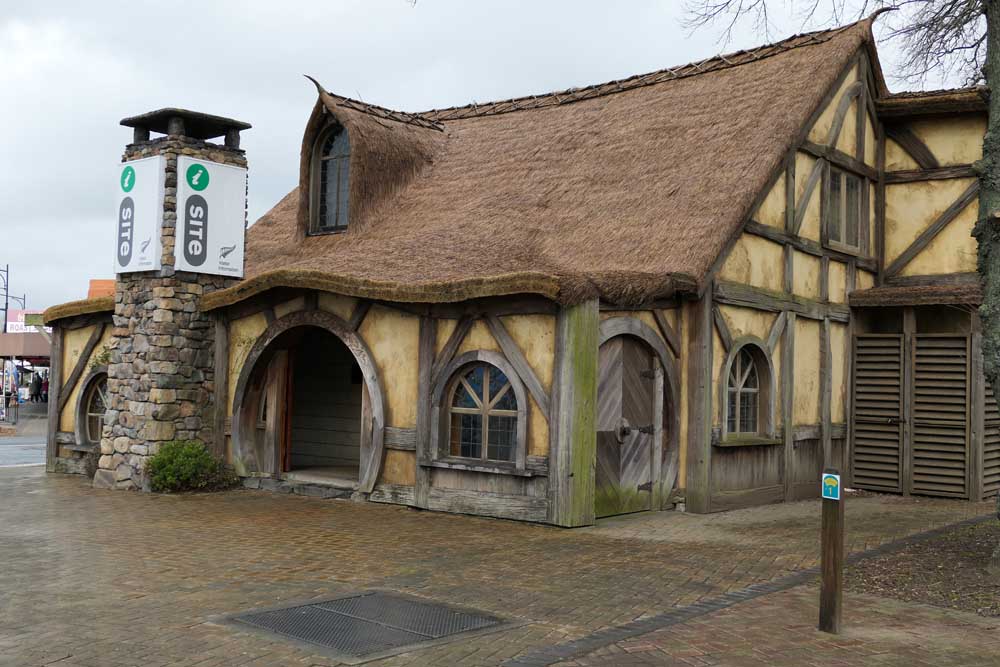 Once you arrive at the farm gate all tours leave the main reception area. Our Banquet tour departs around 3.30 pm and only runs on a Sunday and Wednesday evening. To get out to the set everyone climbs into a couch. It’s another journey with a short film, music and excited chatter as our tour guides begin the stories. The enchanting emerald green hills are a backdrop as the winding roads take us deeper into far reaches of the farm where the film set is situated. Even Peter Jackson himself, makes a film appearance to welcome you, heightening  the excitement.

Come on in…………let the party begin. 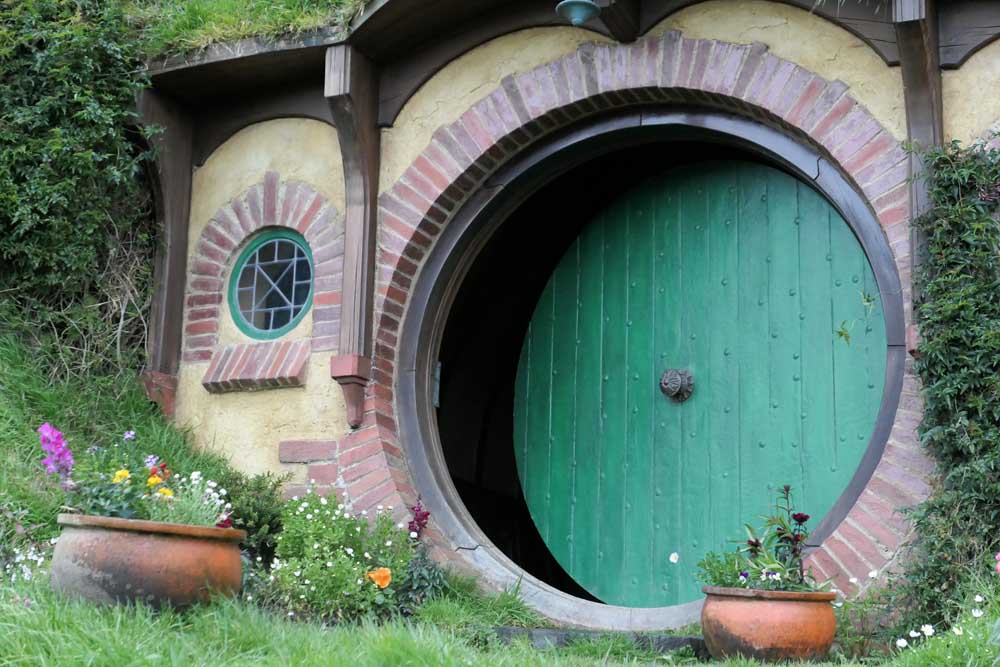 Hobbit Holes in the Hills

Thirty nine hobbit holes were built,  around a man made lake, spanned by a bridge originally constructed with wire and Styrofoam. The little pathways, lanterns and street signs have a team of permanent maintenance staff that also grow vegetables and trim the little village trees. They hang the washing and chop the wood keeping everything looking like a perfectly maintained village. The Green Dragon is a working “Inn” and you can drop in for a drink after your tour. It also houses the restaurant and Banquet room where we will have dinner. (It is part of the Inn at other times)

Filming for the three Lord of the Rings movies started in 1999 and lasted 3 months. The Hobbit wasn’t filmed till 2011 and only took 12 days. 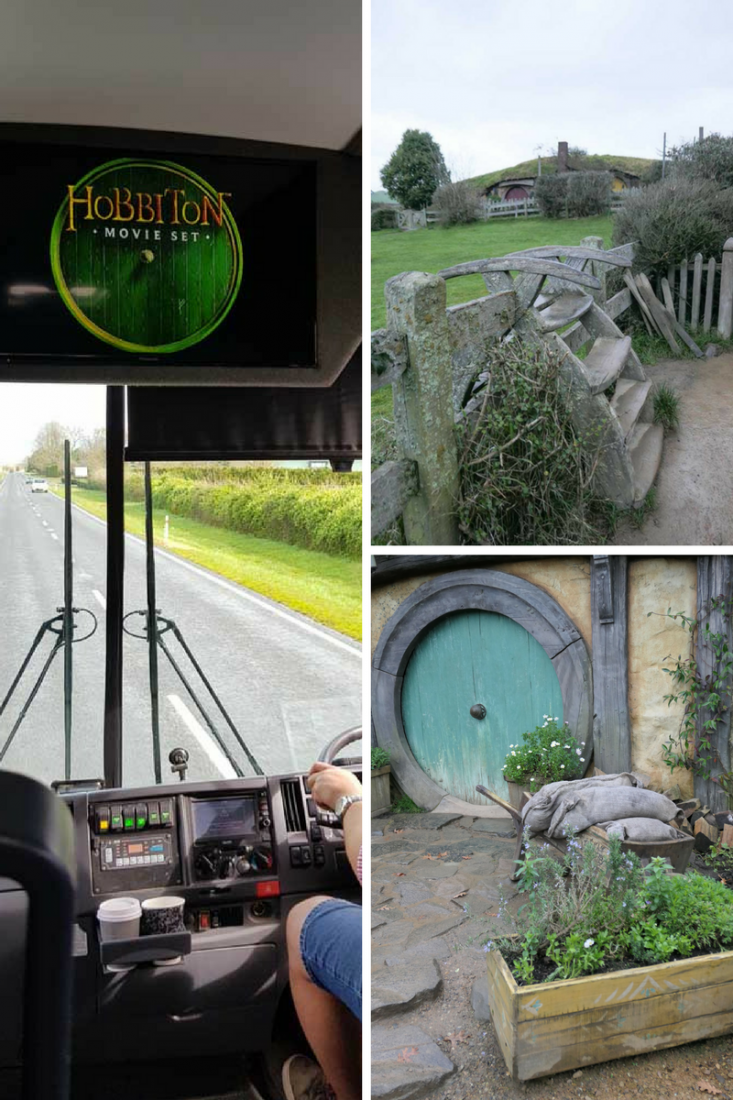 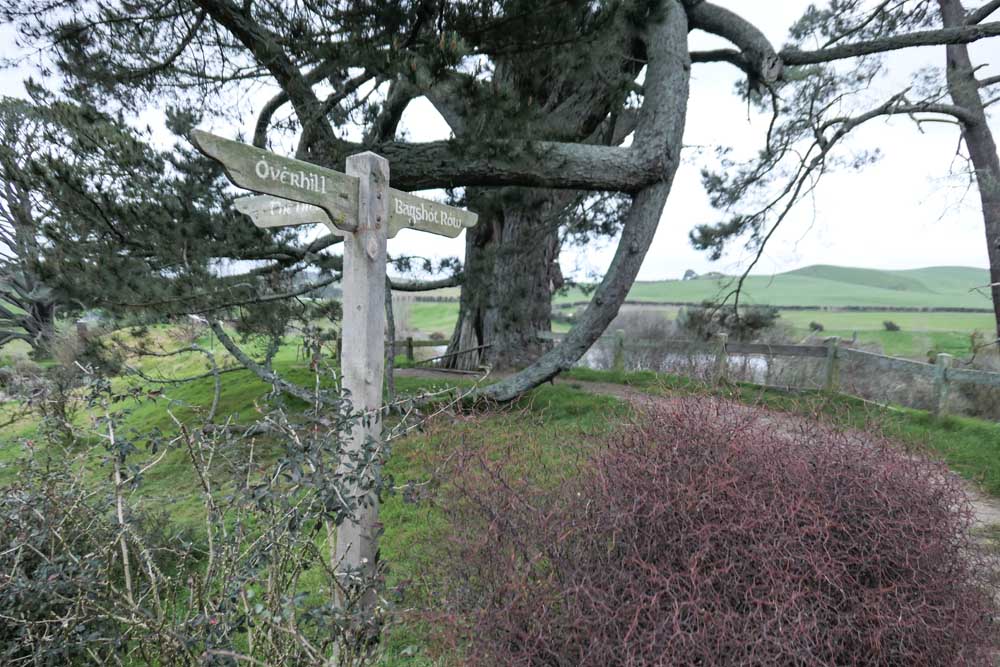 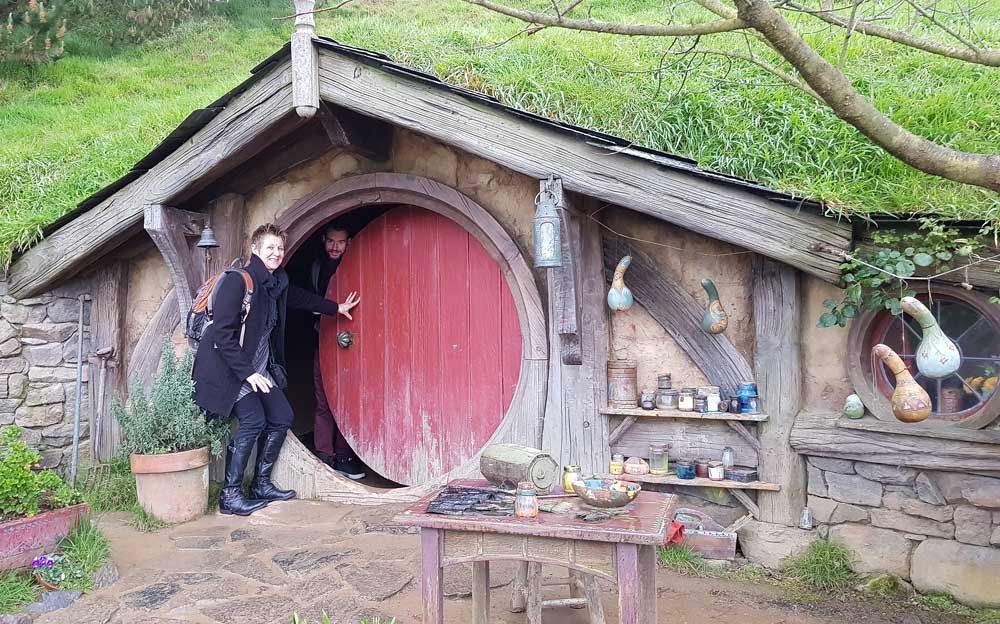 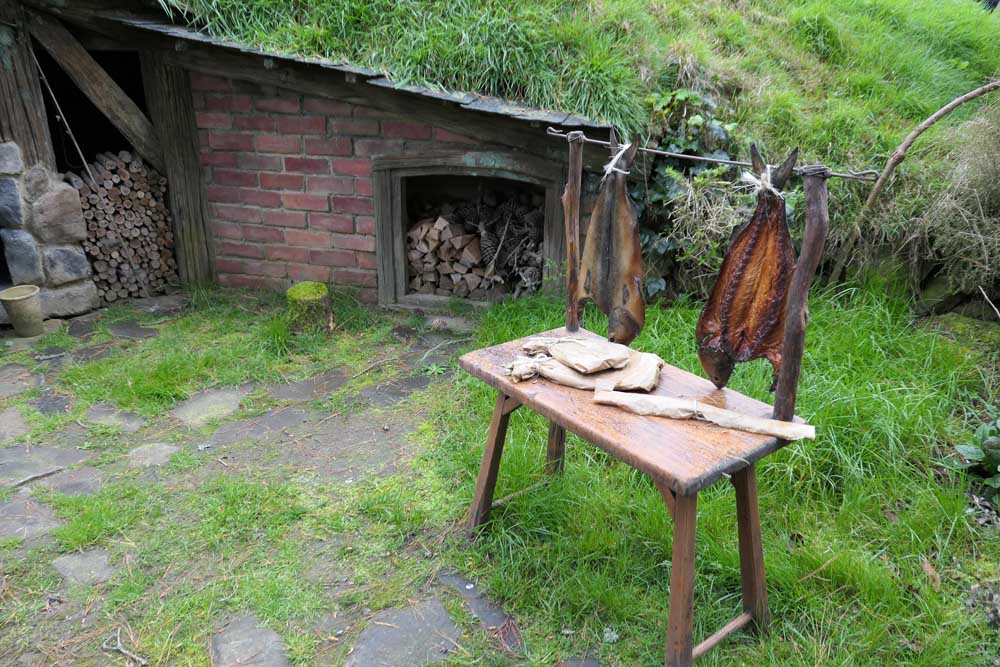 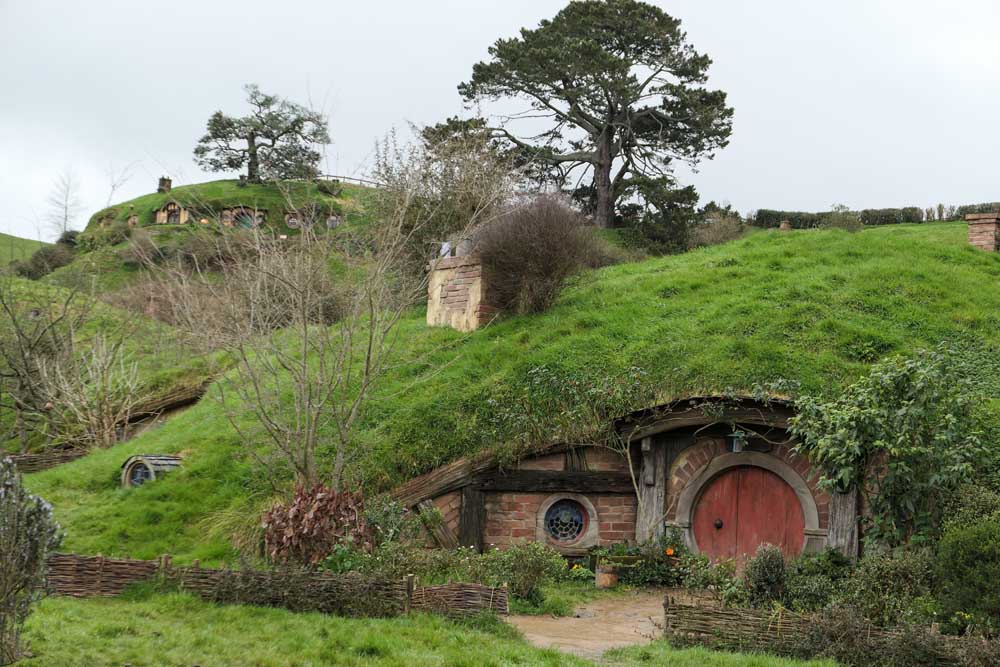 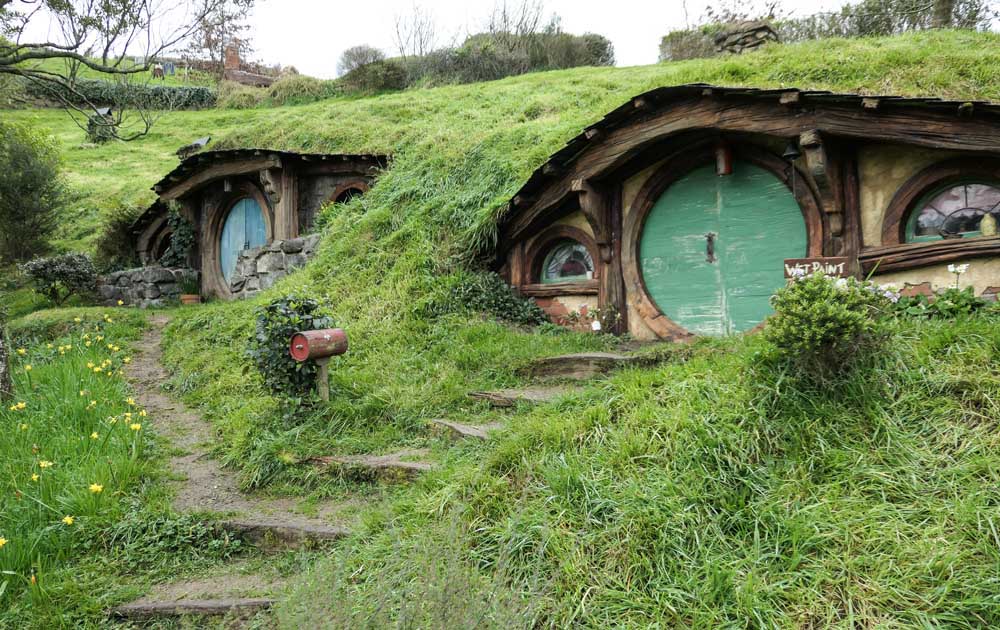 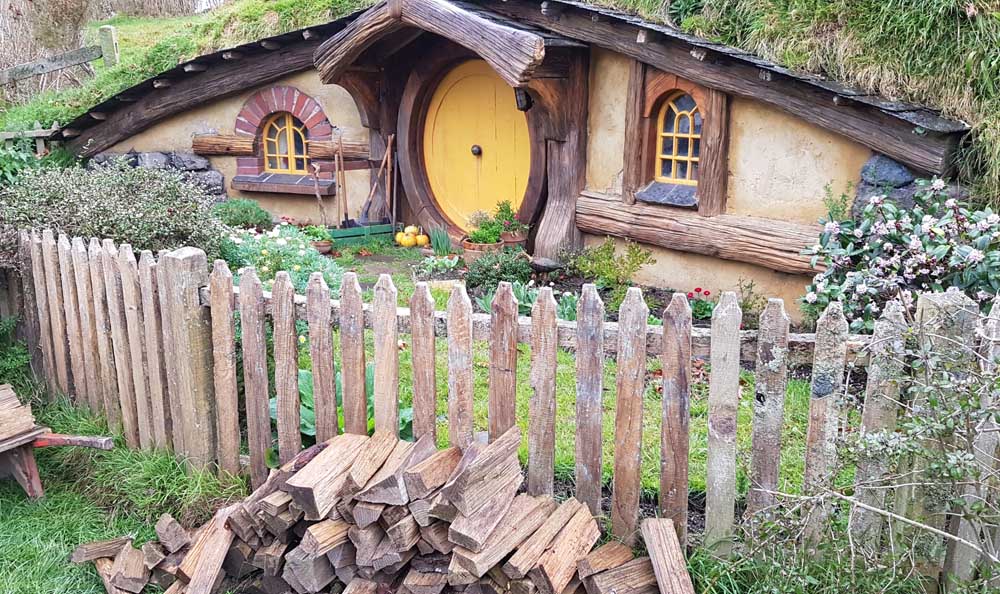 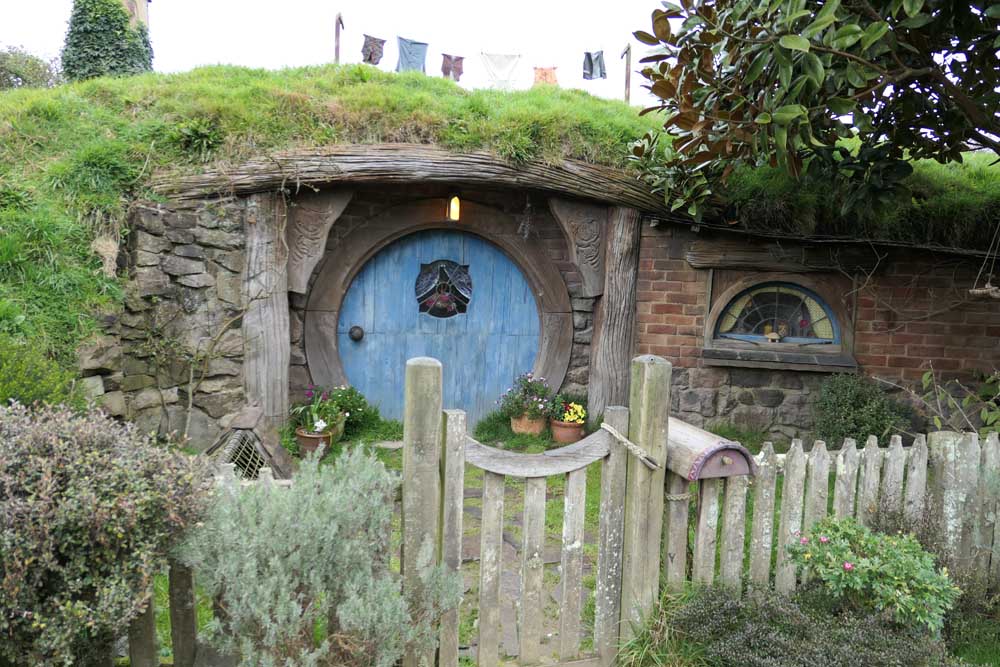 Our Guides were amazing

A great tour leader can really make all the difference. These must be hand picked because they manage to build the excitement and keep it bubbling. The stories, perhaps told hundreds of times seemed fresh, and there were plenty of laughs along the way. This is New Zealand after all, they never take themselves too seriously. 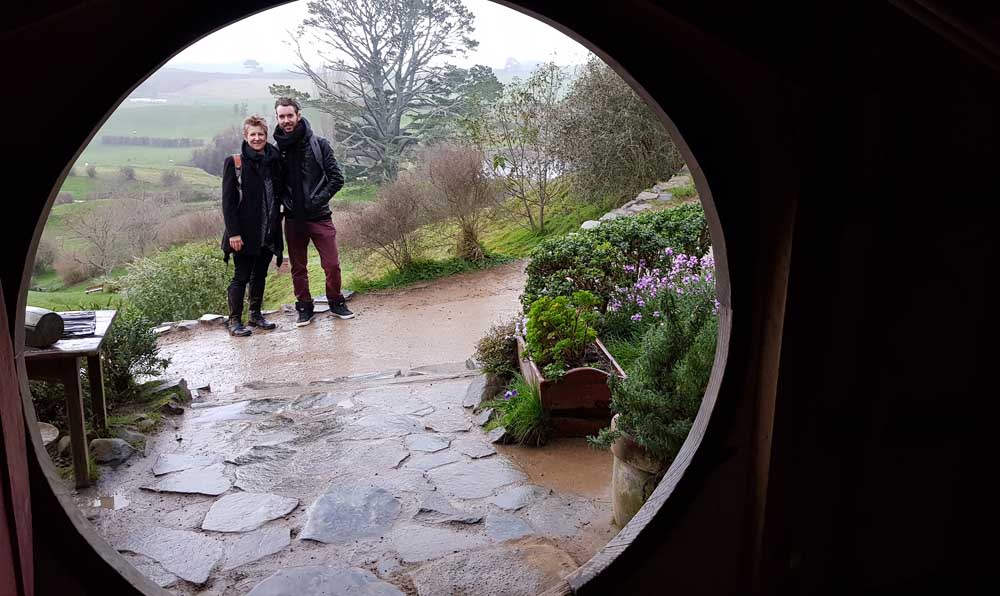 At dusk we cross the little bridge to The Green Dragon where drinks are served in ceramic cups. The Inn is rustic it’s all chunky wood and low lights. Velvet curtains are closed tight at one end of the room and after our drink we are encouraged to gather in front of them. One of the guides peaks behind and then announces dinner is served. He gets volunteers to open the curtains and when they part there is an extraordinary sight. The curtain opening is part of the video introduction to the tour found on the Hobbiton website. See it  here.

Behind the curtains is a room with a large open fireplace and in front of the fire large leather armchairs, closer to the bar are chunky tables and chairs. The bar is stocked with ceramic plates and cups hanging from the servery and homely Hobbit signs welcoming all that eat and drink. These however a momentarily a distraction because further into the room dinner is set out on three large tables seating around 12 people each and these draw everyone’s attention.  There’s almost an audible intake of air as we walk up to the tables literally gowning with food. 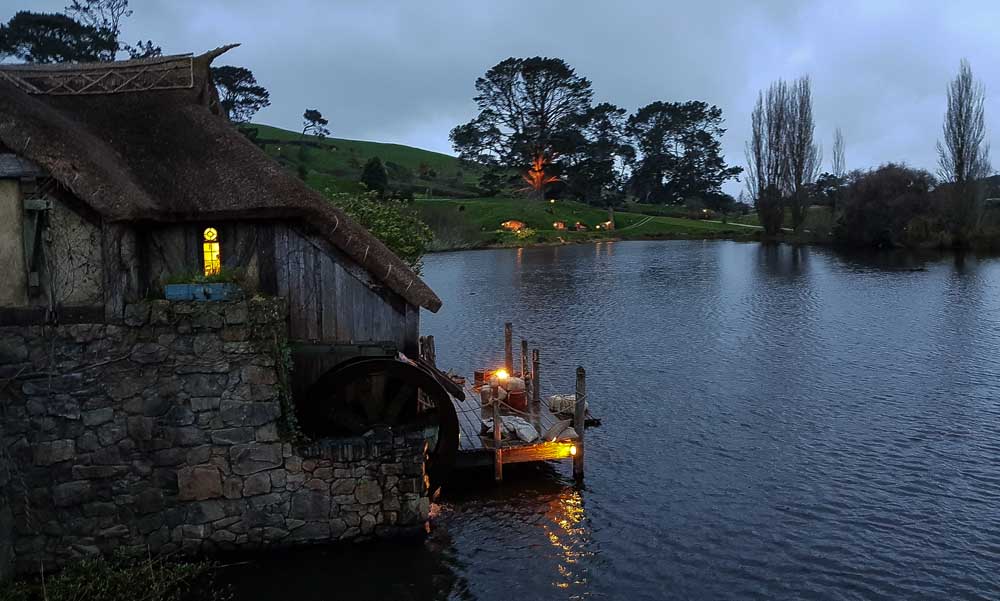 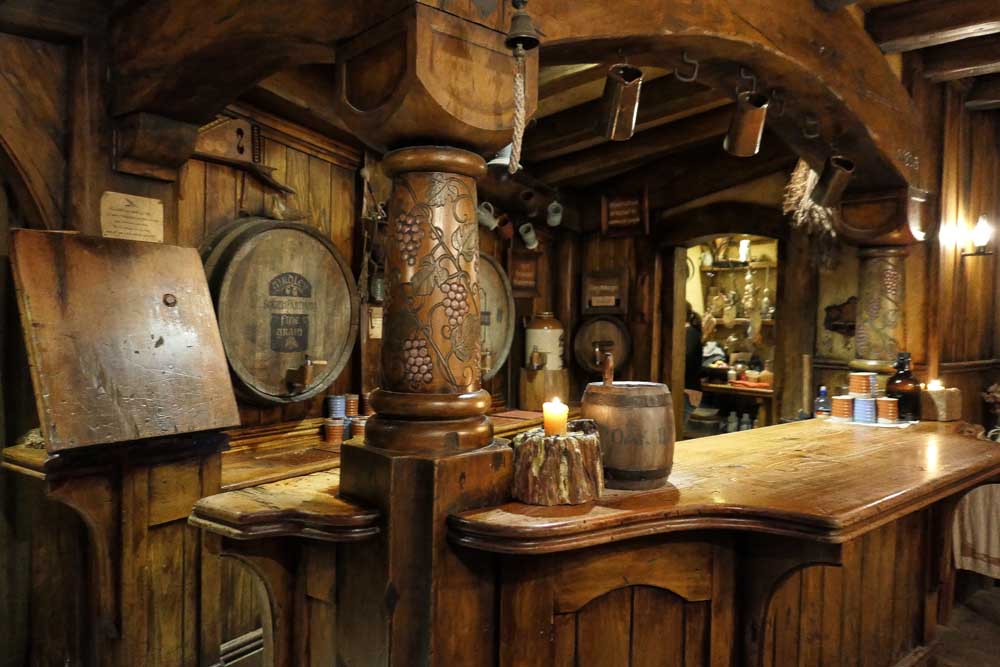 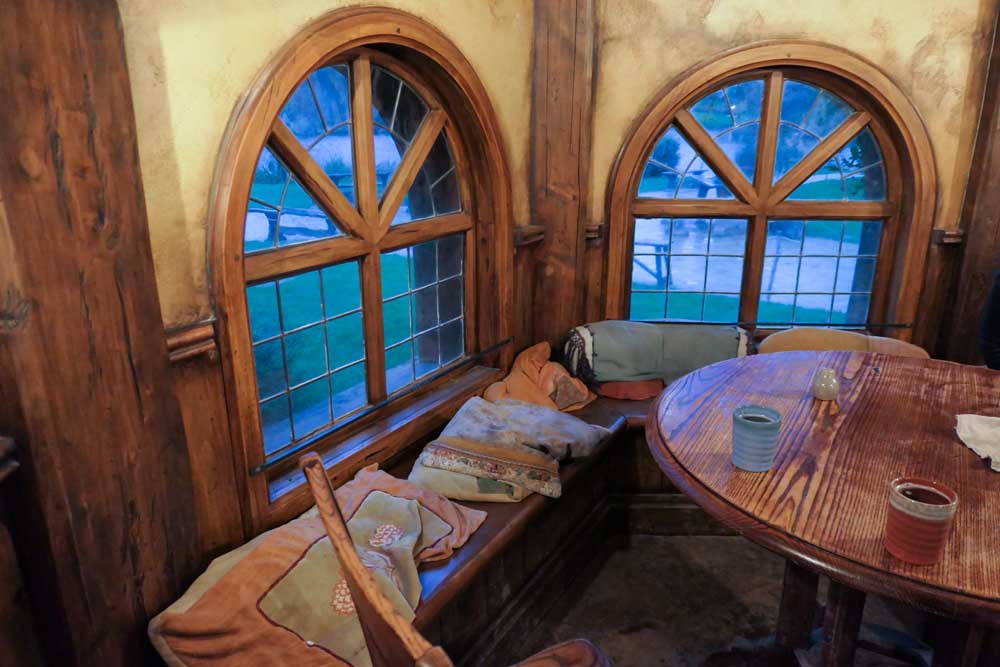 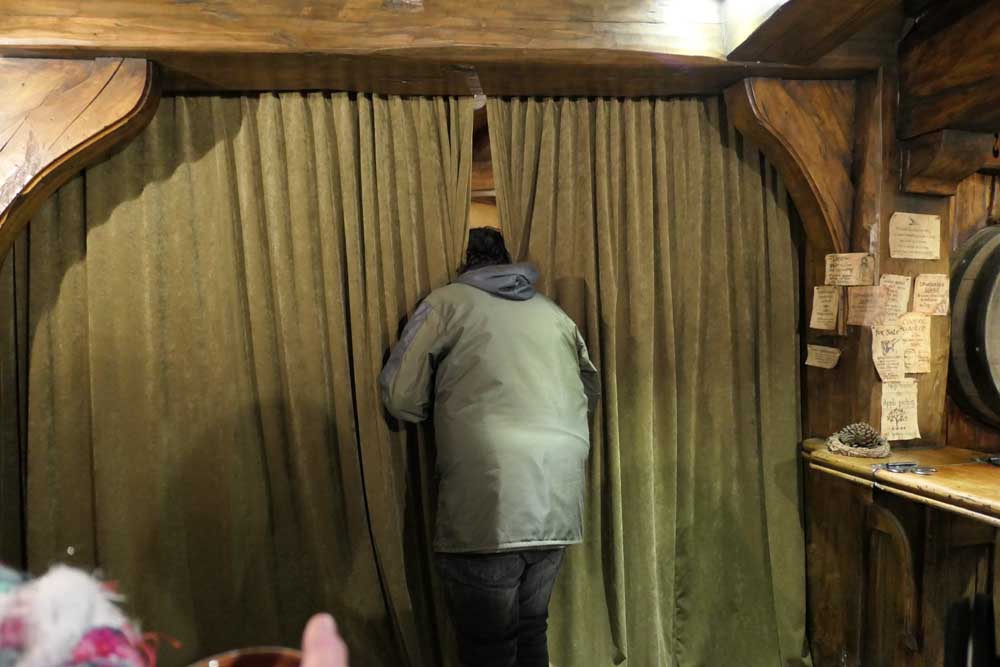 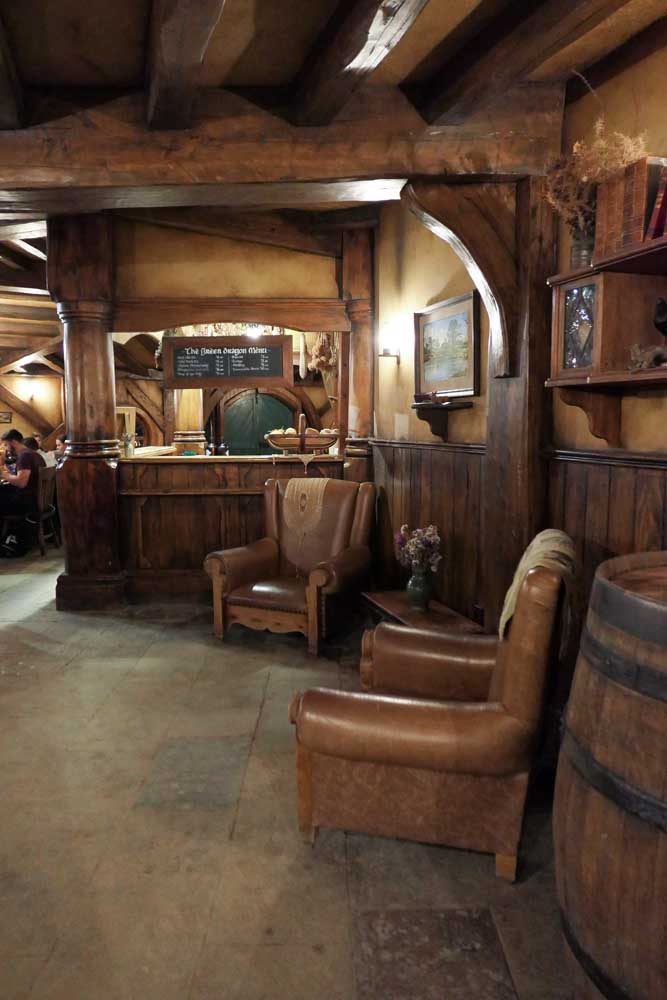 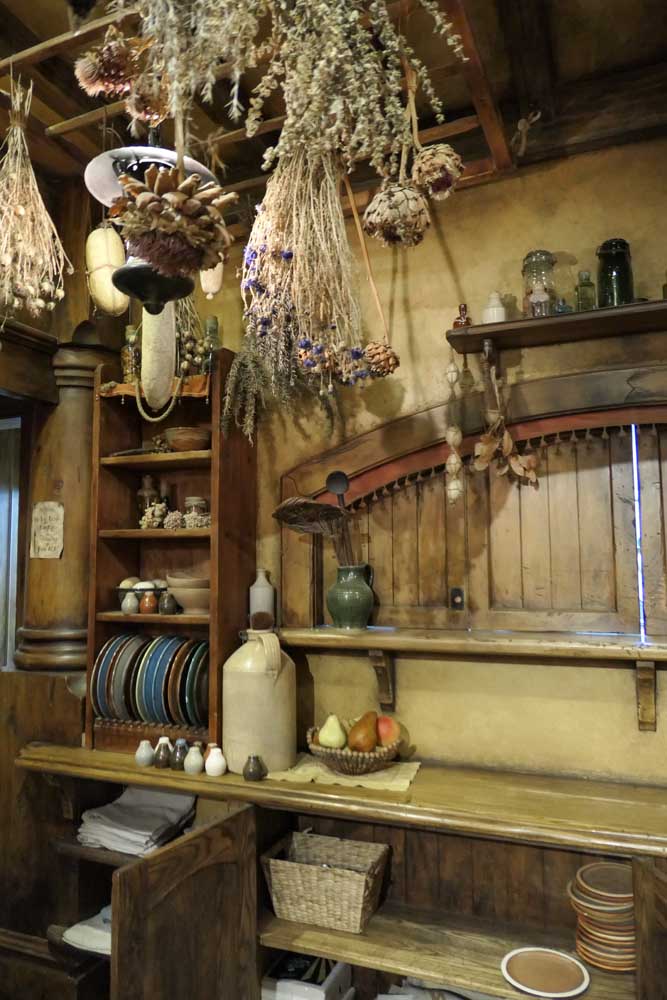 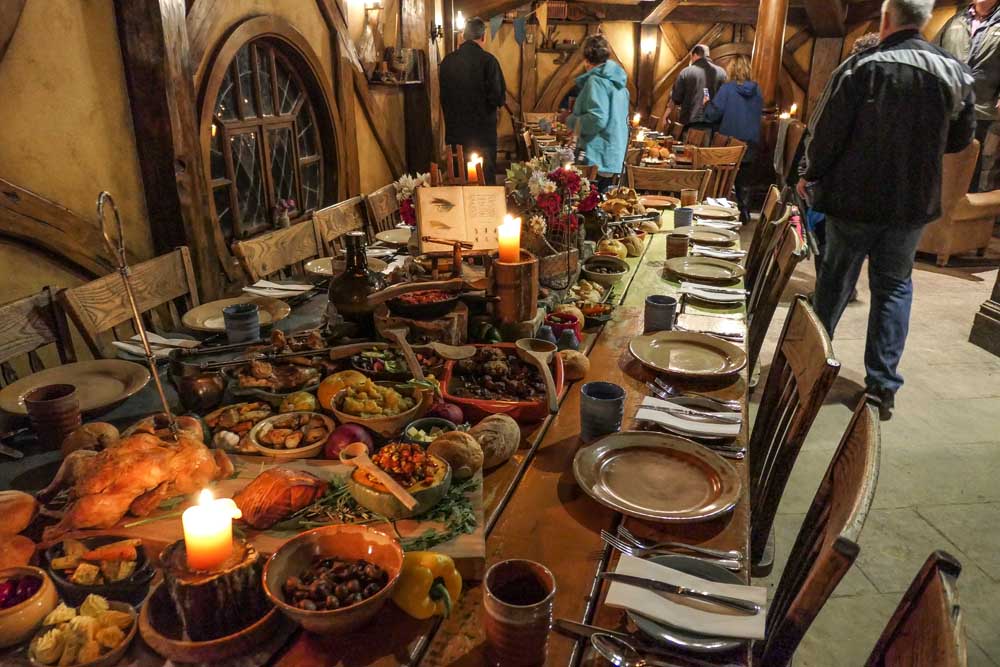 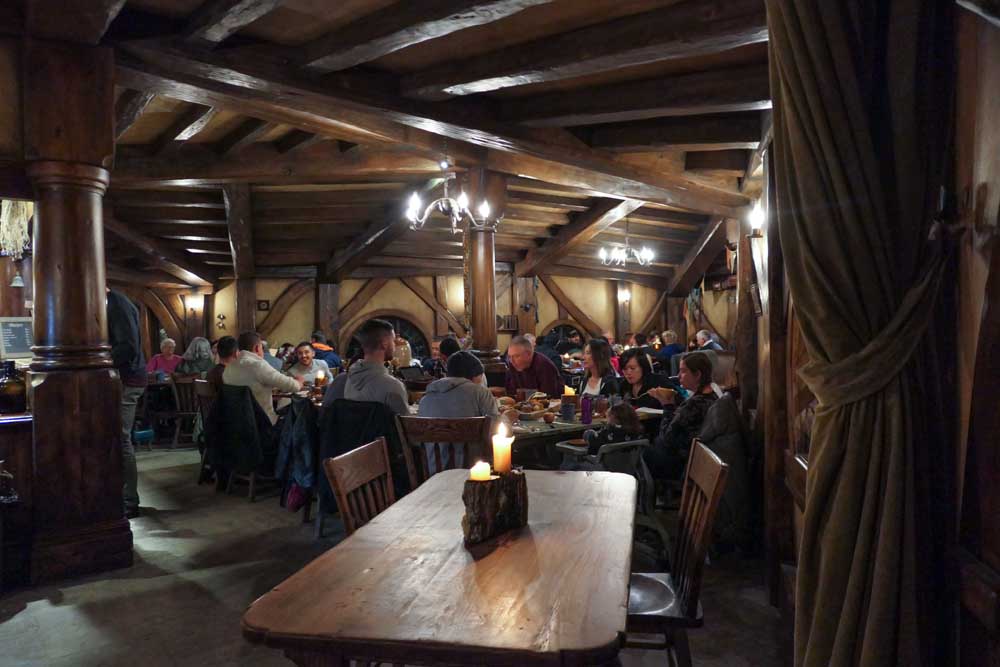 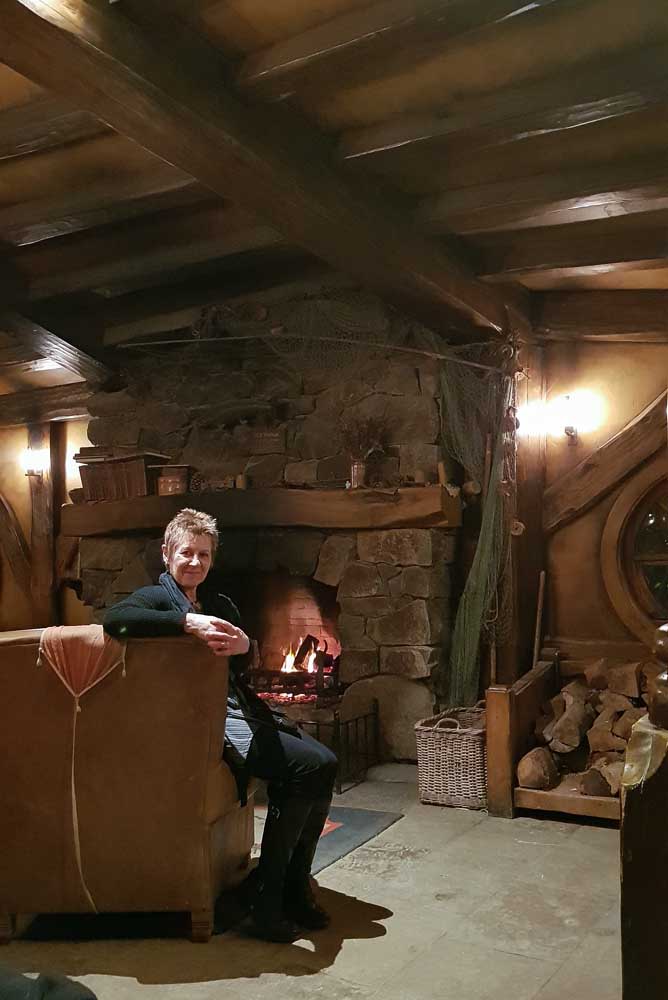 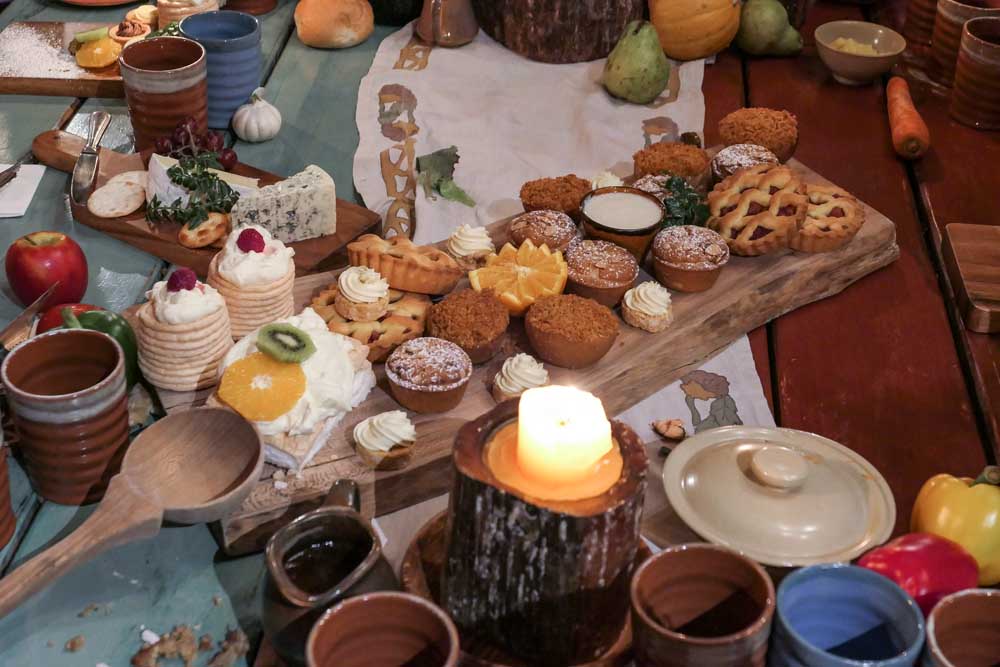 During dinner there are more stories and everyone is encouraged to eat as much as they can, just like Hobbit’s do. Sunny, our guide affectionately dubs this “The all you can eat Tour”. And he is correct, the food is abundant, still steaming and perfectly cooked. Roasted chickens are skewered with oversized forks and there are trays brimming with tender roasted Lamb shanks. Cumberland sausages are coiled in cast iron dishes with tasty tomato sauce and slices of golden roasted salmon sit on boards. We are advised to make sure we eat our greens, but that is certainly not on the priority list for tonight and most probably isn’t any other night either judging by the small bowl of salad leaves placed in the middle. The platters of roasted carrots, potatoes and parsnips take my heart along with roast cheesy cauliflower, stuffed pumpkin and a bowl piled high with root vegetable mash. Bowls of warm whole cooked button mushrooms and zucchinis ratatouille style are also on my list.  There is no shortage of food bar the Cumberland sausages and roasted potatoes that seem to disappear very fast. Still there certainly is no complaining from anyone. When they come to clear the tables there is still a lot of food to be eaten.

Dessert must surely follow dinner and once tables are cleared platters of dessert and cheeses are laid in front of us and we are encouraged again to eat as much as we can. This platter includes Strawberry tarts, Mini Cheesecake Pavlovas, roasted apple with crumble tops and shortbread as well as Bakewell Tarts. This is one of my all time favourite desserts and one of the first I was ever taught to make at culinary school. I am not even embarrassed to tell you between the two of us we ate 4 of those each. A must dessert….I’m dreaming of them now. The bar is open and you can buy yourself drinks after the first complimentary one. Tea and coffee is served but I am in NZ so wine it is and for only $7 a glass it’s a bargain. 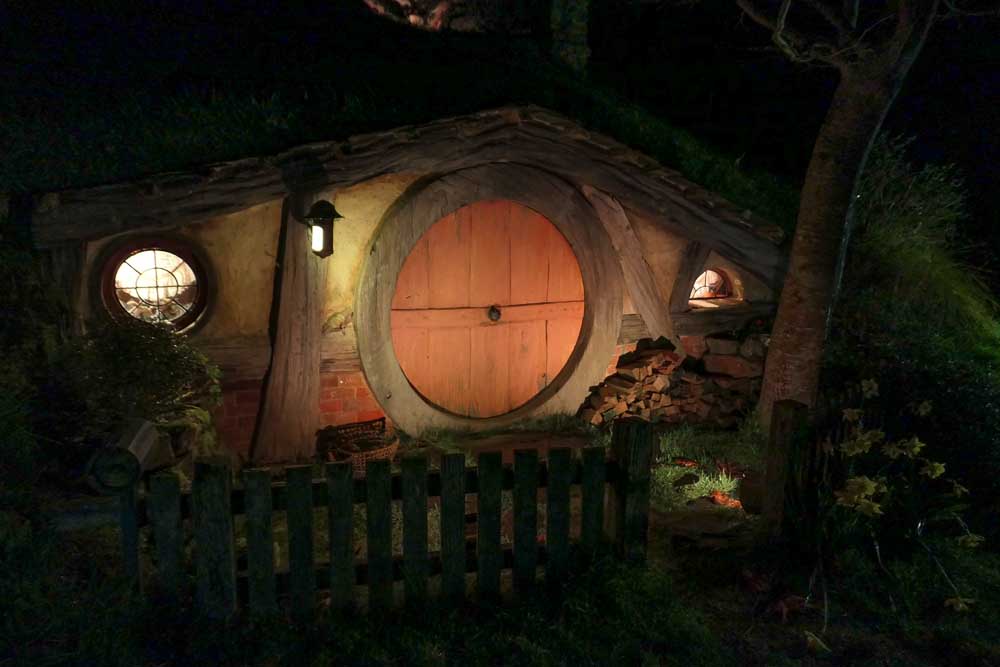 The Party is nearly over

Once the dinner is cleared we are all given a lantern for our walk around the village. It’s chilly but the rain has stopped and everyone is jolly and needing a walk to digest dinner. We are also accompanied by Pickles the (very fat) cat, who lives in the Hobbiton village. It’s surreal walking through the dewy grass past the Hobbit Houses, where the lights glow from the little windows and smoke billows from the chimney’s. There are a few small lantern like street lights here and there, but for the most part light is from the houses themselves and our lanterns. The walk is punctuated with tales and the occasional rustling of leaves and bushes when Pickles takes a shortcut through the hedge. The huge Party tree on the village green is lit up and glowing in the darkness and reflects on the Lake in the centre of the village.

“The tree is the centre piece of the Party Field in Hobbiton. During festivals, Hobbits from all over the Shire gather at the Party Tree and set up feasting tables, special games and activities to enjoy during the celebrations.”

The last of the tour fun begins on the green under The Party Tree. 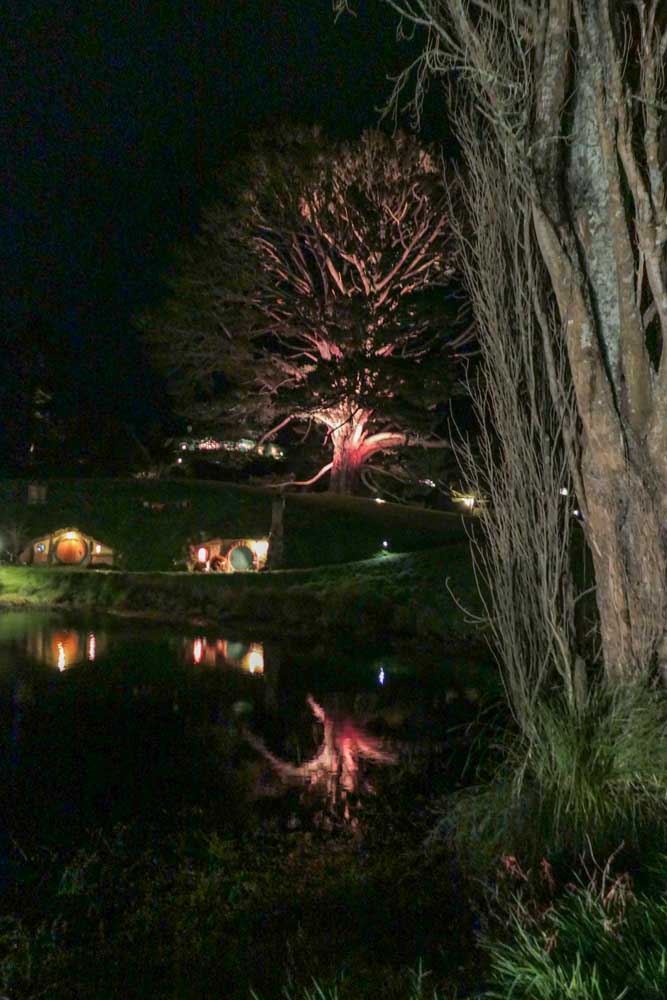 When we reach the Party Field we are instructed to make a huge circle and put our lanterns on the ground. Then our guides begin to sing a version of a Hobbit tune with a little percussion thrown in. They dance around and clap and ask everyone to join in and jig around like the full fat (not so drunken) Hobbits we have become. It’s so much fun and pretty much everyone gets in the mood.

Energised, we head back along the village paths to the bus, having a last photo taken along the way. Lights have been set up just for this purpose and those clever guides know how to work every phone and camera. It’s a very caring and thoughtful gesture. We climb back onto the bus, as Pickles sits beside the wooden entrance gate and watches us all leave. 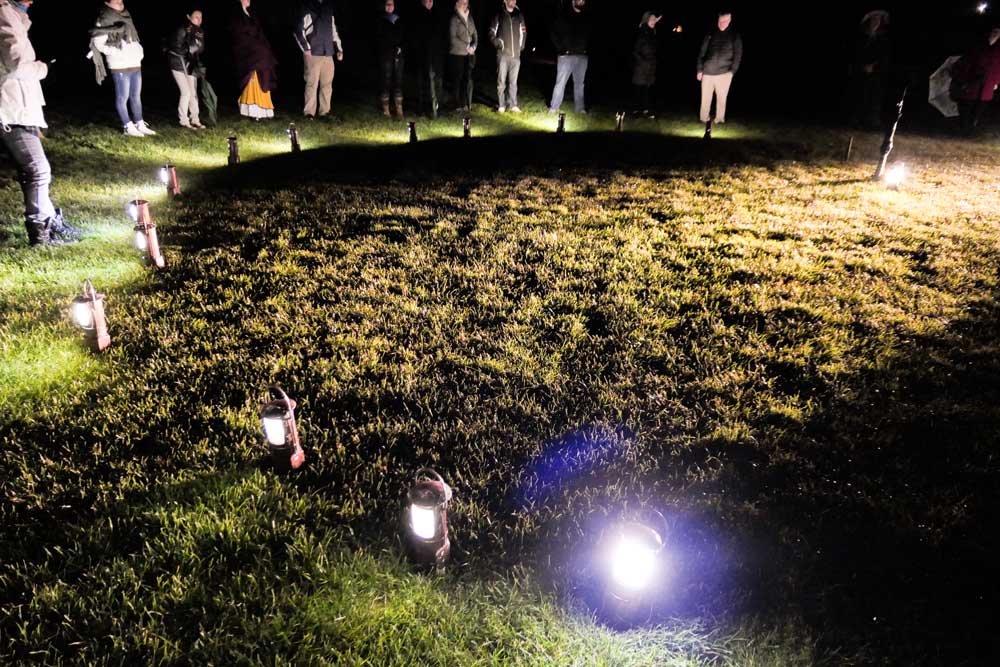 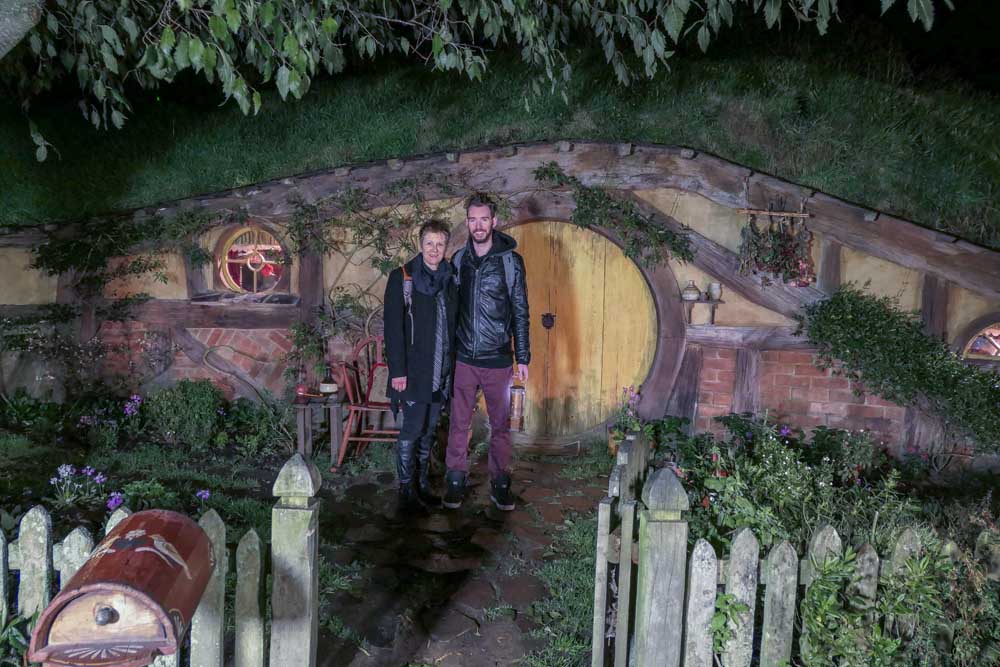 The trip back to the farm gate is cosy and very dark and there are no street lights to pierce the blackness outside the bus windows. People are chatting excitedly but there is just enough time for a last Hobbit film and cheeky chatter from the tour guides. The short film is a farewell with snippets of some of the sights we have just seen. Once we pull up all of the tour guides stand at the front of the bus to say goodbye. It feels as if we have become old friends or that we have been ushered into a special secretive world and here, in a bus on a dark night, we are sad to say goodbye. I feel like this could only happen in New Zealand.

We are fare-welled by Mike who sings his rendition of I See Fire, the song commissioned from Ed Sheeran for the Hobbit films. Funny with hidden talents these Tour guides. 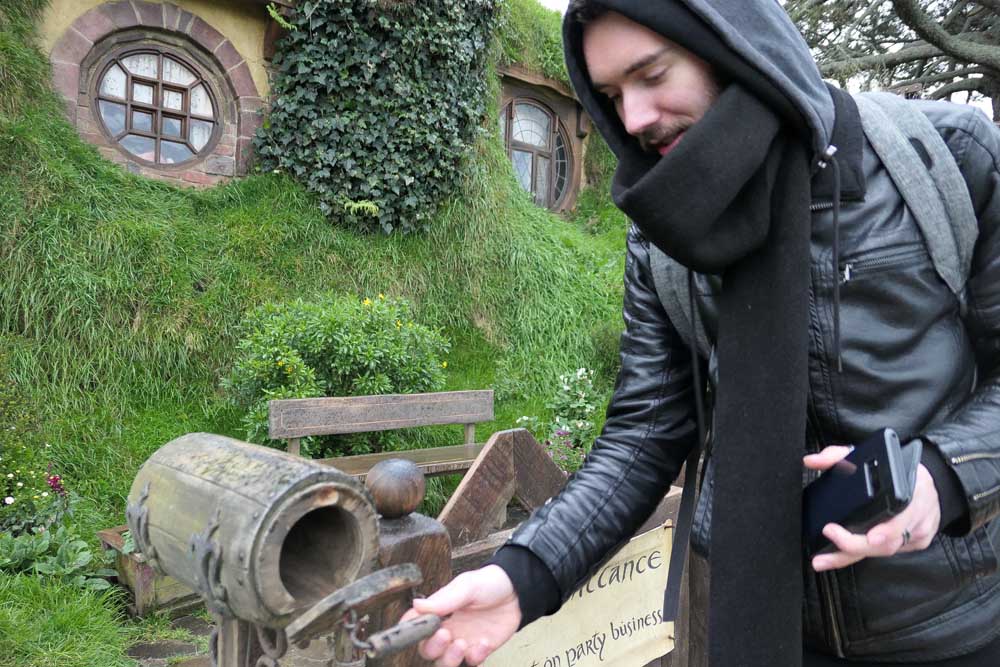 What a great party Visiting Hobbiton is.

My Kitchen Stories and Co visited Hobbiton in August. It was a cold with on and off again rain the day we visited but we were supplied umbrellas and the tour went ahead.

This trip was independently paid for.

It is not the cheapest tour but it was well worth the price paid.

Advice: Do this tour.

Also see Visiting Queenstowm New Zealand. Click the link or on the picture to get the story.