Holland is a surprising country.

I know it isn’t on the list of the most romantic places or a place you might sit on the beach all day, but even if you take Amsterdam out of the picture…..it’s a pretty interesting country to visit. Those Duchies have a great sense of humour and very open outlook on life. Recognition of same sex domestic partnerships has been recognised since 1998 and same sex marriage has been legal since 2001!  I’ve visited many times and even spent 8 months working in Amsterdam years ago. I also worked in a small town an hour from Rotterdam called Zierikzee in the historic province of Zeeland. There is a lot to see and experience; riding a bike along flat green laneways lined with iconic barns and windmills where cow’s graze peacefully is just as thrilling as a ride through the Vietnamese countryside.

Cow’s and Holland do go hand in hand, it’s part of the image and symbolism of the Dutch ( don’t mention clogs and windmills- ok?). I think you maybe quite surprised to learn that Holland exports more cheese than any other country in the world. Cheese is as much a part of culture here as it is in that other cheese country a bit to the south ( France). In Holland even though there are many types of cheeses made, they specialise in hard and semi hard cheeses for snacking and very successfully for cooking.

When I was asked to do some recipes using Frico Landkass. I was happy to find myself back in the world of Dutch cheeses.  It took me back to shopping trips in Amsterdam to find cheeses to add to the menu. There were always so many. They are so easy to eat and to cook with, nothing tricky, just good tasty milky cheeses for everyday eating.

Frico, the company producing Landkaas has been around since 1898, and still use some of the same recipes making pure natural preservative free cheese.

Landkass literally translated means cheese of the land. This is a Dutch cheese made in the style of a Swiss Emmental cheese, using similar ingredients but maturing much faster. It’s a Cow’s milk cheese, and when made, bacteria are added to aid in the maturation process. The curd is formed into large 5-6 kg rounds and matured for around 4 weeks under conditions that allow the cheese to ripen and internally release gas, (as a result of that added bacteria). The gas produced creates holes within the cheese that gives it that distinctive Swiss cheese appearance. Once mature and ready for sale it is coated in wax. Cheese is a living breathing thing so this stops the cheese breathing and maturing further while helping prevent mould and drying out.

Some of the cheese is sliced into pieces and packaged so you don’t have to buy a whopping big chunk. Frico Landkaas is a distinctive cheese that is quite milky/ creamy, nutty and has a sweet after taste. I like it’s slightly lactic bite that softens into a nice sweet finish and this is what makes it so successful and versatile in cooking. The texture is ideal for sauces and melting of course. Picture a giant Ruben with melted Frico Landkaas.  I’ve come up with a couple of recipes that are pretty popular around headquarters this week. 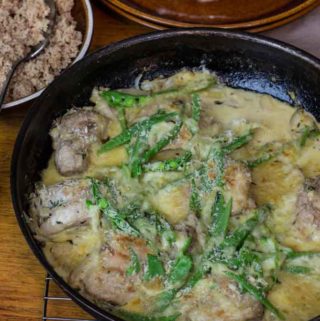 If you only have a small frypan or one that won’t go under a grill, then transfer your cutlets to a grill proof tray.
Cook your cutlets in batches and then lay on the tray and coat with the crumbs before grilling.
Remember that the grill will keep cooking your cutlets so cook only briefly on the crumbed side

Make One Pot Chicken and Cheese casserole too! 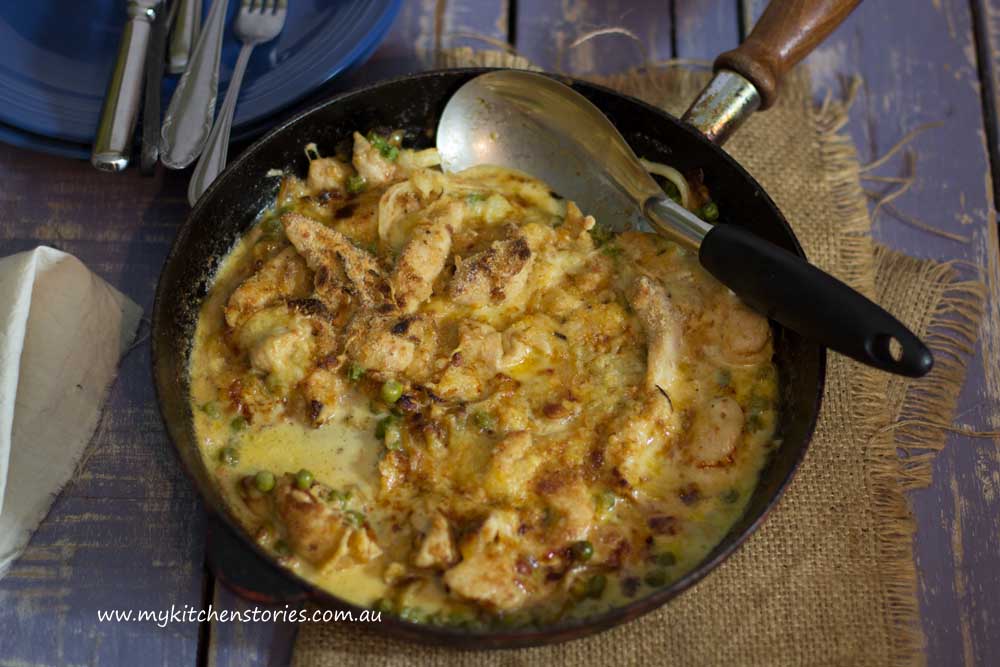 Try these cheesy ideas too

I like it’s delicate, sweet nuttiness and savoury finish for making delicious sandwiches, decadent toasties or impressive cheese and fruit boards. it also gives me some of that feeling you get when you eat something that gives you good memories.

Ideas, opinions and recipes are all my own. My Kitchen Stories.

0 shares
Previous Post: « Prawns Sweet Chilli and Sesame Marinade
Next Post: How to BBQ Salmon with Pickled Ginger and Sesame »