This is a little tale about Hitting the streets of Cambodia. It’s a journey I took a few years ago but the images and memories are just too vivid to forget. 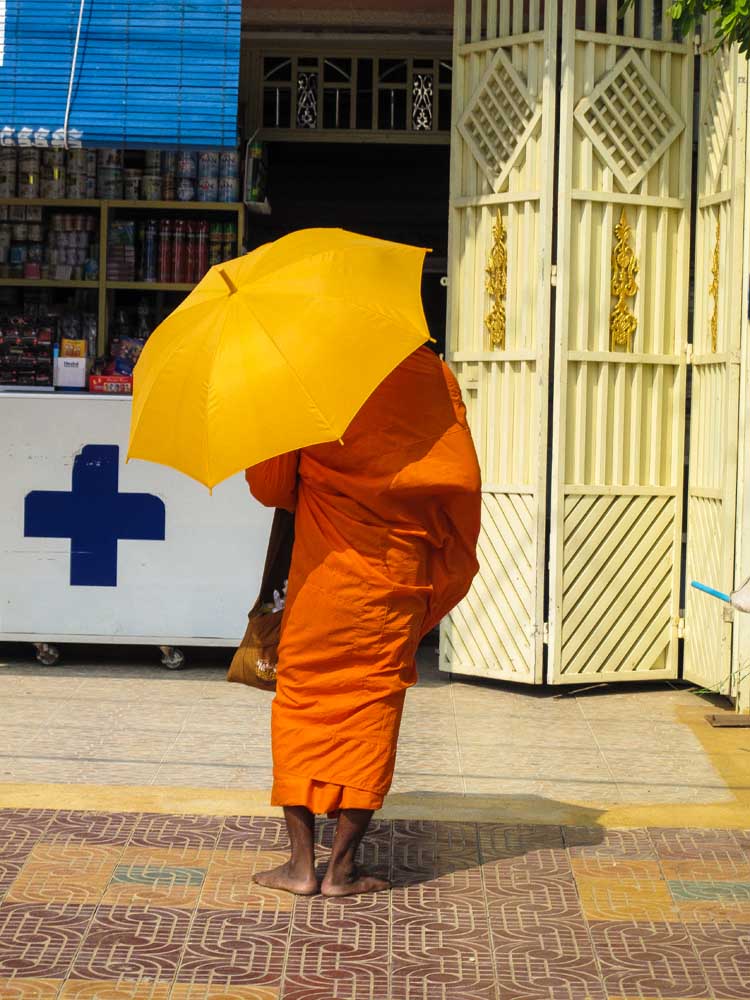 Hitting the streets of Cambodia

It’s also a story I wrote for a publication, so read and see if you get the feel of Cambodia.

The taxi driver met us down on the street as planned. The morning was in full swing, food cooking on roadside stoves, horns blaring and other taxi drivers jostling for attention. Our driver was a good natured fellow and waved them away as he struggled to fit our bags in the boot. Even my eyelids were sweating and it was only 7 am.

We were incredibly excited about seeing Elephants at the end of our journey, but for the time being, we just hoped to reach our destination in one piece. Traffic in the capital Phenom Penh was a snarl of buses, bikes, motor scooters, three wheeler vehicles, cars and four wheel drives. We approached each intersection with slow precise movements, inching forward slowly but surely in a practised untangling of vehicles heading toward an exit.  At times you could be sitting side by side with a family of five on a motor bike, the children eating breakfast or mum feeding the baby. 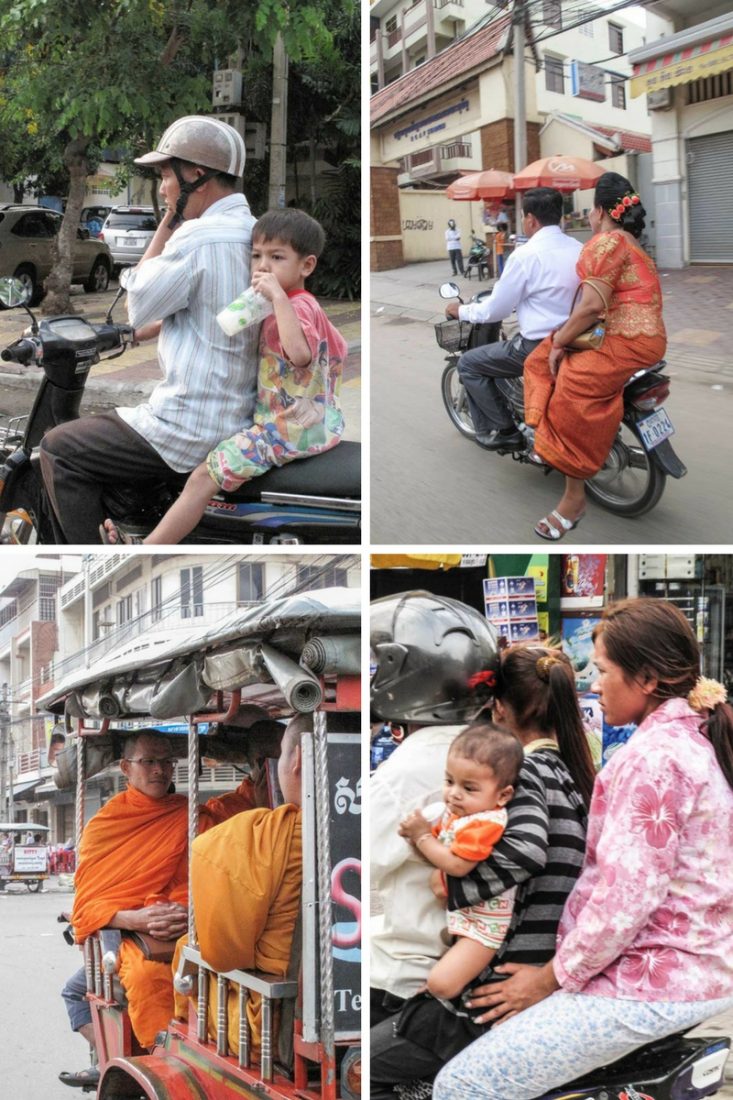 Finally we were out on the open roads. We sped through villages with the windows down and the hot breeze blowing our skin dry. Skinny men on bikes braved the narrow roads with cars and buses. The traffic went speeding through endless settlements with horns blasting in the hope dogs, chickens, children and horse drawn carts would part and let them through. We had given up trying to guess how much longer we would have to play eye spy to take our mind off being passengers in a treacherous fast paced dodgem car. 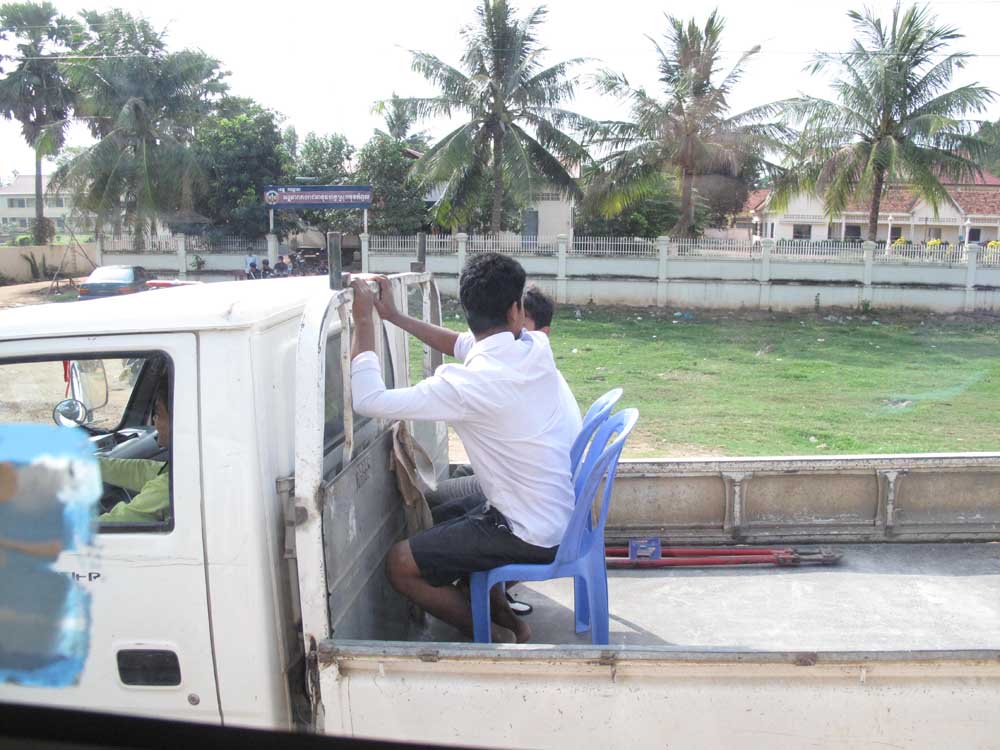 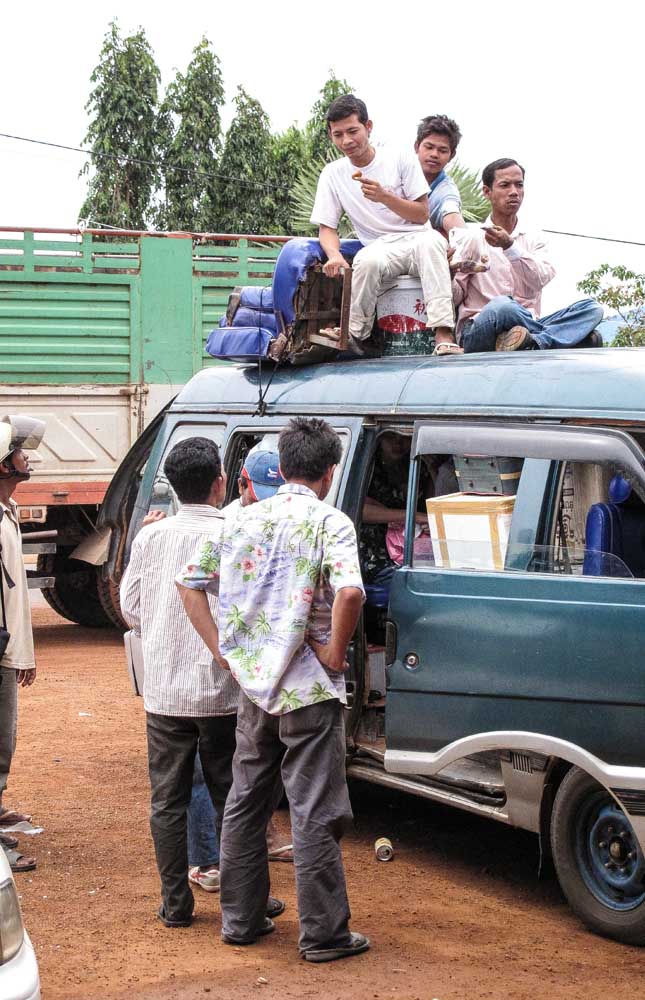 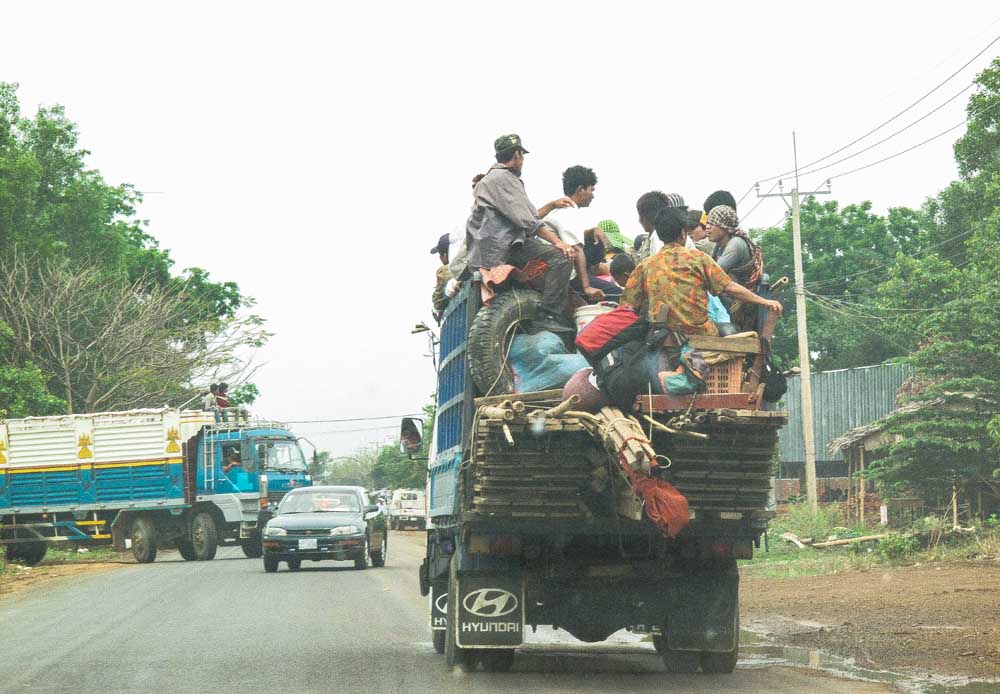 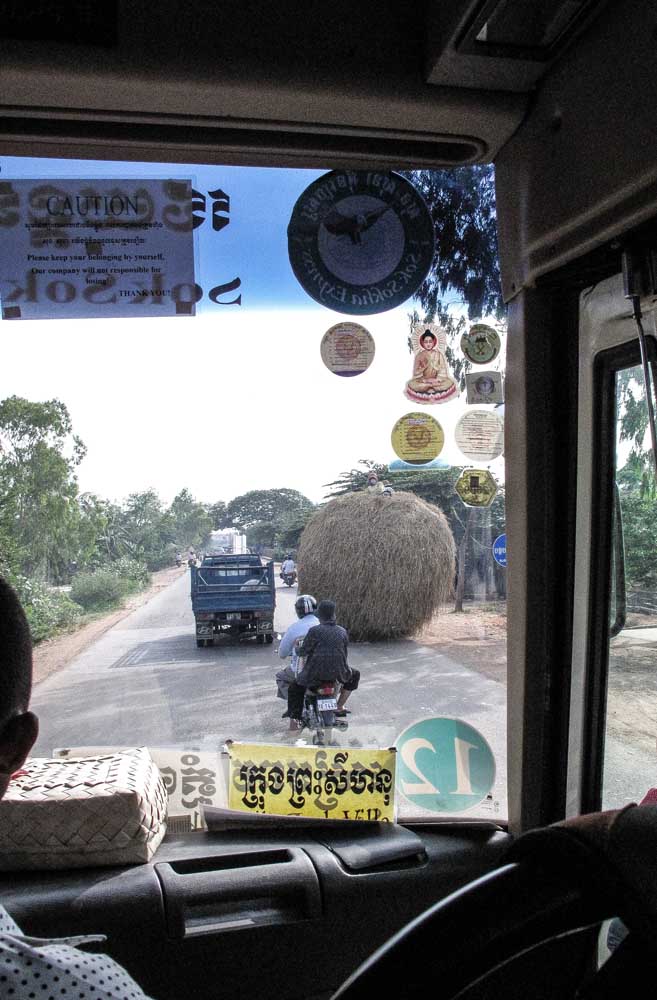 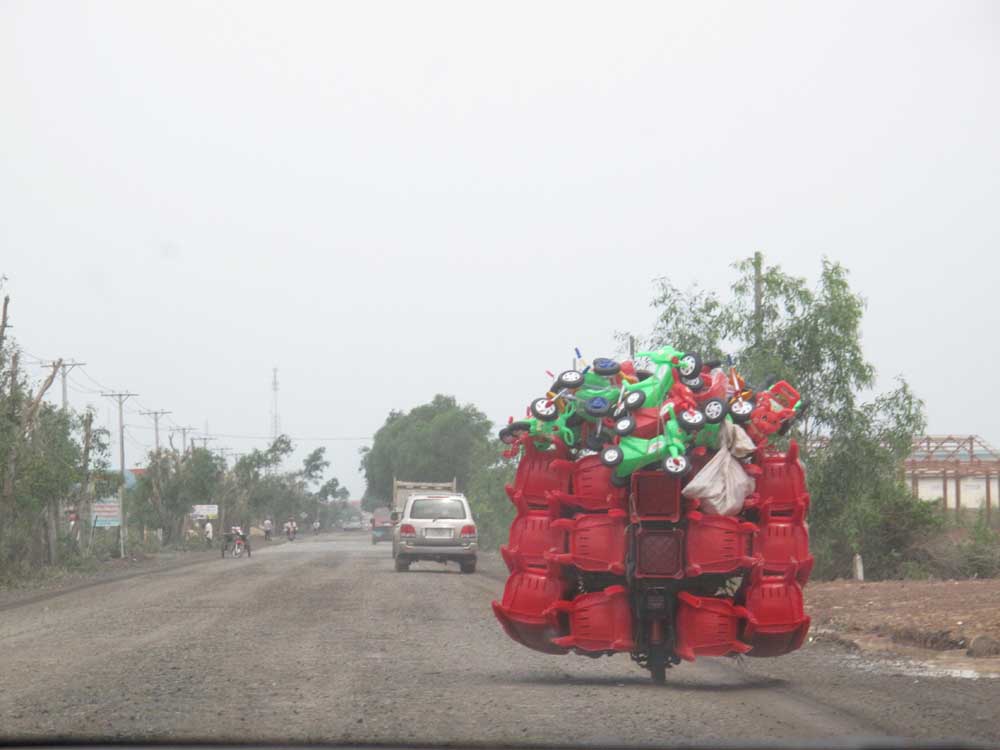 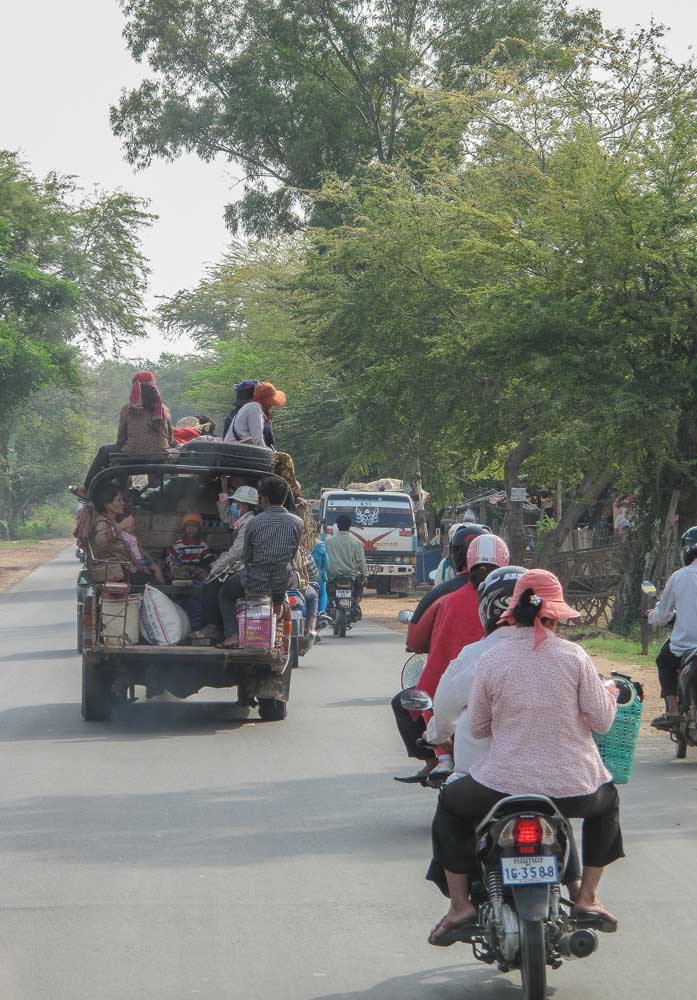 Our driver didn’t seem to have any sign language skills, but I guessed the trip may be around 5 or 6 hours. We didn’t know exactly as the ride was organised by the volunteer organisation we were going to work for. Inevitably, there were a couple of stops.  A roadside café at lunchtime bore all the hallmarks of a typical bus or taxi driver’s stopover. It was barely a lean to on the side of a house in a town dominated by wooden shacks and rubbish. The café was made of corrugated iron and we pulled up right in front, dust rising and setting back on the food lining the counters. A selection of about six aluminium cooking pots sat side by side on an old table. In front of these were platters of fried meats and vegetables. Our driver shuffled in and was given a plate. He took an assortment and sat down at a table. He lit a cigarette and began smoking and eating simultaneously.   Flies were enjoying the meal too, along with the other men that had pulled alongside the building in the sun. The shed was far hotter than the food itself and we waited outside for him to finish his lunch. He ate chicken, throwing the bones on the floor. When he left the table to pay a skinny dog snatched the bones and ran off.  We discovered a new appreciation for dry roasted peanuts and salty crackers from the shop next door and wondered if lemonade had ever tasted this good. 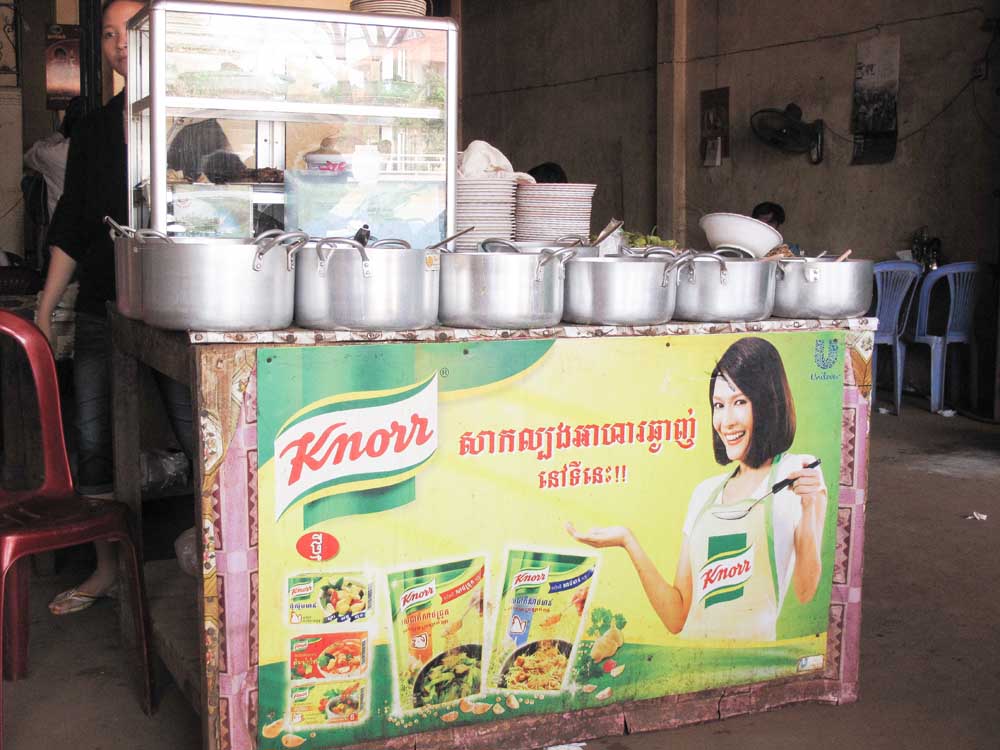 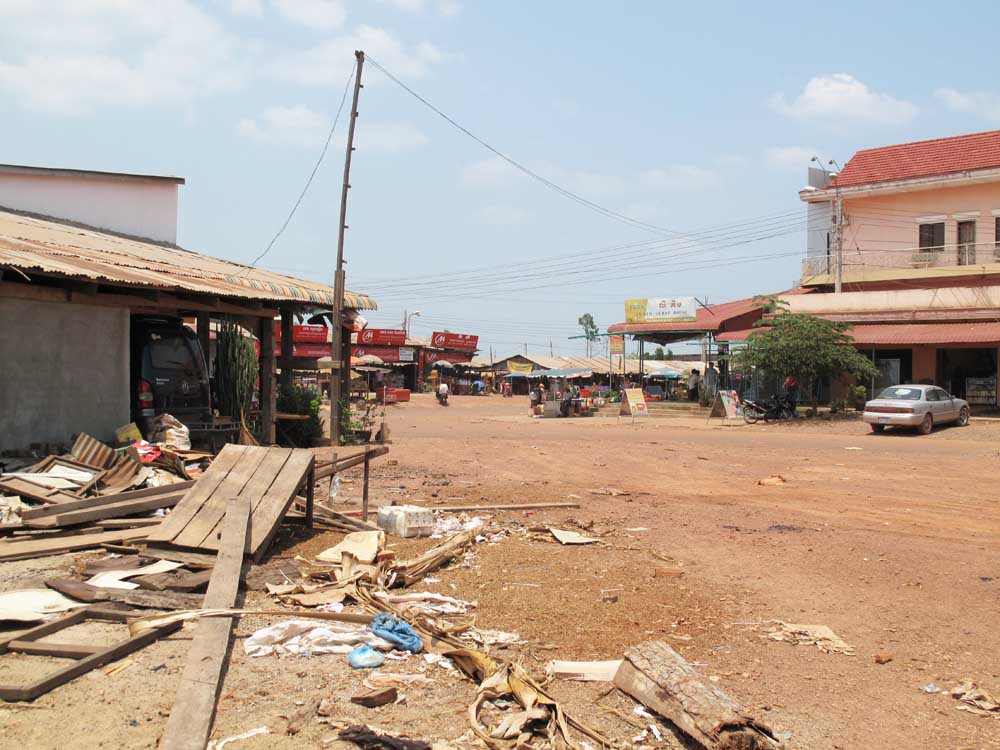 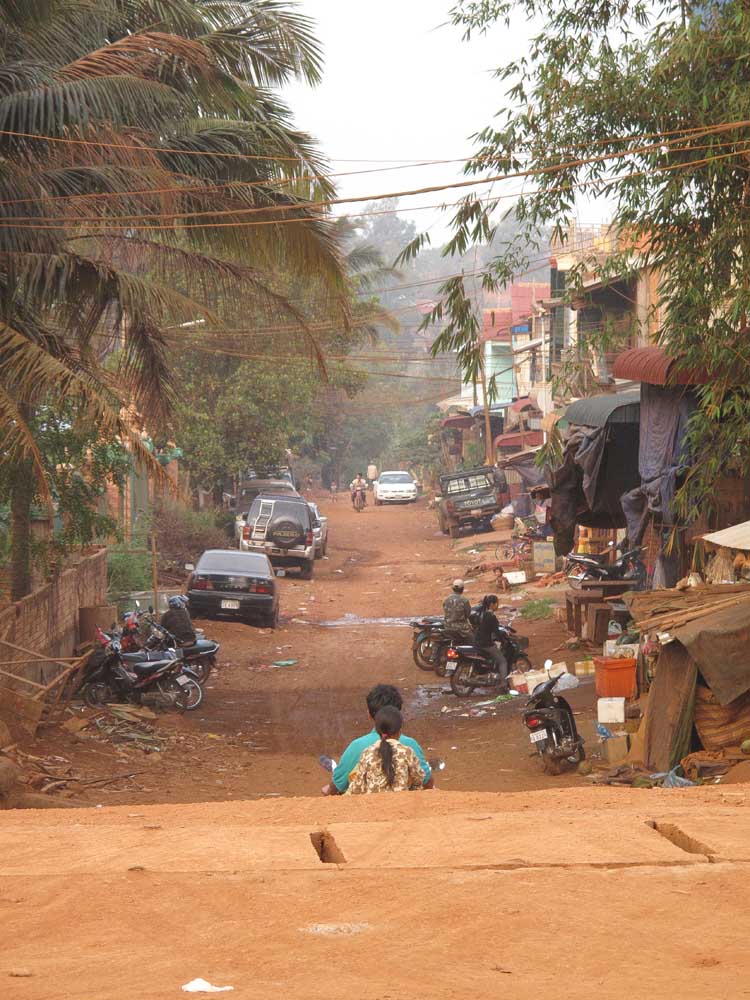 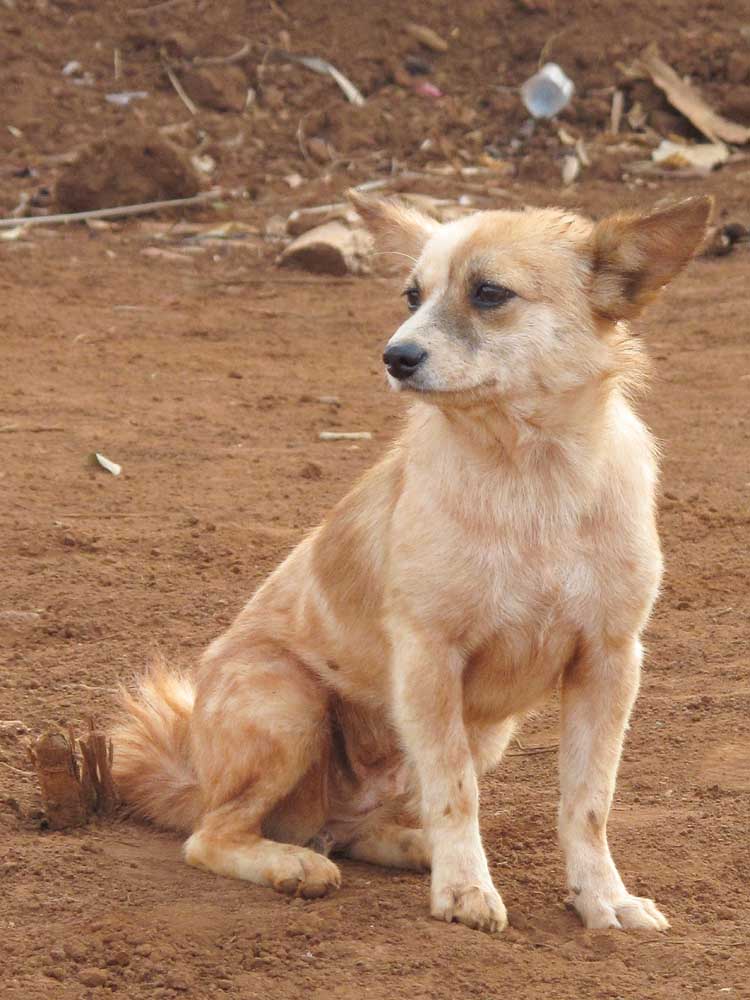 Our next stop a couple of hours later was a congregation of small seller’s grouped around a more permanent structure of shops adjoining unforgettably nose assaulting toilets. Eager vendors dotted all around the bus bays offered cut and packaged fruit and artfully piled fried and dried foods.  We were drawn to one of the black sticky looking baskets near our taxi. The alarmingly mountainous pile of fried tarantulas it contained concerned me on many levels. This snack is a firm favourite for Cambodians. Other stall holders had them slotted onto skewers like an easy to eat horror movie while others scooped them into paper takeaway cones for the road. 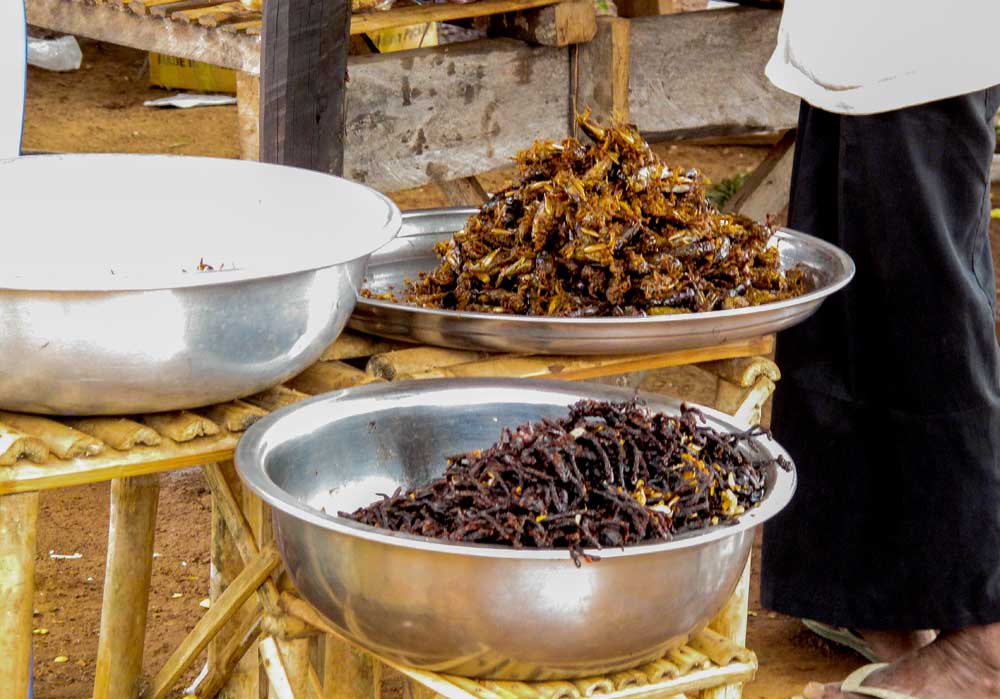 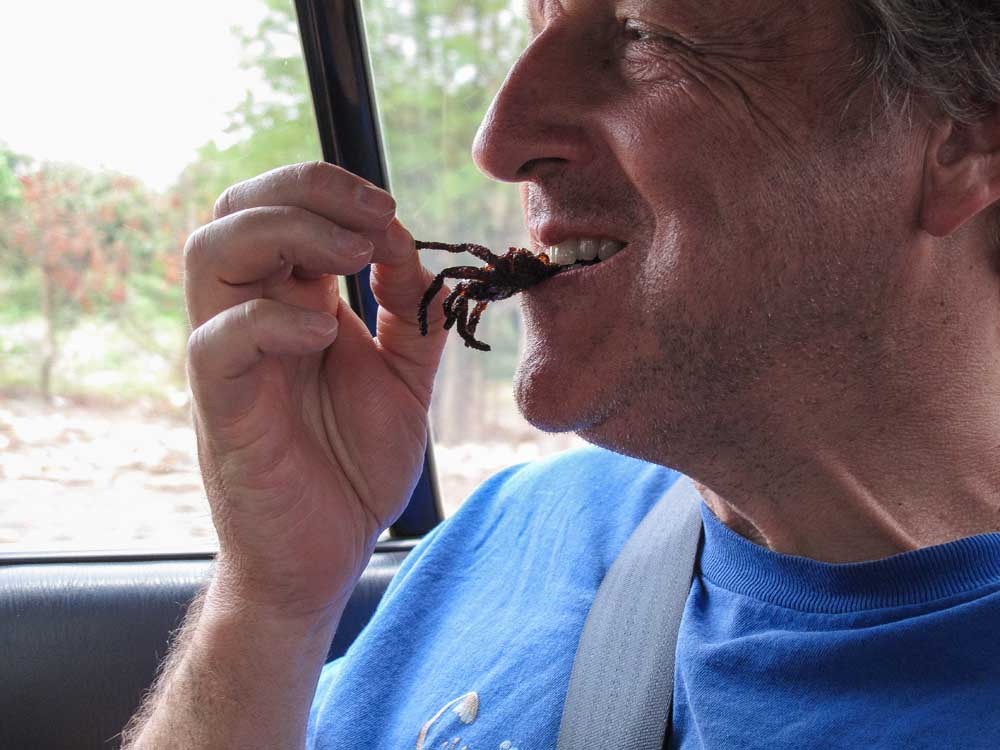 We arrived in Mondulkiri Province on the eastern boarder of central Cambodia 10 hours later. New roads were being cleared and bikes and cars passed raising red dust that made our eyes smart as we got out the taxi. My legs were wobbly, so I stood staring at the sights and sounds of afternoon in a provincial town in Northern Cambodia. The bags were unloaded onto the side of the road and that’s where we waited for the next lift.  Nearby a bike pulled up beside a lady with a tight bun and a wrap that looked like a sarong around her waist, her cart was filled with old coke bottles holding a yellow liquid.  But at the road side she had a rather shmick looking petrol pump attached to a metal drum for larger vehicles. She filled this manually with a plastic bottle filled with fuel. The rider offered her change in exchange for a bottle that he upended into his petrol tank and then road off. 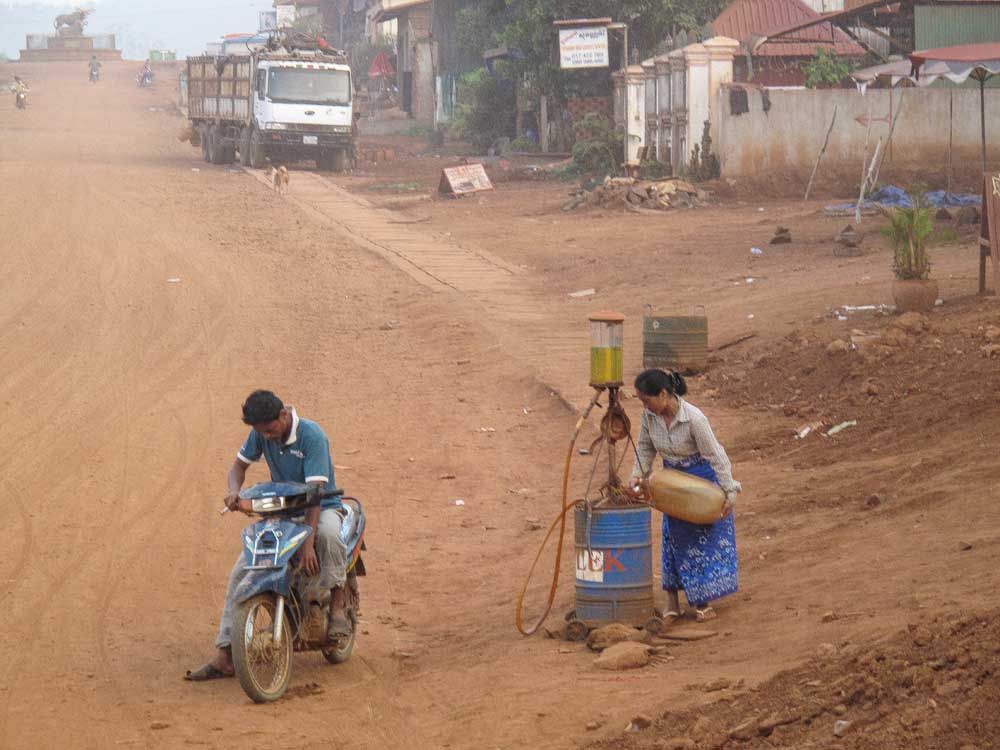 We had arrived in Sen Monorom a town now on the map for the various ways in which you can engage with Elephants and the Cambodian environment, Eco tourism. There are waterfalls and dense jungle walks, where it’s still possible to encounter wild cats and Elephants. It’s the most sparsely populated province in the country despite being the largest in land area. I really couldn’t tell you I have a burning desire to walk in jungles or chase after wild cats but I sure wanted to see some Elephants. Now we were here, I was unconvinced there were Elephants anywhere near this dusty little town. Could it be possible? 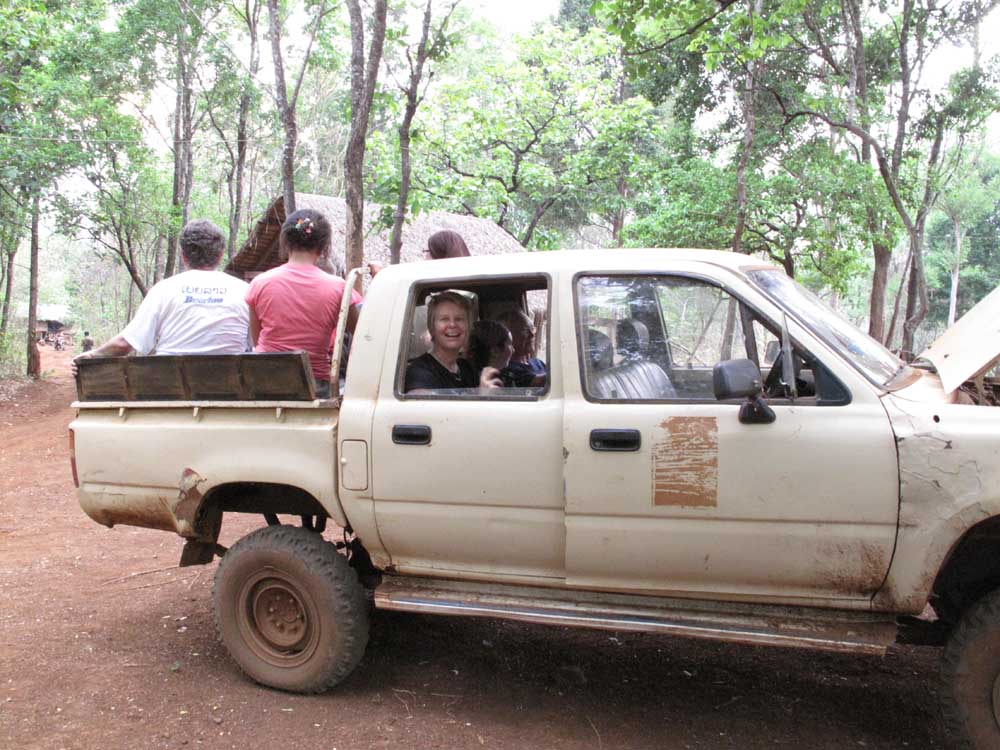 The next part of the journey involved a 30 minute rough ride in a four wheel drive out to a property belonging to The Elephant Valley Project. Elephants here are rescued from long lives of work and are often injured and have endured much cruelty. They have been rescuing Elephants since 2006 and have been allowing them to experience the life of a free Elephant, roaming the jungle protected. They each have a personal Mahout, who even sleeps with them to ensure their lives are now full of the things that Elephants love…. a friend or two, water to splash in and mud and dust to bath in. 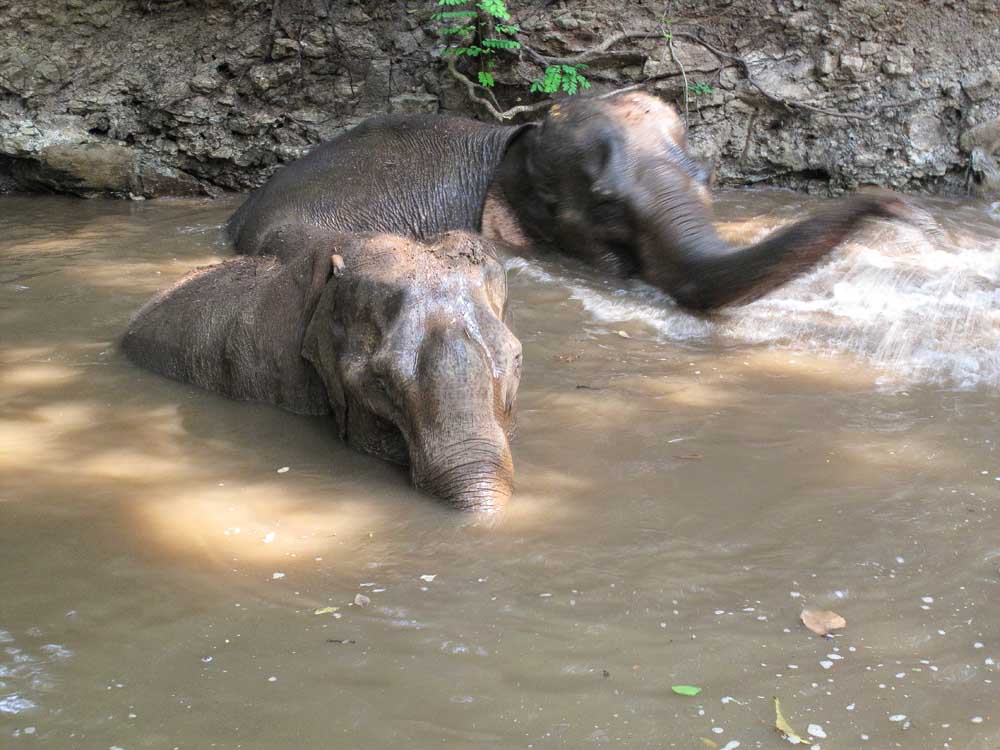 As we drove down the steep rutted road towards the main building we passed small houses some on stilts and saw families sitting on the high steps waving. Some of the tribes in this area still practise a nomadic lifestyle and have inhabited this area for up to 2000 years. They are deeply spiritual and superstitious and are still driven by these old practises performing ritual sacrifices and ceremonies. I am sure we looked at each other with the same questioning minds. Small naked children ran after chickens and squealed as we laughed as we bumped past their house in a battered four wheel drive. They had such beautiful fresh faces. 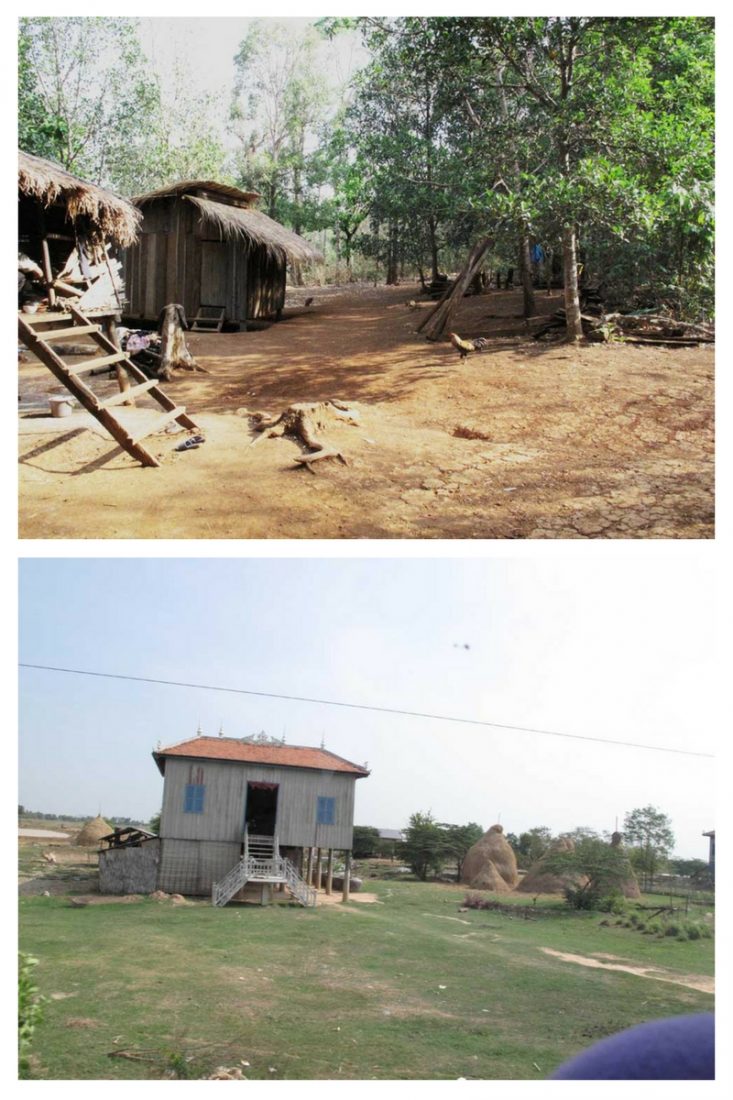 …not only provides sanctuary for the Elephants it also provides work for locals as Mahouts or labourers and cooks as well as jobs helping out with care and support for the Elephants. It provides employment for Mums and Dads and a more stable life for the young Phnong children. Life is simple here. There are few luxuries and even fewer chairs and tables, don’t bother looking for a lounge in one of these wooden grass roofed houses. 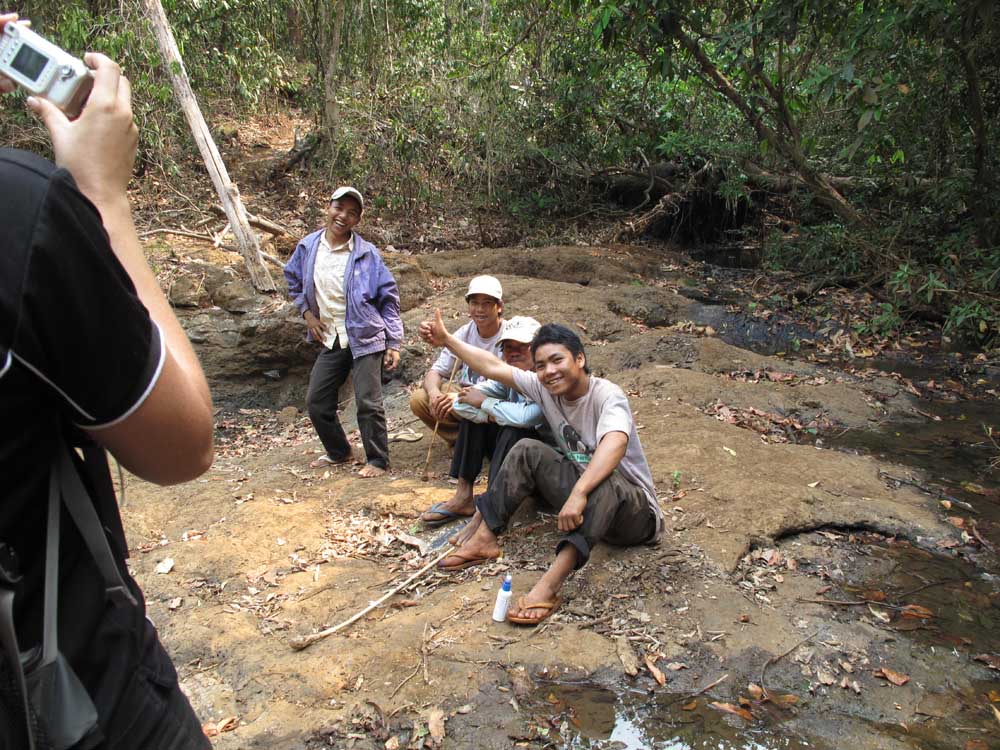 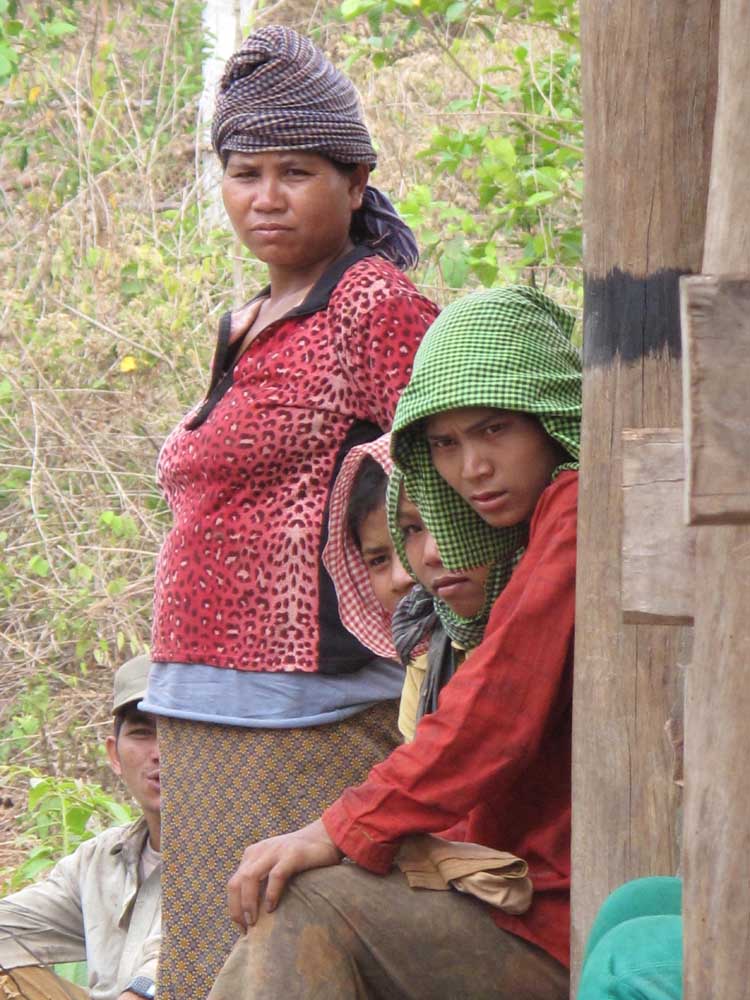 When we pulled up the main building itself was only as large as a small bungalow. It was also a simple wooden structure with a woven roof but at the back it was perched over a slope and once inside the view from the balcony off the lounge area was extensive. As far as the eye could see there were jungle trees, palms and more trees. We stood on that simple balcony as the sun went down and sipped on a beer. That’s when I heard the rumble and the trumpet of two Elephants. I couldn’t see them, but I heard them down there in the jungle and I felt a chill of genuine excitement. It was going to be a very long night before dawn and my first encounter with an Asian elephant. 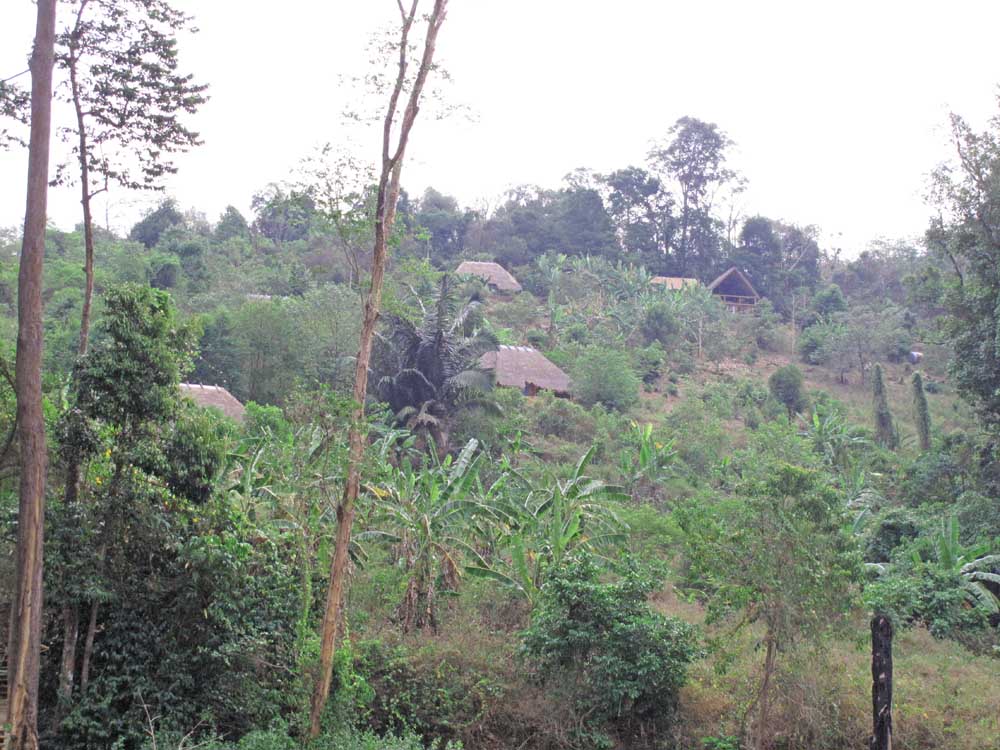 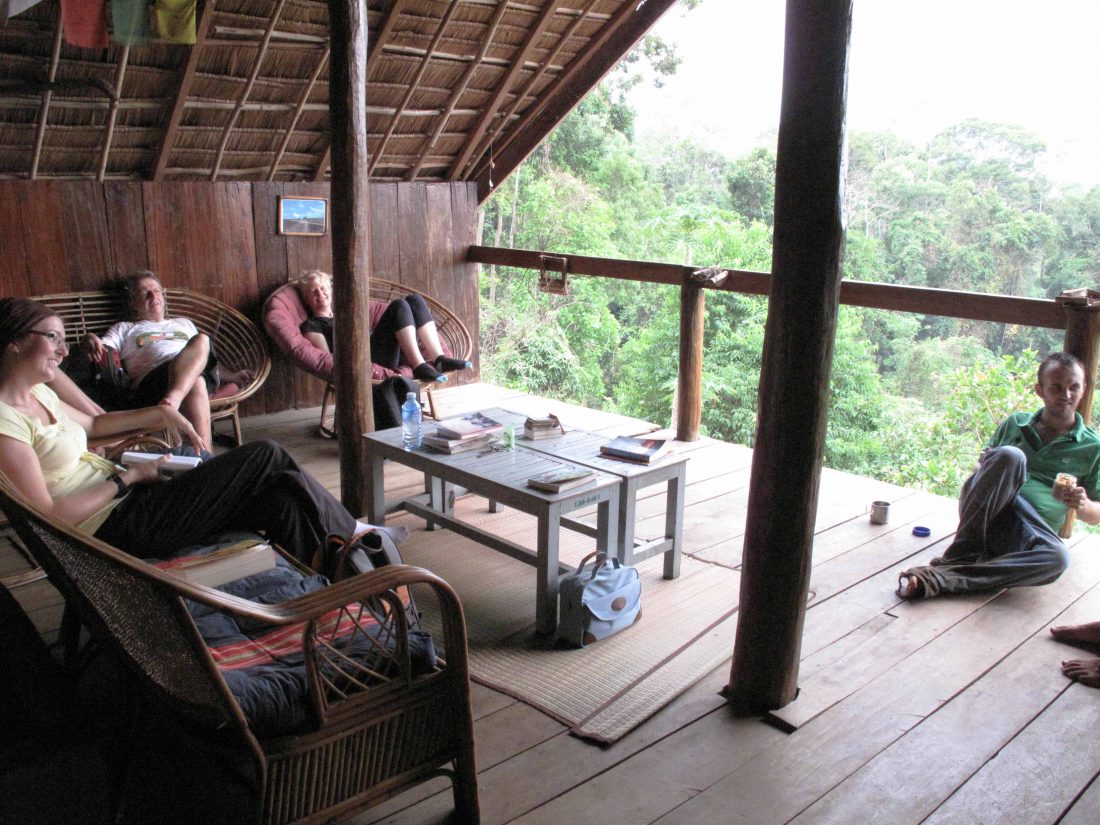 The jungle is a hard place to relax in, it’s hot and full of bugs… scorpions, spiders and mosquitoes  but each time you look into those Elephant eyes it is hard to believe the privilege of being here. 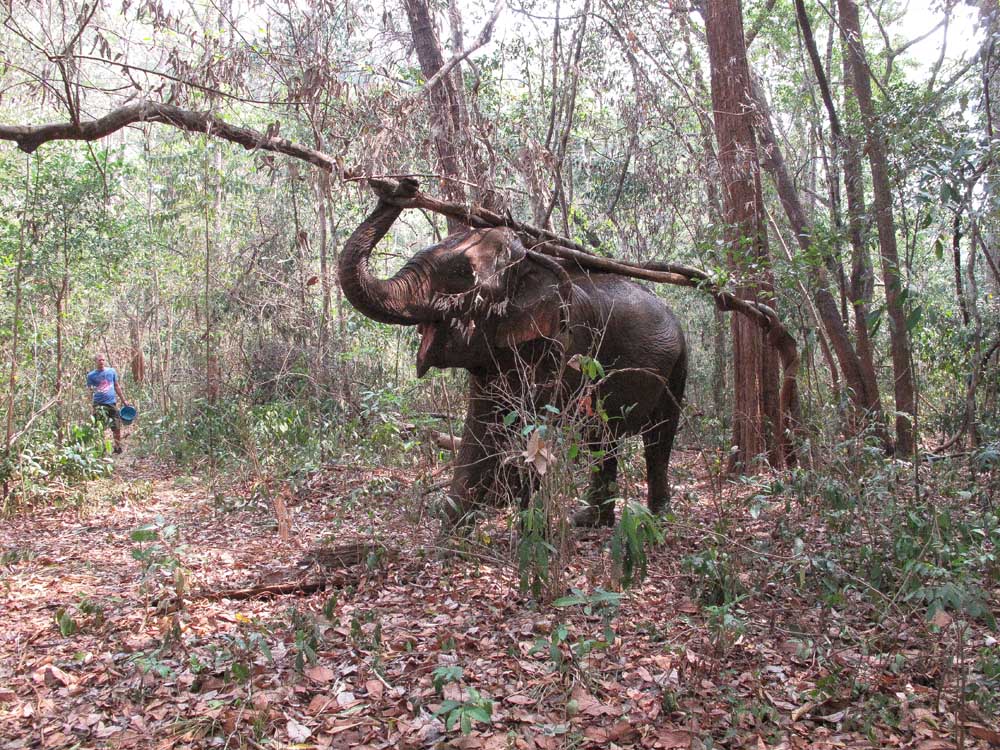 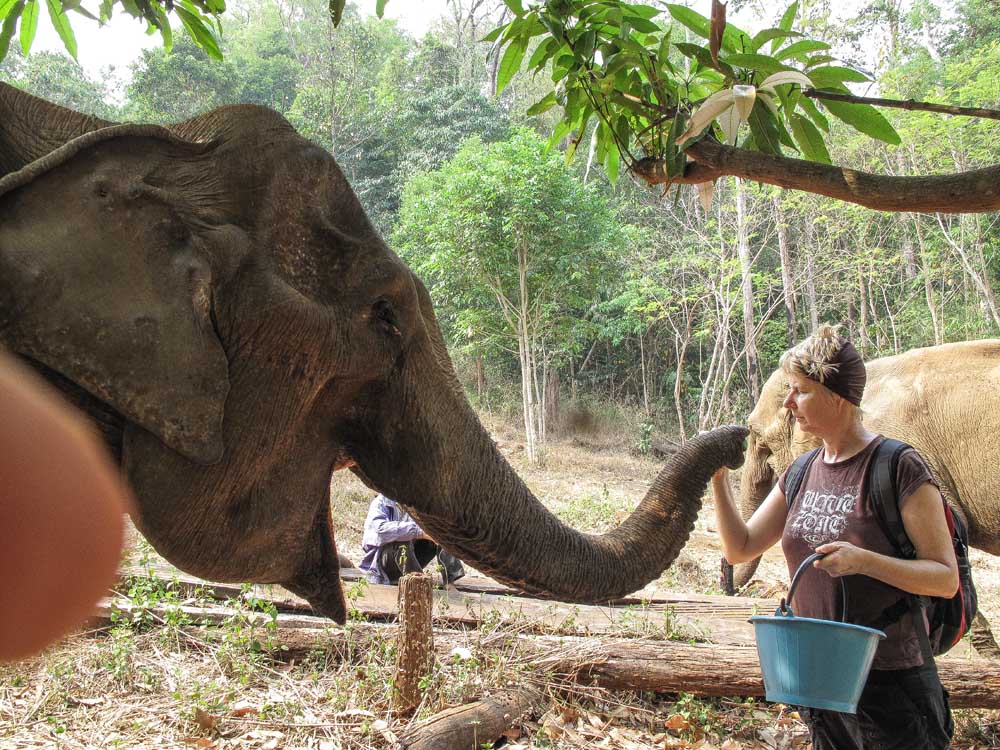 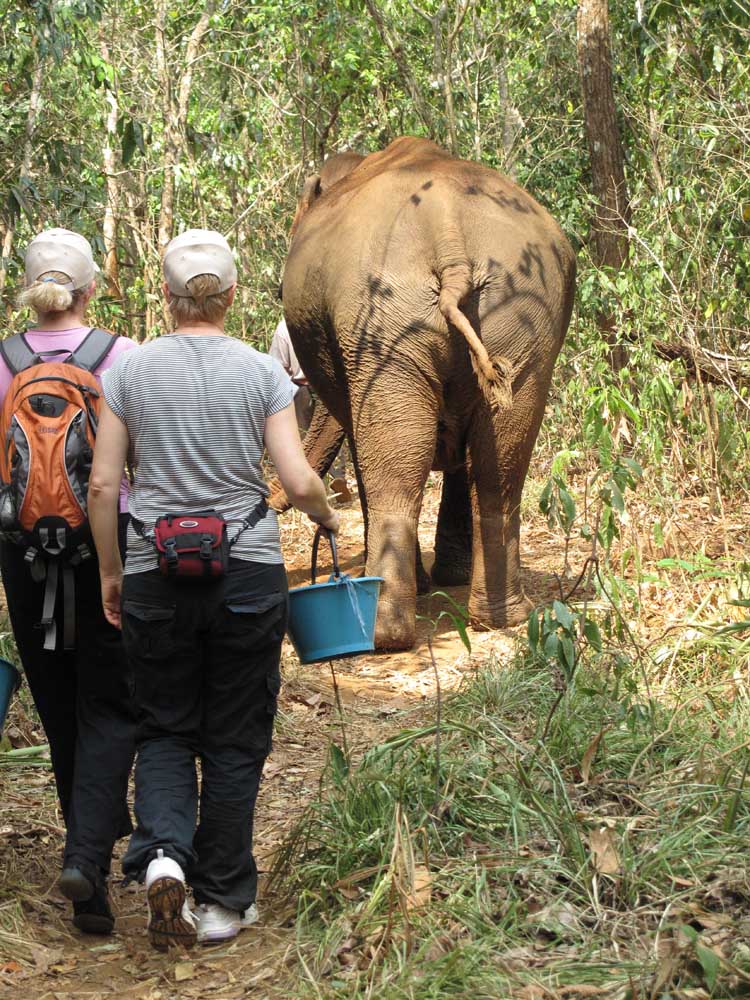 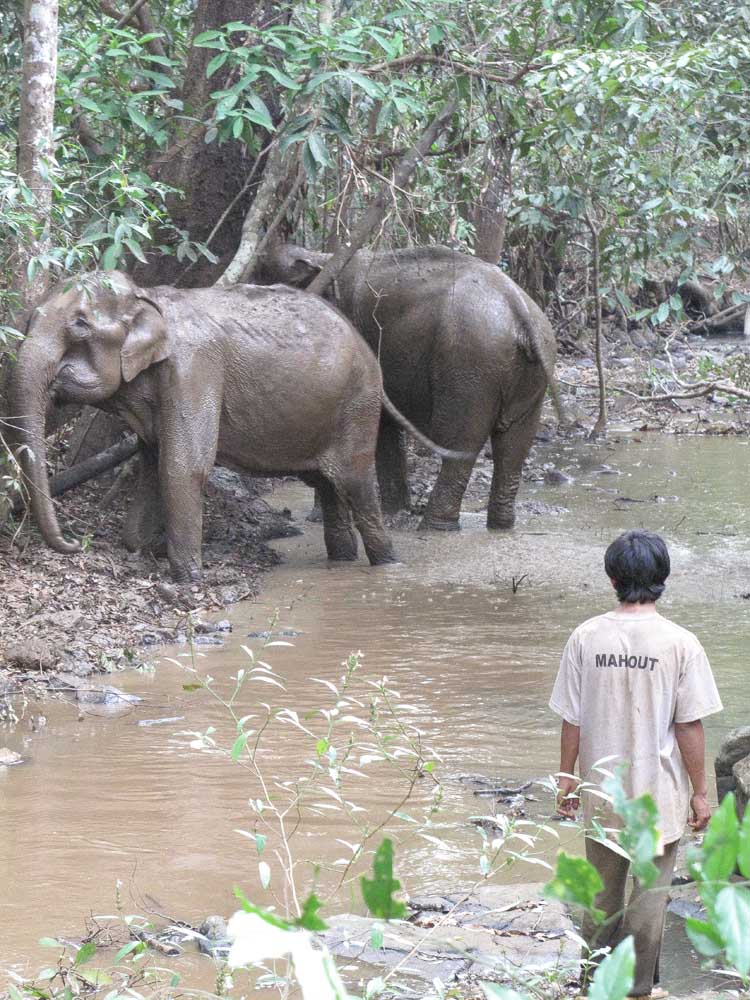 Sen Monorom is 380 kilometres east of Phnom Penh . Travelling to Sen Monorom whilst on holiday in Cambodia is easy …now that the road has been paved. Transport options include bus, minivan, private taxi, shared taxi and car rental. Whilst there visit Elephant Valley Project 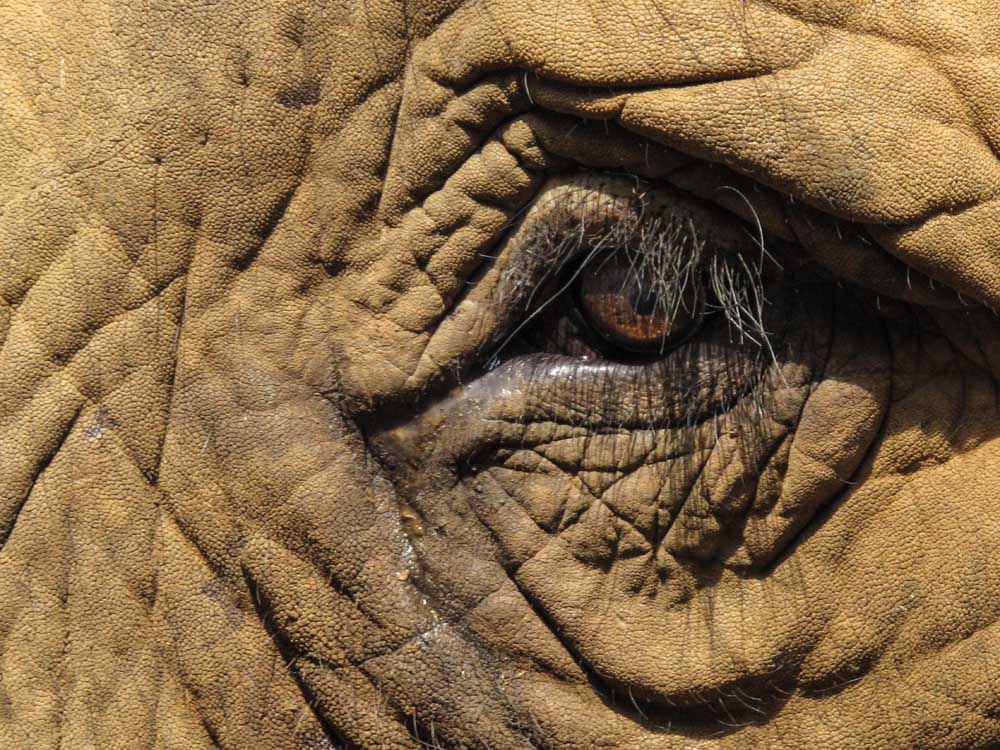