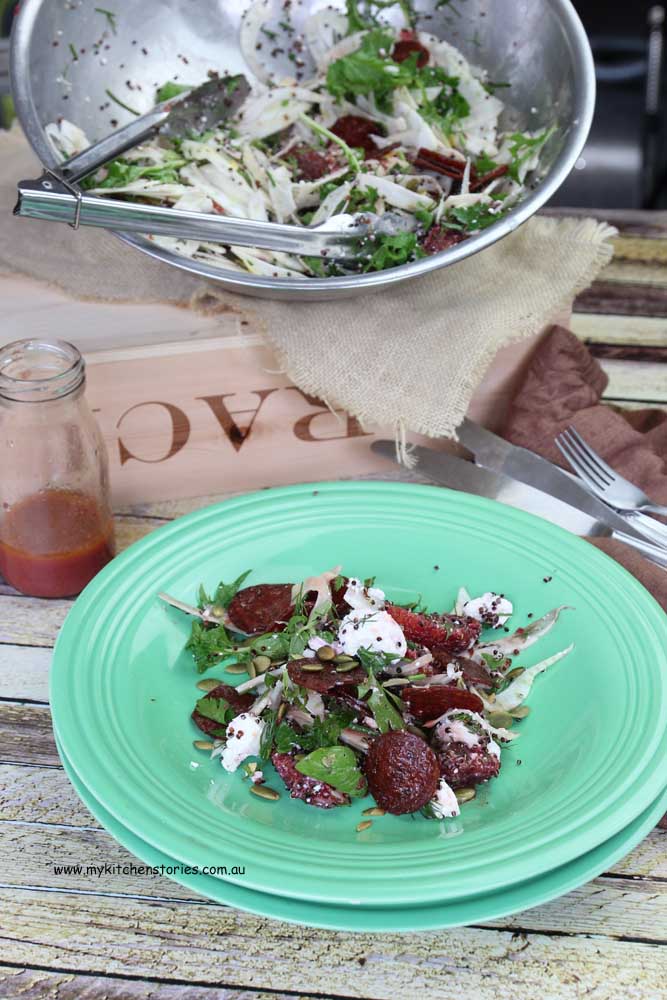 I have to admit that I love Salami and Chorizo and Kransky and all manner of small goods. I don’t often use or serve them as much as I’d like because of the amount of saturated fat that is is involved. And you know me by now, I’d prefer to save some calories so that I can slip in some sugar and other forms of saturated fat at dessert time.

But, last week I found out there is an alternative. This crispy crunchy sweet, salty , spicy salad is made with a new type of small goods. I was introduced to an Australian company,Oliving by Hans making smallgoods with Extra Virgin Olive Oil.  That’s a really good idea. It makes this crispy crunchy  Fennel, Blood Orange and Crispy Peperilli creation even better.

Small Goods made with Olive Oil?

The idea for these small goods originated in Greece, and after having great success they teamed up with Oliving by Hans in Australia. The traditional methods for producing charcuterie are applied. High quality meat is used as the base but some of the fat that is normally mixed in with the meat is omitted and Extra Virgin Olive Oil is added in it’s place. The meat and spices are mixed and left to mature in the usual way and the oil is naturally absorbed into the meat. There is no residue or olive oil taste, in fact the Peperilli I used had a nice sour matured flavour just the way it should. 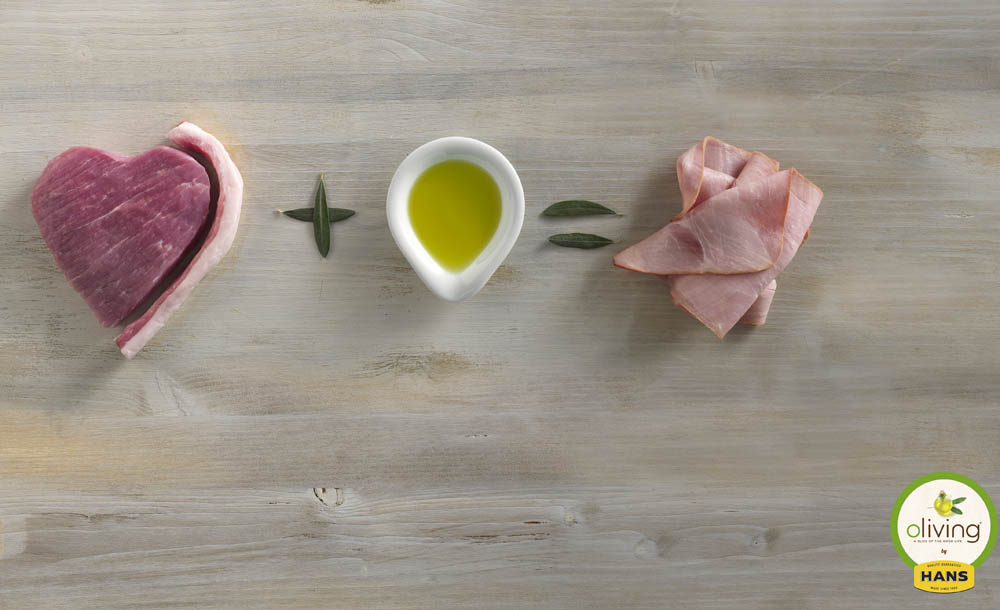 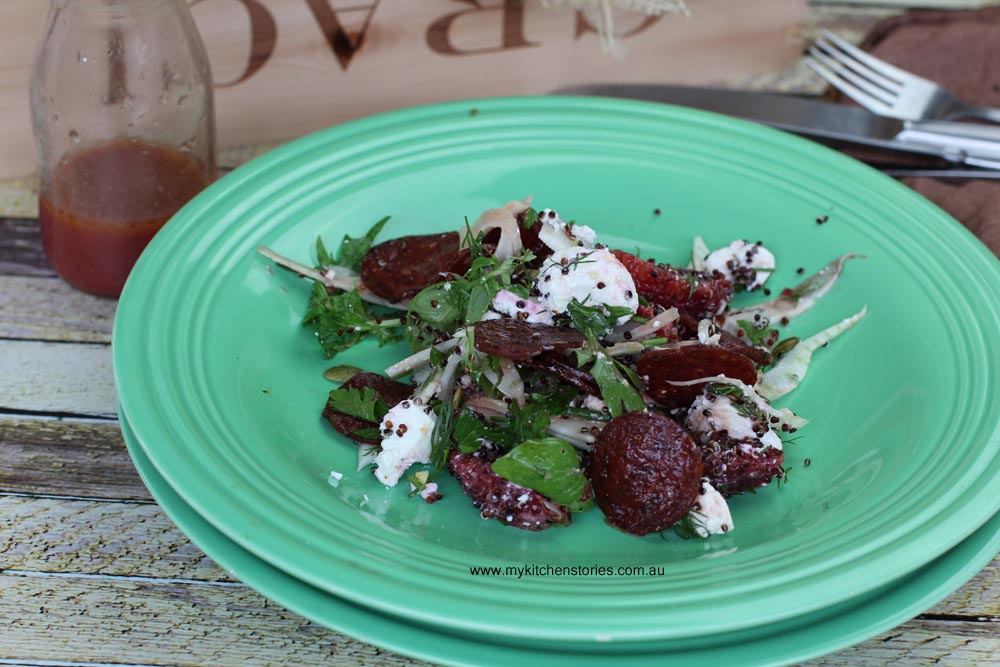 If you are hearing a little bit about Oliving by Hans this week, it’s because they got together with clever Marmot Inc. in Brisbane, Melbourne and Sydney to find a creative way to let people know about their new range of products. Guest chefs were invited to cook with the products and a range of bloggers specializing in recipe development and healthy food were invited to each event. Each city  has a great video of their special event.   Maureen@ Orgasmic chef  has a link to each and a recipe using the low fat hotdogs. It’s a great way to meet fellow eaters and bloggers for us, and a fearless way to have potential critics try the products.  There will be lots of ideas and also recipes for using these great tasing products.  So far I  am inspired by the creative recipes and photos from Sara, Amanda Peter and Sandra. Would you like to see what happened on a night at The Shirt Bar in Sydney amongst the men’s clothes, the adept barman with Lilac hair and the  Gin, Lime and Black pepper cocktails?. We didn’t stop eating….or talking and all agreed that if this is low fat, then we approve. Here’s what happened to us. 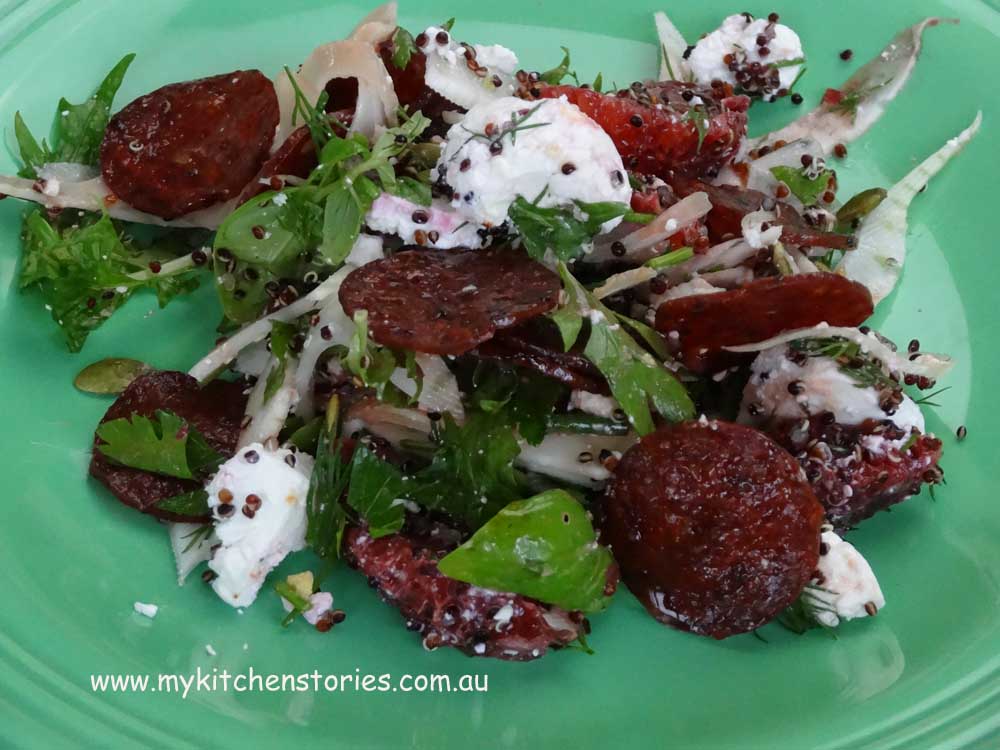 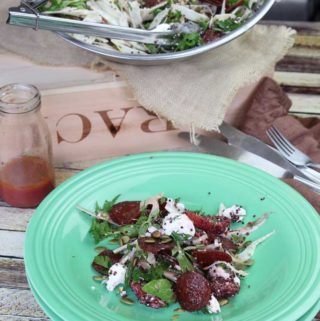 This is a delicious summery salad. You can also crisp the Peperilli up on the BBQ. i've added a 1/2 cup of quinoa , this gives the salad a nice crunch
5 from 4 votes
Print Recipe Pin Recipe
Cuisine Salad
Servings 4

You can also use cooked Farro, Frekkah or even couscous or brown rice in this salad too 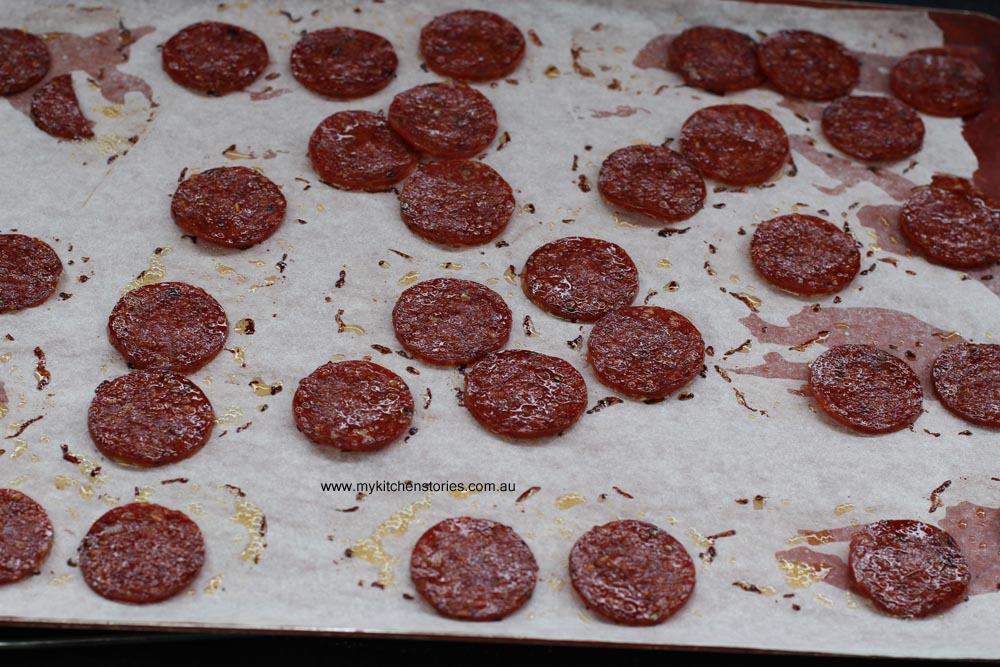 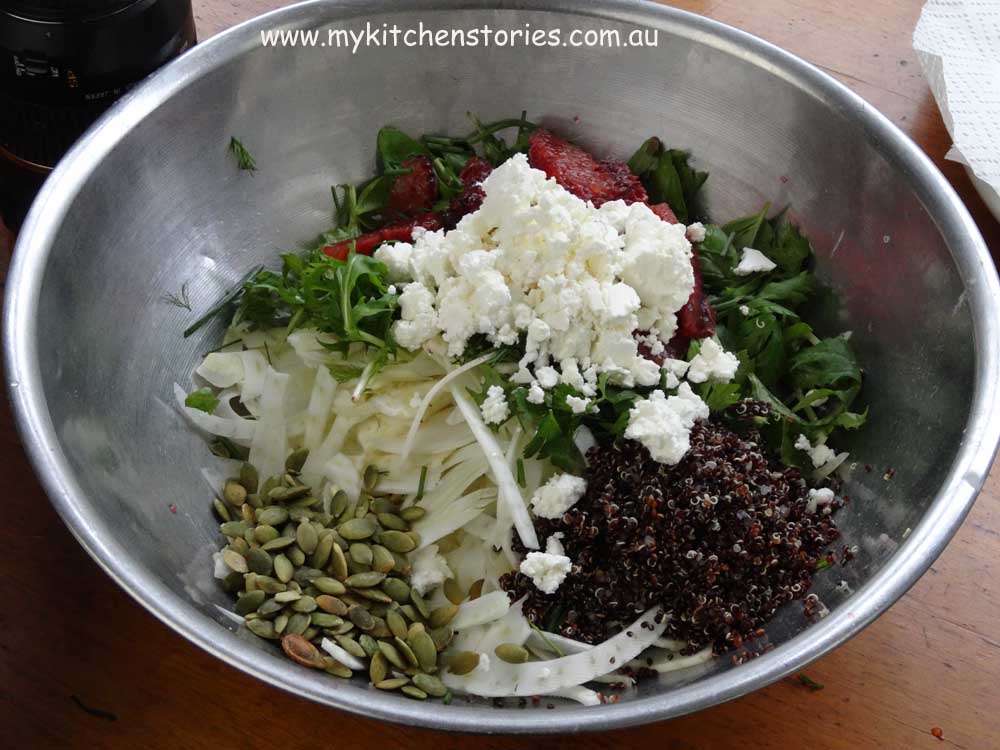 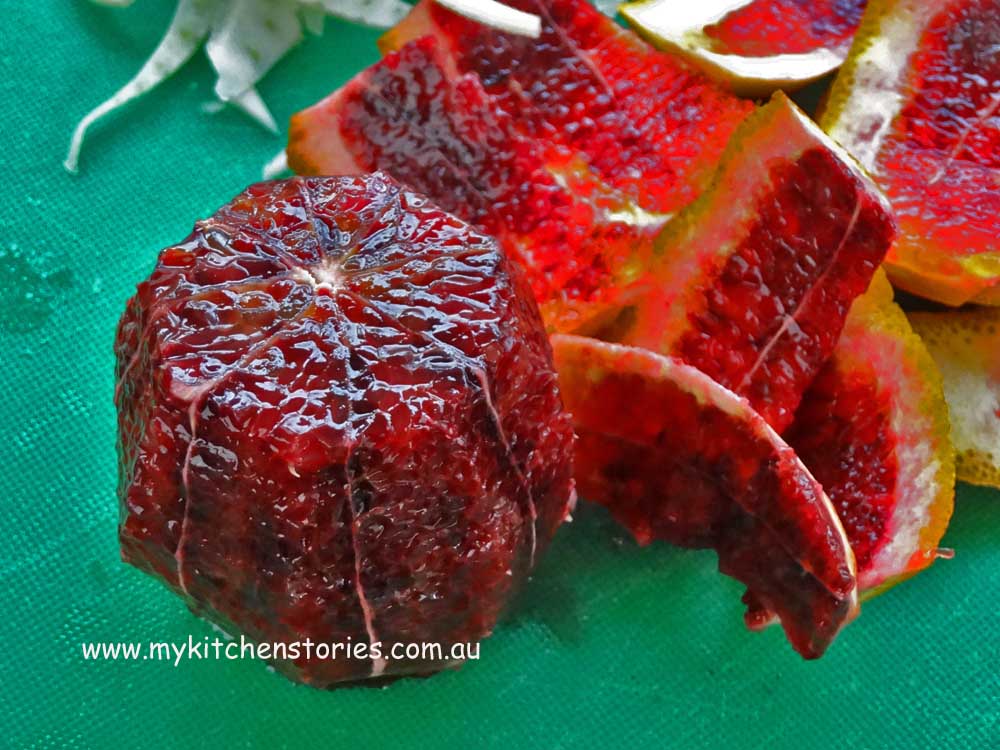 This post was sponsored Oliving By Hans and products were supplied to me to create recipes with. Oliving by Hans products are available in selected Coles, Woolworths and IGA stores. 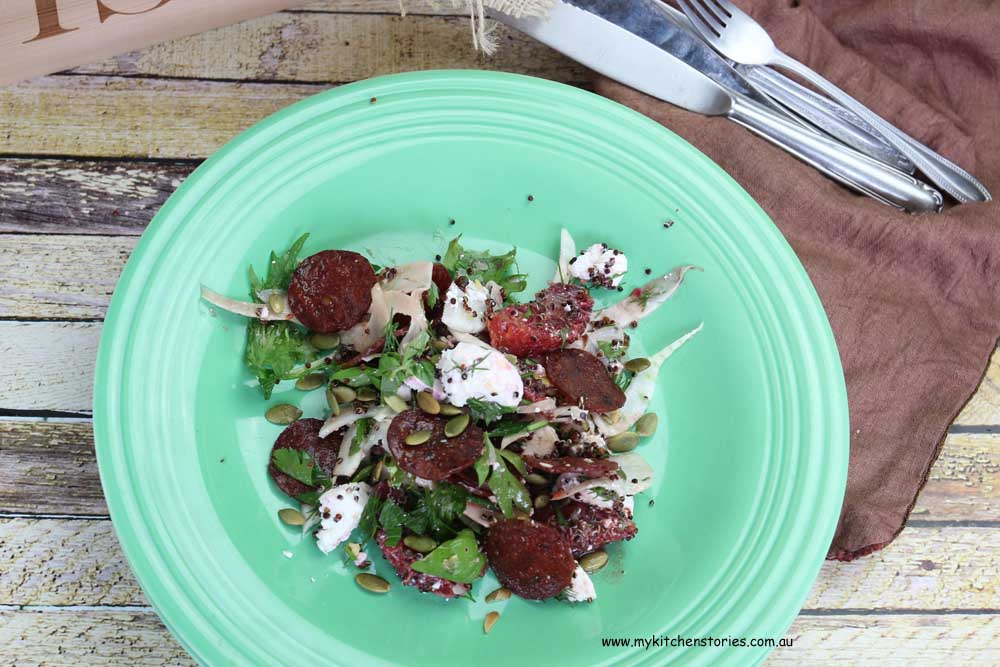