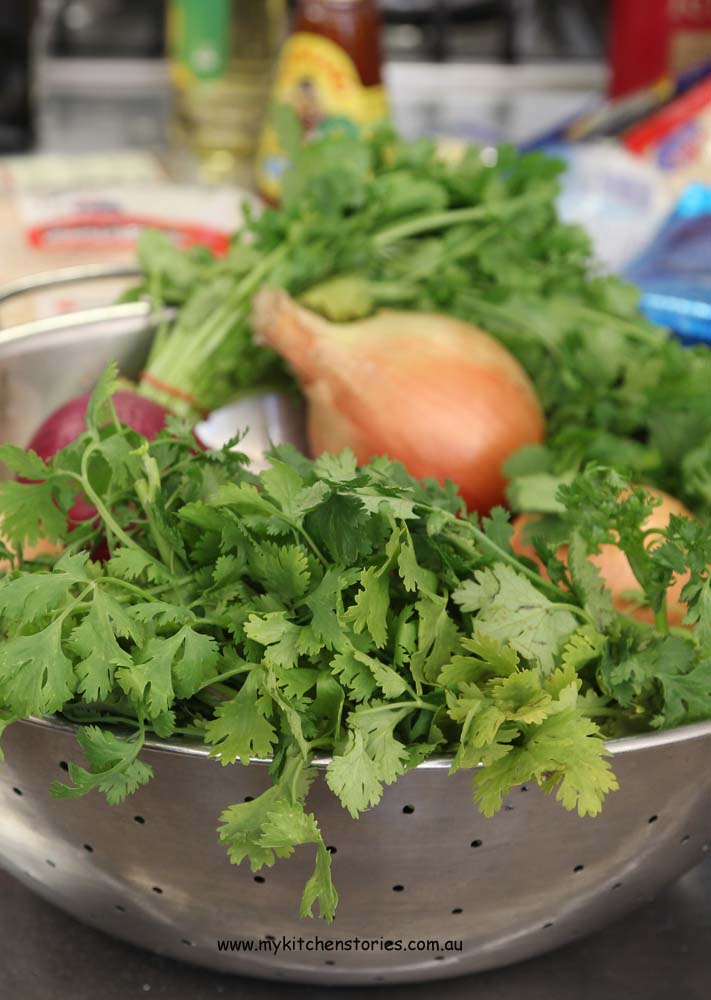 On the odd occasion that I am not rushing from work to home and cooking till the wee hours I stop to consider that I do nothing to help others. I am not happy that this is the case and I would like to be able to contribute more, especially to refugees who more often than not struggle to find a way to connect with their new Australian communities and find employment.

That’s when it happened…. I discovered Culinary tales, and I decided that this was a small window for me to provide some support and a bit of blog space to helping refugees. Not in a direct monetary way, but by helping to showcase how we can provide employment and engagement with the community through food.

“”Culinary Tales aims to provide refugees with work experience by giving them the opportunity to run a cooking class to showcase their exotic cuisines”
I went to a Yemini cooking class and now I am telling you about it so that if you are a cook, and have a fascination with food, cooking, culture and people then this is for you. 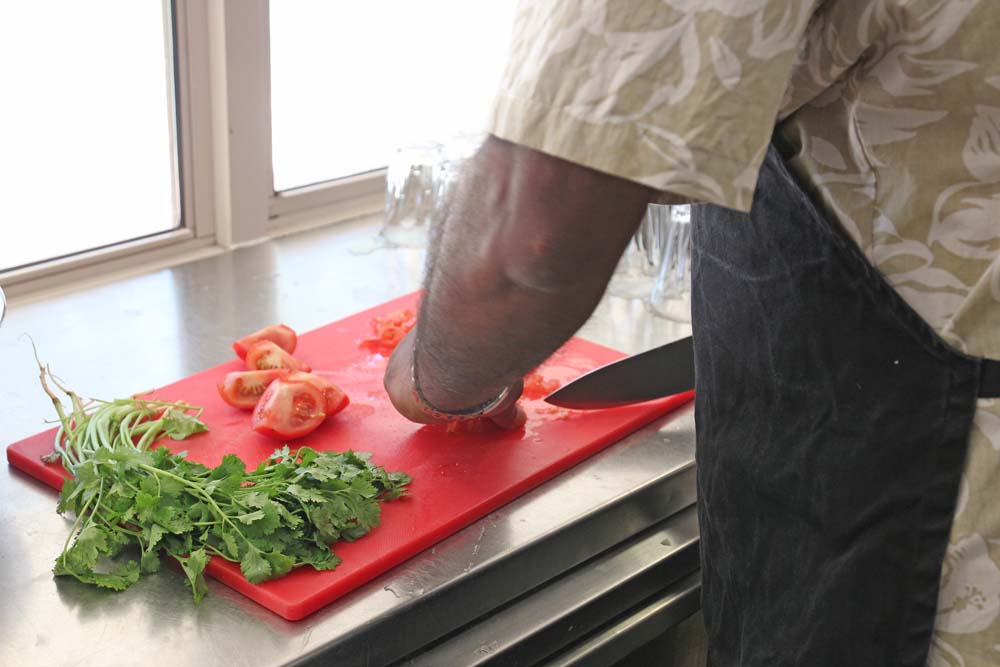 Refugees experience a very high rate of unemployment. Even highly skilled or qualified people find it very hard to find a job and become isolated in a community they have no way of negotiating. The Culinary Tales program provides refugees with an opportunity to gain work experience through showcasing the food of their homeland. They get work experience by running a cooking class, organizing, planning and then hosting the class. Afterwards you get to eat the food.  That bit, will probably get most of you convinced. 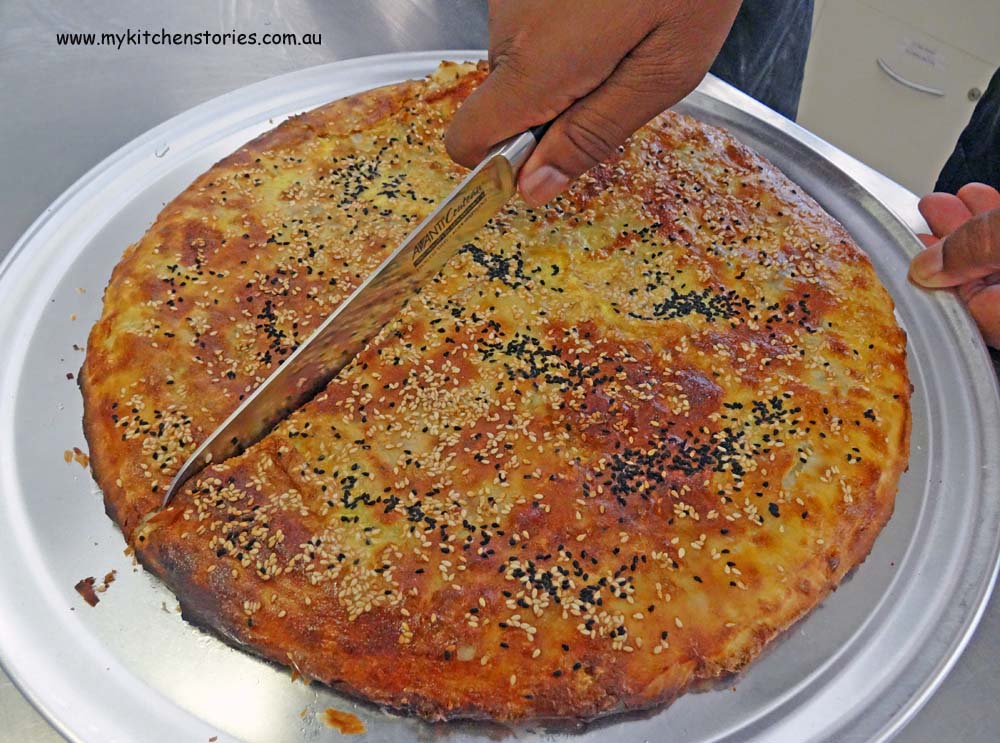 Classes are around $65.00 with that fee going towards paying for the ingredients, the space, a bit of pocket money for the cook and the valuable work experience that goes with it.. On the day I attended there were just the four of us , so we had plenty of time to ask questions and take turns stirring the pots. Our teacher today is Rania, who was originally from Yemen. After some years in Malaysia she is now in Sydney and trying to settle in. Ayoub, her husband has just got a job as a chef in one of Australia’s very few Yemeni restaurants, Wadi Hadramawt, in Auburn, Sydney. She is trying to find work in the food industry too, so has joined this program to get experience. 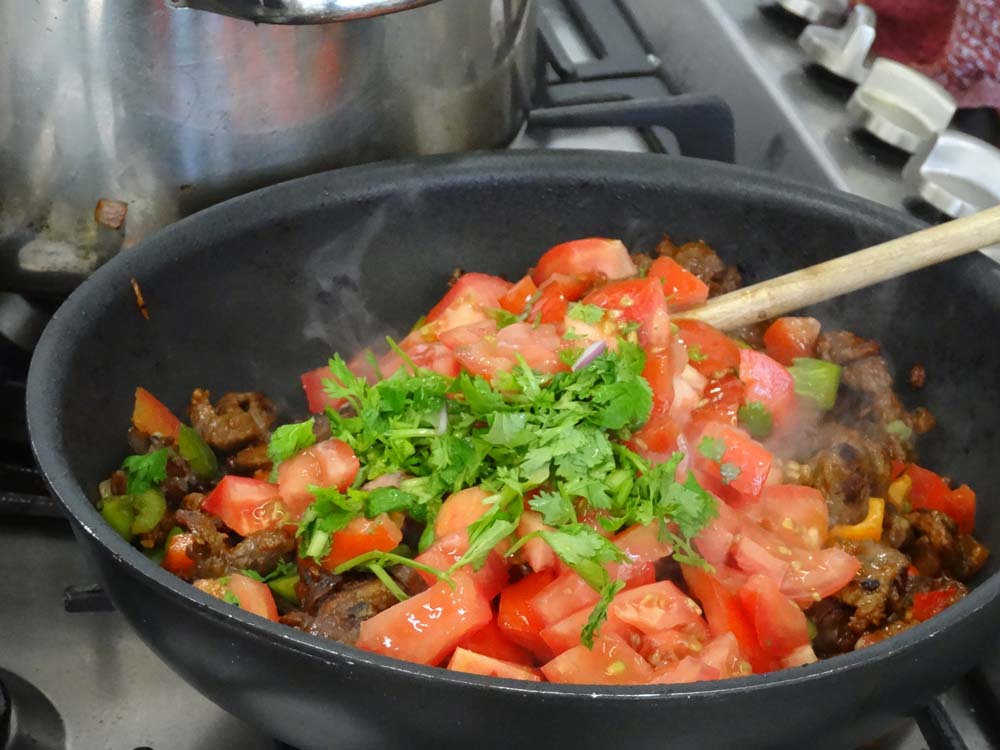 Yemen is in the Middle East, occupying the south western end of the Arabian Peninsula, it’s bordered by Saudi Arabia to the north, the Red Sea to the west, and Oman to the east.

Yemeni Cuisine is not common in Australia and I found the idea of our “chef” Rania quite fascinating. She was a little shy and unsure and she works around the boiling pots and hot ovens in her head to toe attire while some of the participates wear singlets and short pants in the heat of the kitchen. In the north of Yemen the cuisine has been influenced by Middle Eastern food, while the south has more of an Indian influence, due to the English establishing a trade route through here in the 1800’s. There’ s a broad variety of terrain from desert in the north to arable pastureland and two distinct mountainous regions in the east and west. The Tihamah (“hot lands” or “hot earth”) form a very arid and flat coastal plain along Yemen’s entire Red Sea coastline. They cook with beans, lentils, potatoes onions, tomato, rice, eggs and spices like cumin, chilli, fenegreek, mint, ginger, fennel, paprika, chilli and cardamom. There is little dairy food but they do cook with ghee and buttermilk along with chicken, goat and lamb. The generous offering of food to guests is one of the customs in Yemeni culture, and a guest not accepting the offering is considered an insult. Meals are typically consumed while sitting on the floor. Rania goes on to explain that flat breads are a very big part of Yemeni Cuisine and that women spend much time making this staple. Her family and most others in Yemen make flat breads in a searingly hot “tandoor” style oven, that most people have in their houses. 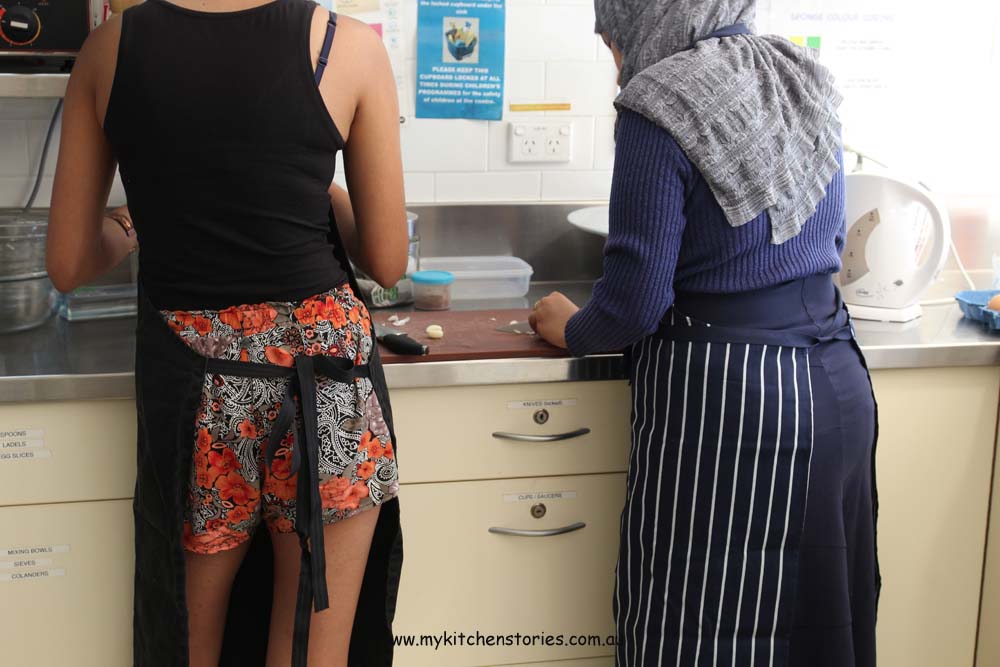 Today she is making one of Yemen’s most loved dishes Bint Al Sahn, a yeasted “honey cake” made with wafer thin sheets of dough that are a little bit like phyllo pastry, only they are made with yeast. Once cooked it is drizzled with honey, and eaten warm. Rania has also decided to make a savoury one too to show us that this is a recipe that is universally loved. It is eaten for breakfast in both the savoury and sweet version,  but it is also a favourite snack or lunch too. 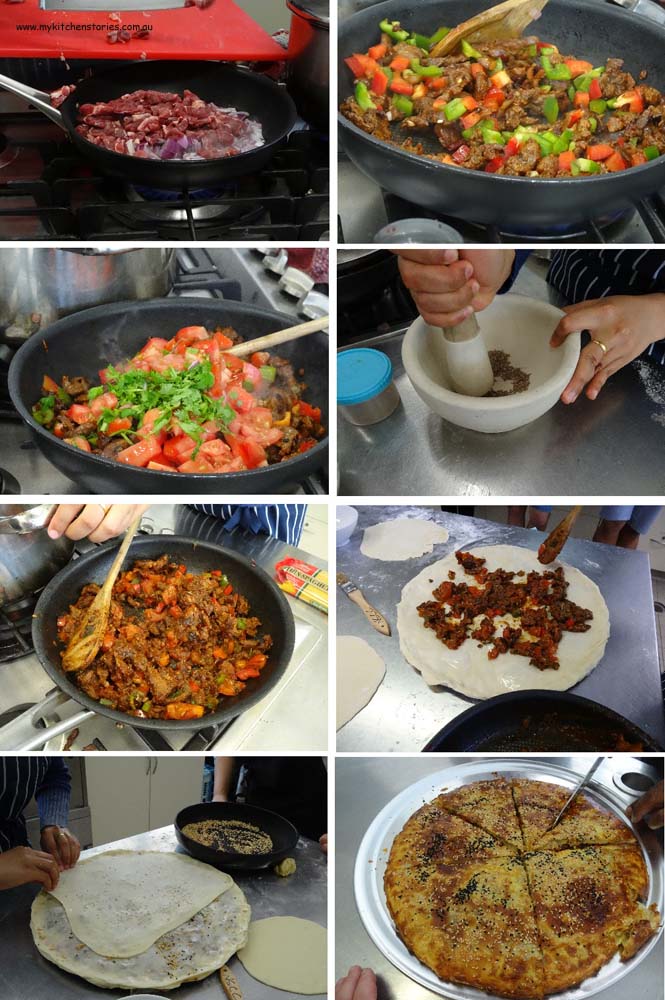 We also make a very unusual chicken soup using oats to thicken and spaghetti to give texture.  It is a chunky mildly spicy soup with a tomato base. The soup is finished with a special Yemeni spice that she has brought from home. Apparently everyone has their own secret blend of this spice they call “smoking pepper” and hers has dried green onion, paprika, cumin, chilli and other secret undisclosed spices that have been heated in a frypan to smoky perfection. The soup is a meal in itself and I can imagine it being shared with a whole family. The true delight for me today though, is the warm honey cake. The others love the savoury version that is a little like a meat pizza with 1000 crispy layers. But, before we are able to gobble it down there are a few obstacles to over come. 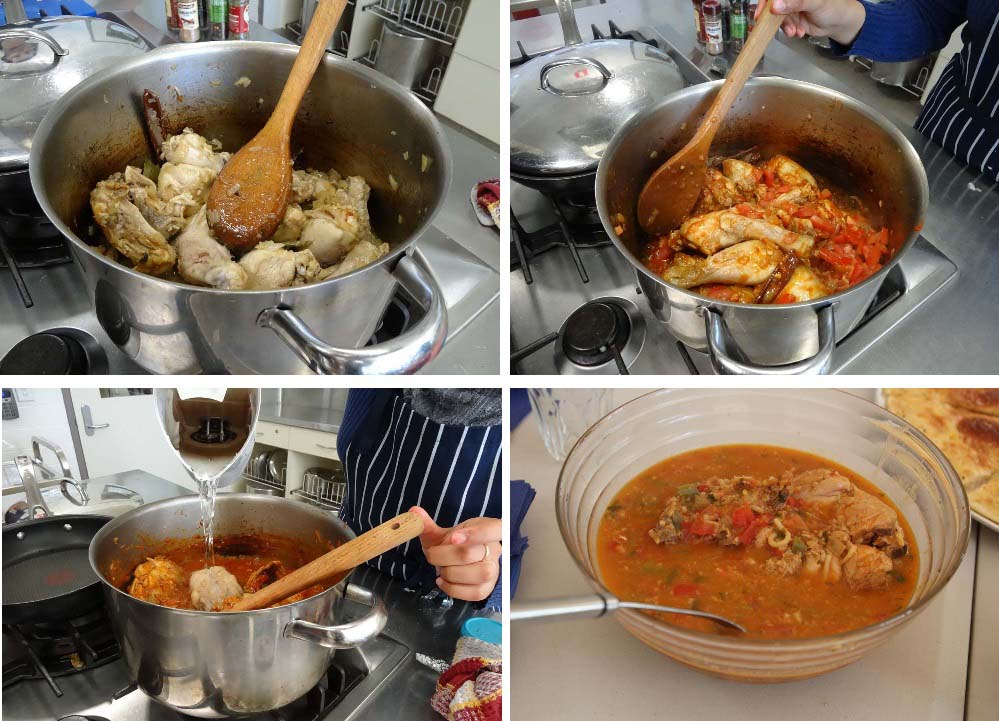 When the two large layered cakes are beautifully egg washed and sprinkled with seeds, they are ready to go into the two ovens that have been pre-heated for some time. No one has thought to check the oven temperature, or the ovens at all really and the  panic on poor Rania’s face is very sad when she opens the door to put the dish in and there is no heat at all.  One of the two ovens  doesn’t close properly, and so is also not very hot.  The stress level rises and I see that she is desperately wondering what will happen if she can’t actually cook the food she is demonstrating.  Tandoor ovens have no such problem but electric ovens?.  Well they can be very tricky indeed.

There is a bit of a comic moment where one of the class attendees- a man that does a lot of home cooking , steps up and tries to make some suggestions, taking control of the situation as best he can.  One of his suggestions is to stuff the door of the oven that doesn’t close with chux wipes in order to stop the heat escaping and to build up enough heat to cook the pastry. This is an honourably good plan but, as 2 or 3 people desperately stuff chux wipes into the door, it slips down inside the oven. I watch, while I run my eyes over the situation and try to come up with a plan. I remind myself that over the years I have been in many a situation like this and that there must be a solution of sorts. I got down on my hands and knees so I could inspect the oven controls, while the lovely gentleman peered down at me from above and asked what I thought I was doing?. I know he meant well………… but really?.

“Look you are just going to have to trust me. I have been working with ovens all my life and I am going to work out what to do”.

He looked at me for a moment and his lips moved a little, but then he had nothing to say, which really was fine because by then I was twiddling the dials and had set them on the settings I think would work. Sometimes stove and oven dials make no sense at all, and they just have to be controlled. I asked them not to open the oven for a couple of minutes. By now everyone was just staring at me. I really hoped I was going to know what I was doing….. 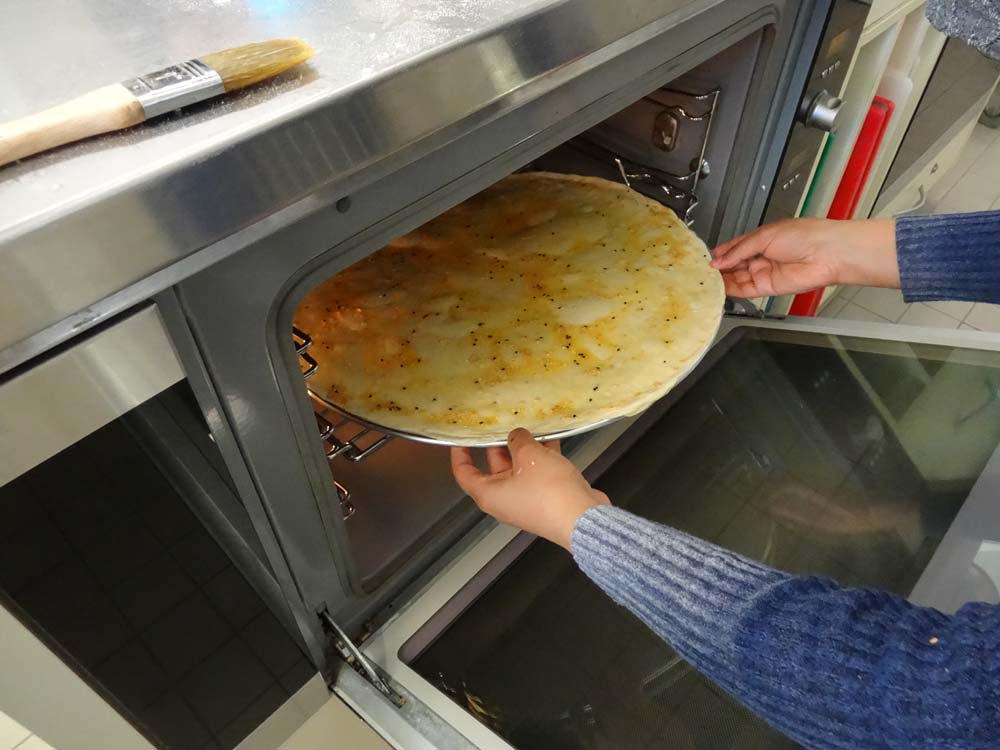 Meantime, I turned on the salamander. An excruciatingly hot radiant grill that occupies position at eyeline height in most kitchens. It’s affectionately known as the “sally” and it can cook or grill anything in a matter of minutes. It is a great source of burns and heat exhaustion in lots of kitchens, but it is hot and quick and …..well my life saver.  Ten minutes later everyone was standing around the kitchen watching the oven temperature rise in increments of 5 while asking me what that hot grill in the corner was for.

“Oh the Sally?” I said nonchalantly. “That’s going to cook the honey cake”.

Rania slipped the meat version of the cake into the oven that was steadily climbing up.  The honeycake went under the hottest of grills while the helpful man gave me instructions on heat settings to choose and told me to be careful not to burn it.. ( why thank-you…)  I turned it under the grill till I saw it was bubbling and browning and then I turned down the temperature and rotated it before I flipped it upside down between two trays and then cooked the bottom. Rania was very relieved and fetched the meat cake out of the oven. It was crispy and browned and smelled incredible. 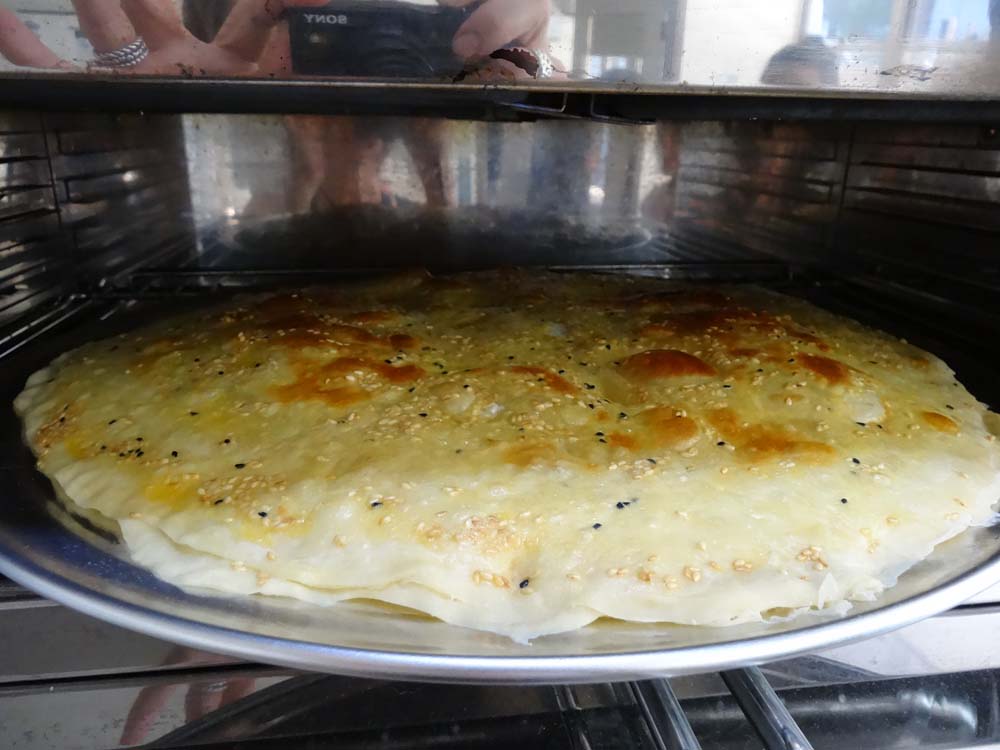 Bint Al Sahn under the “Sally”

Once everything was ready we  sat down together to eat and talk. The warm honey cake was smothered in honey that dripped off the warm crispy layers as we ate it. The layered meat filled cake was a favourite with the boys and that was finished in seconds. The chicken soup was a nourishing family style dish that has lots of hidden goodness- perfect for my house. 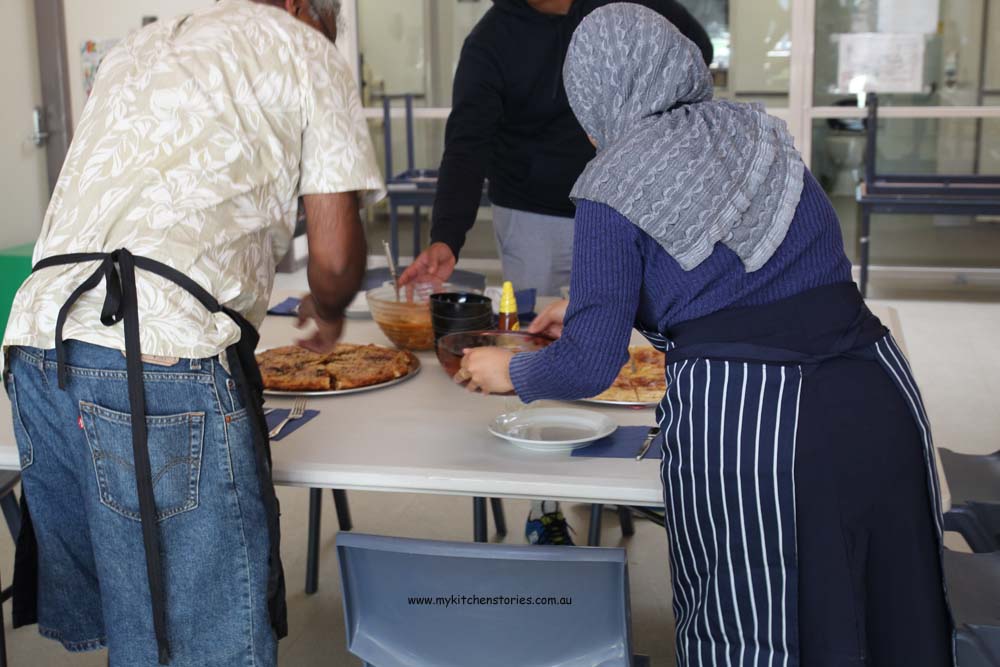 I’ve put together a little video of how we helped Rania make the Honey cake. As we were leaving she gave me an extra piece wrapped in a serviette. I took it and thanked her, thinking I would throw it out later, but I had finished it before I got to the harbour bridge a 1/2 kilometer away. 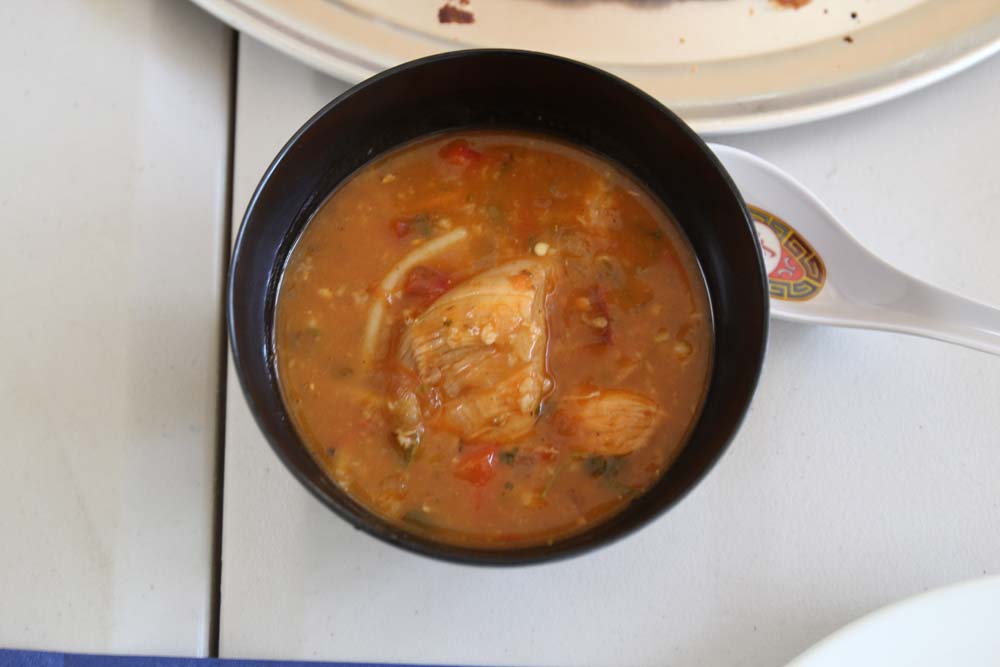 This is an invaluable resource for refugees. It’s run by Enactus- a Sydney University  program manned by volunteers. Its part of an international program that mobilize uni students to develop ideas to benefit the community. The students run and develop programs that they think will help a part of the community. This particular one supports refugees into courses related to these classes too, such as safe food handling, health and safety, and even hints ion running a good class. We all sat and ate together . A couple of the students said that this was their favourite part of running the program. I hear ya……..

If you get a chance to support the classes, don’t hesitate. Find the website below.