This Cuban Pork with Succotash is quick easy and filling. It’s such a great dish for summer. Smokey Cuban style Pork is perfect on the BBQ.

I had no idea there were so many great recipes on the Hello Fresh website, you can jump on there and whip something up, even if you haven’t ordered a box from them. Great ideas and simple recipes.

This Cuban Pork with Succotash idea is from the site. I thought it would be great to recreate because the Pork can be thrown on the BBQ, it’s extra delicious and surprisingly easy, given the satisfying taste.

The Pork for this recipe is Pork Loin. It is super simple to cook either for you and the family or a crowd. It’s almost foolproof as far as “steaks” go, either on the BBQ or in a frypan. The meat can be marinated or rubbed with herbs and spices and it holds all flavours so beautifully with minimal effort

Marinate the meat and leave it until needed. You can buy a loin from your butcher and cut it yourself or buy them already cut in the supermarket’s meat section.

The recipe starts with “Cuban Pork”. The flavours of this include a rub made with:

Cuban flavours are based on these great spices and often include lime or orange juice and zest. Lemon is generally easier to get a hold of but if you have an abundance of limes then use those! BBQing is something they love to do in Cuba getting that extra smokey flavour.

The Succotash in this dish is a legacy of the south of the US. It originated as an American Indian dish made with corn and lima beans both common crops in the south along with tomatoes and onions. In some parts of the South, it can be made with the addition of a roux similar to Gumbo. The roux holds it together and lightly thickens. But, I prefer this light and easy version that is perfectly delicious, gluten free and can be made ahead if required.

Succotash is such a fun word to say, don’t you think? It is clearly a well-loved dish judging by the many versions and variations you’ll see throughout the south. A creole version of this contains andouille sausage (crumbly chorizo like sausage) as well as Shrimp, smoked ham and okra.

Use any beans you like, I’ve even seen it with rice but it must have corn. Corn is the staple. In this recipe, HF uses kidney beans which have a nice bite and great colour. You could also use black beans for a southern and Cuban feel too.

Make it ahead of time, so you are ready and relaxed!

This succotash recipe is fresh and quick with a hint of lemon and coriander so that it marries this delicious Cuban Pork steak. I’ve also added a bit of creaminess including a lemony mayo to drizzle over the top.

It is served warm but you could even make it ahead and serve it at room temperature, or lightly rewarm. Or just bang it together for a quick easy dinner right away.

Below are the simple ingredients you will need to make it. Corn, Spanish onion, garlic, lemon, spices and kidney beans, along with those Pork steaks.

The delicious Succotash is lightly sauteed together until just softened and warm.

I’ve added my own spin to this recipe but there are many more on the Hello fresh Site. This post was supported by Hello Fresh 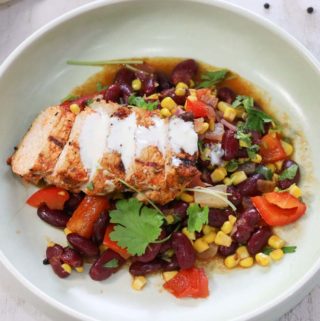 You can add red capsicum to the succotash if you like. I use powdered garlic on the meat so it doesn’t burn as easily on the BBQ or frypan For up to 6 people double the recipe. I don’t add too much juice to the pork marinade as too much will ” cook” it before it is BBQed.
Keyword maincourse, pork, succotash