When grilling time comes around why not give this wonderful warm salad a try on the BBQ. Crispy hot salami and grilled brussels sprouts make this a must. Don’t skip the smoked mozzarella

It seems that Barbequing is still a man’s domain. Men are expected to turn the snags at the family get together. Don’t get in their way.

After years on the grill in restaurants managing to juggle a multitude of orders for different meals cooked to order, I am still treated like an interloper if I offer to wield the tongs at a BBQ. Even though I am sure I can BBQ much better than most male people I know, I feel like I’ve entered the wrong locker-room and duly scuttle back off to the kitchen with the women.

Despite loving to grill we don’t have a BBQ at our house, and Skater and I often stop by the shops to look at all the BBQs.

It’s a strange thing that my son, who is not so interested in food really loves the whole idea of a BBQ. It could be the natural lure of the men’s business, I am not sure, but on a trip to the Supa Centa to get a new printer on the weekend we took a detour past Barbecues Galore, the BBQ store.

Once inside the store we marveled at the wok burner on the side, monster-sized BBQ’s and oo-ed over the large lidded grills. When a salesman sidled up and we started to chat. He suggested we should look at the Ziegler and Brown or the “Ziggy” – “Because if you guys don’t have much room and you live in a rental house,  it’s easy to move anywhere you go.”  So, even before we were able to tell him we were really just dreaming, he gave us a rundown on the Ziggy.

It looks a bit like that famous brand of flip-top BBQs that have been around forever. So I asked what the difference is and apparently it’s all about the burners and the high dome. This Ziggy is designed to cook perfectly with the lid up or down because there is more burner coverage, more heat in the double or triple burner. The salesman suggested using them together for high heat or independently for a gentle heat or when there’s just one or two people.

The BBQ seems to be a man’s domain?

He went on to say how he bought one on special and that he bakes and roasts and even makes pizzas in his………..all the while he talked to my son, who was exclaiming superlatives like…awesome & cool & sick.  They bonded over the flame thrower on each burner. It was surreal, a bit like I had walked up to a group of men barbecuing in the park. Secret BBQing business.

That’s when things came to an abrupt end. I told him that we were just dreaming. We left the shop to go and get our printer chatting about where we’ll put our Ziggy one day.

I got home and still dreaming, thought of what I could make. I wanted a recipe that was all about the thrill of the grill, that used the idea of the lid, and the smokey chary flat grill. I came up with this warm BBQ Brussels Sprouts, Grilled Salami, Smoked Mozzarella Salad. If you don’t like sprouts you can use cauliflower or potatoes or even fennel. 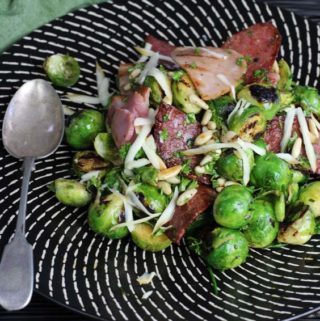 Make this warm salad on the BBQ and take the cooking outside
4.5 from 4 votes
Print Recipe Pin Recipe
Servings 4

Looks like a little robot….Ziggy is exclusive to Barbeques galore. One day Ziggy, one day..

This post was supported by Ziegler and Brown and I still wish I had one.